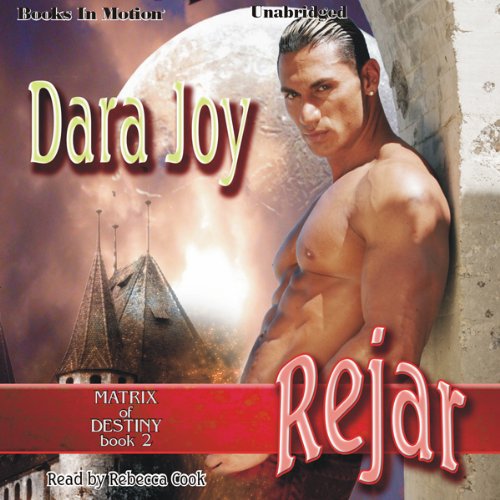 The Cat's Meow. Lord Byron thought he was a scream; the fashionable matrons tittered behind their fans at a glimpse of his hard form, and nobody knew where he came from. His startling eyes-one gold, one blue-promised a wicked passion, and his voice almost seemed to purr. There was only one thing a woman thought of when looking at a man like that. Sex. And there was only one woman he seemed to want. Lilac. In her wildest dreams she never guessed that bringing a stray cat into her home would soon have her stroking the most wanted man in 1811 London...Rejar.

What listeners say about Rejar

read the paper back years ago

Fun listen. laugh out loud situations. Creative alternate universe, great romance with some some steam. . I was glad I purchased this book in audio. I waited a long time for the author to write more than this trilogy. But it never happened. I always wondered why and then somone who made comments here enlightened me. I hope she will write more. I all ready purchased the second book. The third I will get for my collection in " night of a trillion stars". I think they stand alone as individual stories. So I never minded reading or listning to them out of order.

I liked this book

I would suggest this book more so than the first book in this series. Although there were times when I wish the plot would pick up.

I loved the sarcastic comedy and the character Rejar.

When Rejar appears as a cat.

Truly an excellent story. Enjoyed it from start to finish. You wont be disappointed.

I didn't like Rejar as much as I did Lorgan, and this is because he forces himself on Lilac a few times. it's an ugly thing, told in the way of some regency romances. I suppose that's because it's set there. I n any case, the adventure itself is decent of not a little old fashioned.

If you could sum up Rejar in three words, what would they be?

What other book might you compare Rejar to and why?

This was hands down the hottest romance I have ever read. There should be a warning label

Over the last few years, I have sold or donated most of the "paper" books I owned in favor of eBooks or Audio Books, but this is one of a couple dozen I kept - until it was available in eBook and Audio. It is the perfect mix of fantasy, good characters, and extreme sexy.

Are you a " Crazy Cat Lady " ? Do you sometimes look at your cats and dream that they were more than a cat? If you answered yes to my questions than this series of books are just what you'll love . I am known as the " Crazy Cat Lady Living in the Basement" , since reading this and then getting it on audibles I haven't been able to look at my cats the same. I swear you'll love them too .

Learn how to pronounce words properly.

I really enjoy these books by, Dara Joy. However, the reader needs to look up proper pronunciation of words used often but must be foreign to her...especially the word "lithe". It has a long 'i' sound, not a short 'i' sound. Drove me nuts! There were a few others, but that one was ridiculous. It is the same as reading a book full of grammatical and punctuation issues. It distracts from the enjoyment of the story. I happen to like Rejar, and was glad to see his story. I am in the process of listening to, Mine to Take, and it is the same problem.

this book is absolutely amazing a must !

If you could sum up Rejar in three words, what would they be?

The story line was very creative an original

Have you listened to any of Rebecca Cook’s other performances before? How does this one compare?

I enjoyed it from the first page to the last.

If you don't read or listen to this book you are missing out!

Delightfull book. Did not want to stop it, to go to bed. Looking forward to book 3.

What an absolute delight this book is. Kept me chuckling and laughing out loud most of the way through it. I more than look forward to the next book.