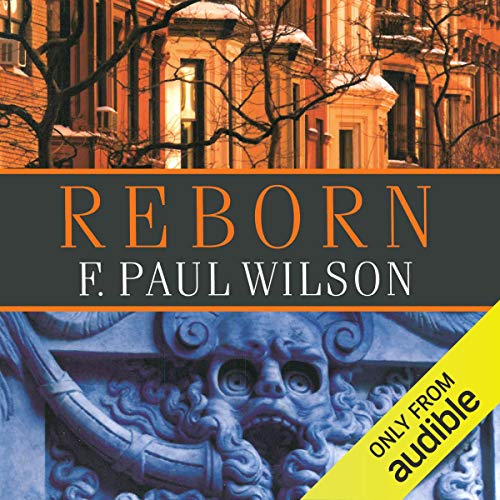 Fans of the Adversary cycle can't stop after book three; this fourth installation, Reborn, illuminates F. Paul Wilson's bigger picture. When Jim Stevens comes into a large inheritance, he thinks he has finally found his biological father. In fact, the truth turns out to be much stranger than he - or we - could've ever expected… Kurt Elftmann's performance takes the cake here. His varied pacing, deliberate and firm, harnesses the mysterious tone. While not over-the-top, his performance demonstrates animation and enthusiasm. Listeners looking for a sci-fi, horror, and adventure mash-up will enjoy this curious tale of ancient evil.

When an ancient artifact dissolves in the hands of a man calling himself Mr. Veilleur, he knows something has gone wrong…terribly, cosmically wrong.

Dr. Roderick Hanley, Nobel Prize-winning geneticist, dies in a plane crash. His last words: "The boy! They’ll find out about the boy! He’ll find out about himself!" When Jim Stevens, an orphan and struggling writer, learns that he is the sole heir to the Hanley estate, he is sure he has at last found his biological father. But he’s only half right. The true nature of his inheritance - and the truth about his conception - will crush him.

In New York City a group of Charismatics has been drawn together - without invitation, simply showing up at a Murray Hill brownstone - with a sense of great purpose. Satan is coming, and they have been chosen to fight him.

Mr. Veilleur, too, has been drawn to the group, but he realizes it’s not Satan who is coming. Satan would be a suitable au pair compared to the ancient evil that is in the process of being reborn.

What listeners say about Reborn

Been about 25 years since I read The Keep and this is a terrific sequel to it.

I started reading the adversary cycle about 1987 and at the time had only been able to find the first three books. Life got in the way, and here I am, almost 30 years later, completing the quest. This series, as well as the Repairman Jack novels, has been great. I am looking forward to the rest. Now, I off to the Tomb.