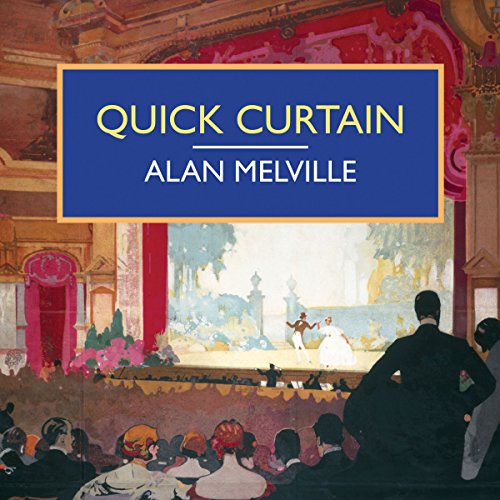 By: Alan Melville
Narrated by: Ben Allen
Try for £0.00

When Douglas B. Douglas - leading light of the London theatre - premiers his new musical extravaganza, Blue Music, he is sure the packed house will be dazzled by the performance. What he couldn't predict is the death of his star, Brandon Baker, onstage in the middle of act two. Soon another member of the cast is found dead, and it seems to be a straightforward case of murder followed by suicide.

Inspector Wilson of Scotland Yard - who happens to be among the audience - soon discovers otherwise. Together with Derek, his journalist son, Wilson takes charge of proceedings in his own inimitable way.

What listeners say about Quick Curtain

A very witty book, and a perfect imperfect ending. So much better than Alan Melville's other books.

This story was so boring that I gave up listening to it. I generally like books written at this time and I very much enjoy a comedy who dunnit, but not this one. I found it hard to remember who the different characters were, as they were so shallow. I've returned it.

Poor reader made the whole thing a chore

The reader really does a poor job. It's not the best story anyway, but then the reader sucks all the humour out of it by reading it badly. There's nothing specific I can say like he does accents badly (they're not awful when he does them) or gets the pronunciation wrong (does occasionally) but he just reads like he's afraid of the text. Slightly high pitched, anxious reading and it makes it hard to listen to.

I loved this mystery! It was very clever and laugh out loud funny in parts. The narrator was excellent as well!! Highly recommended!

But you will. Sayers reference is from the intro. Mystery is definitely mysterious! So read away!

Actually liked this a lot! A real period piece.

A different kind of twist.

A tongue in cheek take on the golden age detective story as well as theatrical folk. Fun and funny. As a golden age fan, I recommend reading this after you have gone through a number of the traditional mysteries to get the full impact of the twist. (But that's not required to enjoy this)

I enjoyed this vintage story. Lots of humor and humorous characters. I would read other books by this author.

What a fun listen!

Many giggles, excellent performance of witty author's pen, and a lovely and unusual ending. Gotta find more from this author and narrator

At first narrator made Inspector Wilson sound like a flake. But his voice improves as the book went on. Plot may seem stale to today’s readers, but it was fairly original to the people first reading it. I ended up enjoying the father/son conversations.

I’ll give you a second. Ok, got it? Brisk banter, breezy attitudes towards procedure and protocol, all founded in a professional knowledge of the ins and outs of life in musical theatre. Unlike most mysteries, where the listener needs to keep the suspects, clues and times-when-things-happened straight, all one has to do here is sit back and enjoy.

I confess that took some getting used to. As Dorothy Sayers said, “the aim of Mr. Melville is entertainment, and a fig for procedure”. Having just finished Freeman Wills Crofts’ The Groote Park Murder, a veritable handbook on police procedure, I missed the brooding pressure from higher-ups, the detailed medical evidence and the petty quarrels about jurisdiction. As a result, I wasn't as invested in the solution when it finally came.

Melville’s approach rings truer when, as in his delightful Weekend at Thrackley, his investigator is an amateur. On the other hand, it must be admitted that I laughed out loud very frequently. As Martin Edwards points out in his introduction, “Melville’s humor has worn better over the past 80 years than many would have expected”. Of course, Ben Allen deserves some of the credit for that, too. Though a tad languid in spots, he delivers each innuendo and comeback, every thrust and counter-thrust, just right.

Some humor, some mystery, a bit of cynicism. stick with it and you will be rewarded.

I’m not sure how I feel about this book. It is funny and the characters and scenes are enjoyable. It isn’t a great story though.

This story breaks the standard formula. The inspector is not a genius and both he and his son are rather bumbling. Like in life the stage manager is the only person of any intelligence or ability.