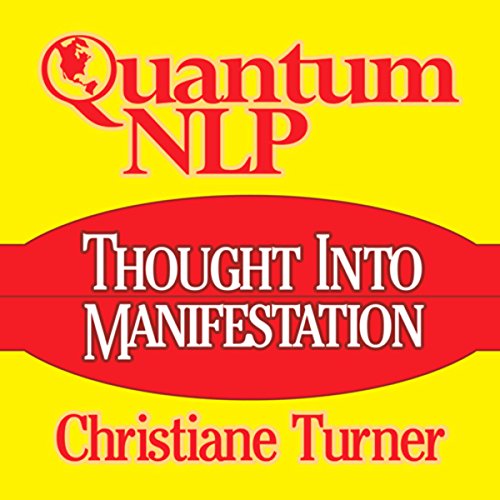 Quantum NLP is the art and science of human excellence. New scientific discoveries show us clearly that we are creating our reality through the use of our language. By teaching ourselves more effective language patterns, our brain automatically forms new neurological pathways that naturally lead to new behaviors and habits.

Christiane Turner, who has been perfecting her skills for two decades, is quickly becoming a worldwide thought leader in the cutting-edge field of Neuro Linguistic Programming (NLP) and has taken it to the next level. With her beautiful voice and European accent, she invites you to join her on a magical journey into the realm of possibility and change as she teaches you to:

Starts well, giving good examples of techniques in the beginning but focuses a little too much on her personal experience which are a little geeky unless you are a middle aged mother. I threw the book away after she described how she can move rain clouds (literally)with her thoughts.

This is not a book about NLP

The main gist of the book is a shaman inspired New age pseudo scientific banality of extraordinary proportion. "You are a warrior and a martyr and if you learn the way of the spiritual world, you will become a magician."
If you are in need of a fabricated and purely imaginary explanation to cope with the world, this book might be of value to you. As would be putting a hammer to your head, if I may be frank. If you want to learn something about NLP, this might be close to the worst source to consult.

I don't understand the less than stellar reviews for this book. This is NLP demystified, without the bells and whistles - it's not trance state after trance state, but real, practical tools that I'm finding incredibly useful. Many self-help books pad out 2 or 3 ideas with lots of "fluff", this by contrast has so much good stuff, I keep stopping the ipod to digest it all. It's not flashy - just really, really good.

Christiane Turner's enthusiasm is inspiring. Although the book is a long one, she definitely delivers a lot of material on NLP. It is refreshing to listen to an individual quite diverse from myself. I have not read or listened to anything on NLP for a long time so I enjoyed hearing about the "go getum" and "you can do it" NLP approach.

very proffessional yet enjoyable and easy

You just have to commit yourself to more than the first 15 minutes. This is what it takes to realize that in spite of the narrator (the author) you're kind of get used to it.
Later on you even enjoy her and thank her for having the courage to read it all by herself.
I liked the personal and clinical narratives. Each one of those carries a lesson. Even when a story sounds completely irrelevant it is followed by an "Aha, that's what it teaches me... nice..."
NLP is a great clinical tool, but there are so many myths around it. the book kind of unfoggs the matter.
Wish for some more audio NLP books. Some of the classics are really great.

As a Certified Hypnotherapist myself, I found the advice sage. This is a must for anyone who wants to start their own business and/or does not like "self-help" but instead enjoys "self-solving". She is a Universal Tour Guide.

I am really surprised at how profound this body of writing is. I really think it has changed the way I think about myself and life. It has the approach of self-love and understanding that unites us to our consciousness in a tender, powerful way. No one has a perfect upbringing, I'm sure, but this shows you, in a way, how to be the perfect loving parent and friend to yourself that creates the clear-cut path to personal healing, growth, and wholeness without ANY kind of sacrifice. Amazing. I'm amazed by this!...Also, the author's voice is just wonderful, a pleasure to listen to.

In my opinion this audio is a goldmine :-)
It might be useful if one is a little bit familiar with NLP before listening.
Have paper and pen ready, or listen to this gem many, many times. That's what I am going to do.
Thumbs up.
Lene in Denmark

If you are a high left brain, don't buy this book. If have never read any self-help books, are insecure, unstable emotionally but have a little bit of spiritual sense or if you're a somnambulist you will most likely love this book. For anyone who has read NLP, Quantum Physics or any Dale Carnegie (or the like) books, I don't recommend this book. I think the title of this book is deceptive, I read the publisher summery but obviously didn't interpret it as literally as I should have the first time, because of its Title. LOL, Other than one or two decent examples that made me pause for a second (or two) to contemplate my thoughts, it was very basic. The author uses some basic Coaching and Hypnotic type verbiage, in an attempt to play on the suggestibility of the reader. I don't mean to dis the Author, the book is just very basic (not what I was expecting). I don't think the words Quantum or NLP really should have been used in the title of this book. I haven't made it through the whole book yet so maybe it will pull itself around. I almost stopped listening to it a few times after the first 2 hrs when talking about the Dark Witch and Blondie. I think the Publishers Summery should also include a line that says

Would you be willing to try another book from Christiane Turner? Why or why not?

I would be interested in talking to the Author about herexperiences in Hypnotherapy around the idea's of subconscious reprogramming or regression techniques, and her understanding of the Hypothalamus. (Subconscious control, Environmental Hypnosis. etc.)

One example she gave in the beginning, that I have already plagiarized was with the lemon and how thinking about it causes you to salivate etc. A great example of how thoughts and feelings behind the idea's or things you say can produce results internally. Although I was aware of the fact, the example can be perfectly replicated within most people.

Do you think Quantum NLP needs a follow-up book? Why or why not?

I have an hour left to finish the book, but so far, I would change the title to Memoirs of Christiane Turner.

Greater depth in describing techniques than many NLP books. Wish this author had more books!

I enjoy all the new brain science that is coming out and I think it is very useful to us to make better use of our minds. I do find NLP to be a westernized version of Buddhist Mindfulness, complete with fantasy land attachments to money. There also comes a point in this cd, that I wonder if we are not just being encouraged into fantasy land, rather than developing our own awareness. To me, this is too far from the source and way too consumer oriented for my liking.

This book will help you figure out how to speak to the different parts of yourself without judgement. Powerful, simple, easy to follow and comforting. I loved it.