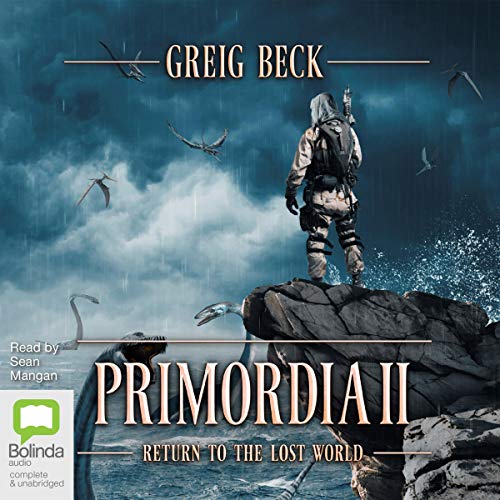 Primordia II, the stunning sequel to the blockbuster Primordia, explores a prehistoric world, travels over mountains and through swamps and strange jungles, and dives below a primordial ocean.

It was true - it was all true - and we were never meant to be there.

In December 2018, Ben Cartwright, former Special Forces soldier, and a team of naive explorers followed the clues left by his ancestor to a hidden plateau in the middle of the Amazon jungle. It was said that once every 10 years, a secret pathway was revealed to a world long since gone.

They went, and what they found was a place of wonders and of horrors. Only Ben and his childhood love, Emma, survived. But when the doorway to the hidden world closed, Ben was trapped on the wrong side.

Now, Emma has waited 10 long years for the doorway to open again. This time she’d be ready. This time she had everything she needed to go back to that hellish place and survive. All she needed was for Ben to be alive when she got there.

What listeners say about Primordia II

I thought this book was more engaging and better written than the first one.

On the whole the narration is good but there are sections in both books where the narrator sounds drunk - slurring through the story after one or two too many! it's very off-putting. I remember nearly giving up on the first book because of it.

This aside, I recommend this audio book for some enjoyable escapism.

Greg Beck does it again!

Book 2 in the amazing Lost World series, fans (like me) of book 1 will not be disappointed in this second book. Emily, a character in the first book is compelled to return to the Venezuelan Amazon rainforest, and this time she her companions are not convinced she is telling the truth about their destination. However when they arrive at Primordia their opinions change and they embark on an incredible mission.

Just a perfect primordial combination!
Would recommend these books to anyone with a slight interest in 'Jurassic Park' or 'The Lost World'.

Again not disappointed, in fact spent the afternoon listening to it as I did housework, to the extent I did not have the television on at all during the evening as I was listening to this audio instead.

brilliant story, and the narrator perfect . Informative about the past and i cared about the characters. should be a movie.

The continuation of the stories from book one had me captivated . a truly gripping novel.

Sequel better than the first!!!

Loved the story far more than the 1st book in the series. While our heroes and heroines faced as many beasts in this books, that wasn't the all-consuming prevalence. This version was more the characters maturing and having the ability to learn, grow, and succeed where younger selves failed

This is an adventurous book with friends looking out for each other, but like many or most thrillers, there's selfish coward or 2

I don't want to have to give too much away. Even if you read the 1st book and weren't very impressed. Give this one a try and get the Audible version of this if you can. It is very worth it!

Listened to Primordia 1 and 2 now. Ready tor 3.
Well written and love the description of dinosaurs and jungle.

This sequel was excellent. I liked it better than the first book. What I liked is that the characters were better developed, including descriptions of the prehistoric animals. I greatly enjoyed the long chapter on life 100 million years ago.

Well Written, But An Unnecessary Sequel Comes Next

First off, I like the story, here. What applied to my review of the first book in this trilogy applies here, as well. It’s well written, if a little run of the mill.

However, and this is a personal opinion that others may not share, it seemed to me that the story naturally ended here. To me, it had come full circle. The next novel in the series deals a lot with changes in history and time, but it’s an unnecessary sequel. My only gripe with this book is that it should’ve ended with this one. The next book just feels like a plugged in story the author needed to make it a trilogy. While these first two books are naturally connected, the concept of the third feels forced, and I confess to not reading it on account of that. Nonetheless, a good story in these first two books in the series.

great story . it was just as good as the first. I will be listening to the next

loved this book. hope there is a book 111 as i need to see what america looked like so long ago. the adventure cannot end here... was great fun. a lot of stress with the huuugge snakes and other scary ones

If you enjoyed Jurassic Park by Michael Crichton I would recommend reading Greig Beck Primordia series. When listening to this book It reminded me of one of the early childhood TV show I would watch on Saturday mornings “Land of the lost”. Both tales of what happens when people travel back in time and try to survive in a land filled with Your favorite prehistoric nightmares. Trying to find their way back home and learning how to live with dangers all around. If you enjoy those kinda scenarios this might be right up your alley!

Color me entertained. It's not a work of literary art for the ages but it's a good story with ample descriptions one can picture it in their mind's eye.

I loved this book! I liked that the author was so knowledgeable about the creatures he wrote about. It was very interesting to hear the info.
AND, I found nothing wrong with the narrator. I just hope all these negative comments aren't going to influence Sean's removal from Grieg's books. Why are people so intent on not enjoying books just so they can try to find something to complain about? Stop being so picky so you can enjoy the books.
I recommend this book. Enjoy!

I love this author. This is a wonderful series. The narrator either has a medical condition or a drinking problem, unfortunately. Some chapters are a little weird when he slurs his words. When he isn't slurring, he's a great narrator.