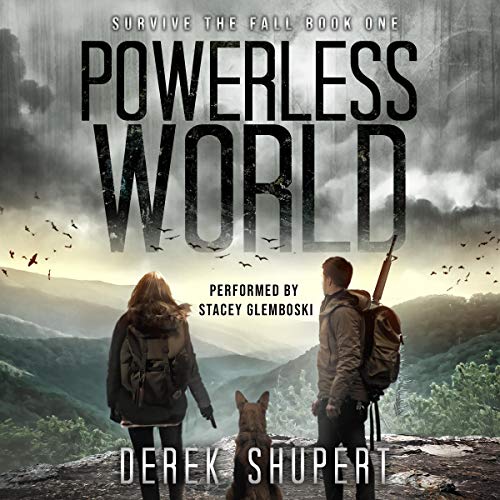 By: Derek Shupert
Narrated by: Stacey Glemboski
Try for £0.00

A single coronal mass ejection...was all it took to bring down the grid.

Will Russell survive as his plane falls from the sky?

It had been 12 months since the worst day in Russell’s life. The anniversary of his daughter’s death sent him into the bottle. He loved his wife, but they grieved in different ways. Would the pain ever stop?

She lay in bed unable to sleep. The heartache had nearly broken her, too, but Sarah didn’t want their marriage to end. If she could just get him to stop drinking. Could they learn to live again?

Russell was on a plane heading west. The engines stopped, the plane was going down, and all he could think about was Sarah. He had to see her again.

On the Boston subway, Sarah was trapped.

Fear and panic were all around her. Sarah sensed the danger. A man glared at her. With a deep breath, she wrapped her fingers around the Glock-43 in her purse. Sarah wasn’t afraid.

Will Russell and Sarah live long enough to find their way back to each other?

You’ll be on the edge of your seat with this post-apocalyptic thriller because Russell and Sarah are easy to love.

What listeners say about Powerless World: A Post-Apocalyptic Survival Thriller

I enjoyed listening to Stacey Glemboski

Heads up this book ends on a cliffhanger. This story will is a great start to a series.
The characters are strong interesting and will keep you listening.
This book has very different reviews. Give it a chance.

I enjoyed this book, it was a great start to a promising series, with plenty of action and plot twists. The characters were interesting, and strong, Russell seems to be having a very bad day, until he meets Max and Cathy. I was disappointed the book ended on a cliff hanger, and I can't wait for book 2 to find out what happens next, I really liked the narrator Stacey Glemboski, she really helped bring the characters to life. I received this book in exchange for my honest review.

I’m sorry to write this I was looking forward to this book particularly as Stacey Glemboski was narrating but I could hear her rolling her eyes!

It’s slow and annoying to listen to a “really, that’s how you would do play this situation” sorry not for me will not be getting book two.

I really wanted to like the story, but was distracted by word choices and writing style. Seems petty, but it happened repeatedly. People don't 'divert' their eyes - it's 'avert'. Eyes were diverted a lot. 🙄 And I swear the mountainous countryside was described as 'verdure' at least 5 times. A lot of time wasted on things like describing getting a cup out of the dish drainer, going to the sink, turning on the faucet.... you get the idea. And then to persevere to the end, hoping it would get better, only for the book to be totally left on a cliffhanger...?! I will not be purchasing Book 2 to see what happens next.

This is a good story you can get through in a few hours. I listen to this genre all the time and it still felt fresh and like something I had not heard before. The narrator was very good. It bounces between the two characters in a way that doesn't feel jolting. I would recommend this to anyone who likes this genre.

Good first book in this new series! I like both of two main characters and enjoyed their two different paths - hopefully back to each other. I recommend this apocalypse story.

Thrilling and I want more!

This has a different take on a power grid going down. In here we meet Russell and Sarah who are on the brink of divorce. They are separated and in different places when the power goes down. It’s interesting to see who of the two are stronger and more competent in how they move forward. I was surprised more than once at the actions of these two.

This is a exciting story. Since it’s unfinished I assume there will be more adventures for these two. I did listen to this on audio. This is my first listen with this narrator. She did a good job.

I was just starting chapter 2 when I knew that this was a book that needed to be returned. Too many publishing companies are churning out this genre with no regard to produce a quality product just the intent to possibly garner a few bucks. Just because a spellcheck was done does not imply that they author is knowledgeable about the topic.