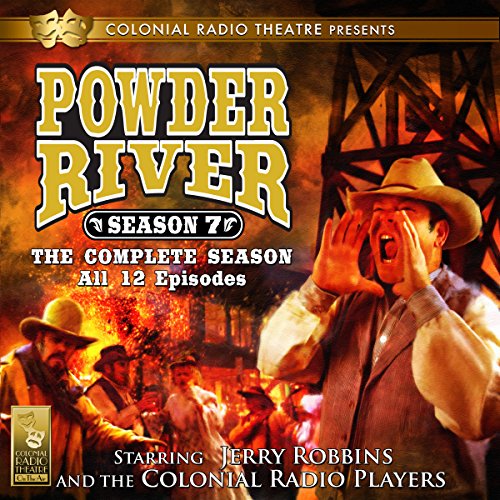 The award-winning Colonial Radio Theatre's long running western series Powder River opens its seventh season with the three-part episode, "The Cattle on a Thousand Hills". Britt, Dawes, Doc, Matt, and Brad begin the cattle drive from Oklahoma to Clearmont, with the rustlers waiting for the right time to strike. In the two-part episode "The Wild West Show", Britt meets William (Buffalo Bill) Cody, an old friend who has just begun touring his Wild West Show. In "Pennies on a Dead Man's Eyes", Britt finds a dying stranger on the trail and brings him to Clearmont. Unable to speak and with no one knowing who he is, we live the stranger's entire life as it flickers before his eyes in his final moments. And in the two-part episode "The Fire", a careless act brings disaster to Clearmont in the Season 7 finale.

All 12 episodes from the seventh season are included: