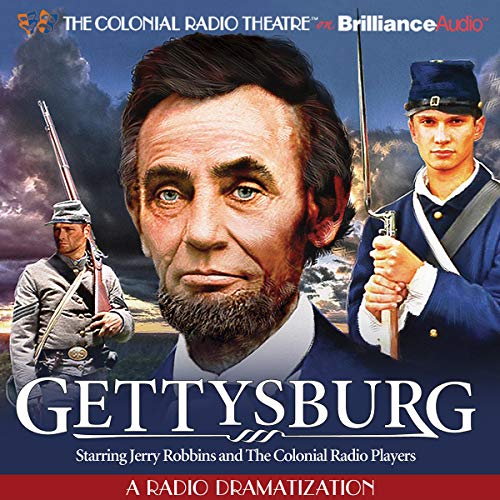 Highly detailed and accurate, you will find yourself in the middle of General Buford's skirmish line as he tries to halt the Confederate advance into Gettysburg. You will feel the anguish and hell of war - of the slaughter that took place in the wheat field. You will live the heroism of Picket’s doomed charge and hear the immortal words that President Lincoln delivered in his consecrating address some four months later. No matter your loyalties, Gettysburg will have your heart pounding with its thunderous action, high adventure, and suspense.

“Here are the fatigue, the despair, the pain, the screams, the deafening cannon plowing through human ranks, death, and dismemberment. Sometimes the politicians are heard, more often the generals and officers and foot soldiers. One would swear that a newspaper reporter with cassette recorder in hand was dashing around the battlefield in the thick of it.” ( AudioFile)

What listeners say about Gettysburg: A Radio Dramatization

Very good for the short version

I am a bit of a civil war expert. In other words I have done a lot of reading about the war and especially the battle of Gettysburg. I enjoyed this dramatization very much and if all the facts were correct I learned at least one quite interesting thing. I am not going to give it away here. I do have one large complaint. No mention of Jeb Stuart or George Custer. During Pickett’s charge Jeb was supposed to meet Pickett at the spot in the Union line Pickett was aiming at and at that time divide and conquer.

General Lee spoke about this very little, but does reference it at least a couple times. So his real plan was quite solid and the main reason it didn’t work is George Armstrong Custer and his men. Their losses were heavy. I would love to have heard that part of the battle included in this production.

Could have been better without the cursing...

What did you love best about Gettysburg: A Radio Dramatization?

It could have been the best audiobook for 6th - 8th grade but it was spoiled with too much cursing for a homeschool library. You expect there to be violence but not the foul language. The radio drama was amazing and accurate otherwise! Grant it there were no f-bombs but plenty of Damn, Hell, or G-d....sad I must return it. I hope the whole series is not like this :( It seems to be made for young listeners but then...ok...this horse is dead!

What other book might you compare Gettysburg: A Radio Dramatization to and why?

I thought it would be very much like the series by Jerry Robbins called Powder River and it could have been. THAT was a western with shoot-em-up stuff and still it did not have all the cursing.

It would be great if AUDIBLE.COM offered a rating system for parents and teachers like the movie and TV industry has. That way we could make informed choices based on CONTENT.

Noisy, Confusing, and Not Much Dialog

With so much great material to work with, this falls rather flat. Although a very clever idea the performance proved sloppy, used too much filler background noise, and was quite confusing. The dialog (Script) was sparse and did not paint a very good picture of the battle. With a few exceptions, the characters were not relatable or identifiable. Trying too much made for less and rushing the production made for poor performance. Producers and cast would have greatly benefited from studying Micheal Shaara's Killer Angels. From there they could have produced both a good and unique work.

A very good dramatized telling of the battle of Gettysburg. It was given in a new perspective through the radio format.

Educational and entertaining. We listened on our drive to visit Gettysburg. Was a worthwhile investment and made the battlefield come to life.

i enjoyed the sort of first person look at history. well worth a listen. recommend

I could not stop listening. As a civil war buff, this was fantastic ! Thank you for this great work!! L

So many voices, one battle!

Would you listen to Gettysburg: A Radio Dramatization again? Why?

I knew little of the battle and I wanted a radio show that would fill in the gaps of my knowledge. This way I could reinforce what I already know and research my weak areas. I'd read the other reviews and the CRT production is accurate.

What was one of the most memorable moments of Gettysburg: A Radio Dramatization?

Pickett's charge. No question. President Lincoln's thoughts, not just about the battle, but about the men in the battle.

Have you listened to any of Jerry Robbins and The Colonial Radio Players ’s other performances before? How does this one compare?

I have listened to the Jarrem Lee Ghost Hunter series (pure fun) the outstanding production of Ticonderoga, and both Bradbury offerings, Dandelion Wine and Something Wicked this way comes. The latter equal Gettysburg in everything. And the previous reviewer was correct. This 3 hour radio show is accurate to the battle. I'm happy to have taken the time to listen to an hour each night from July 1-3, 150 years after the fight.

There has been many tag lines from many movies made about this battle, but I think the best tag line from this CRT production is "I'll remember." I didn't see this coming and I'm sure Jerry Robbins and the CRT gang knew when it was written it would have to be delivered a certain way and by a certain person. Well done Yankees. For me specifically this line brought it all together. Once upon a time I used to be a soldier.

I hope CRT and Jerry keep bringing these productions to life, despite all the hard work. Now, I'm going to pick out another production!

Didn’t you know ?
That’s the way it was then bro
There are no fights there are no chicks
Wait till it Makes Netflix