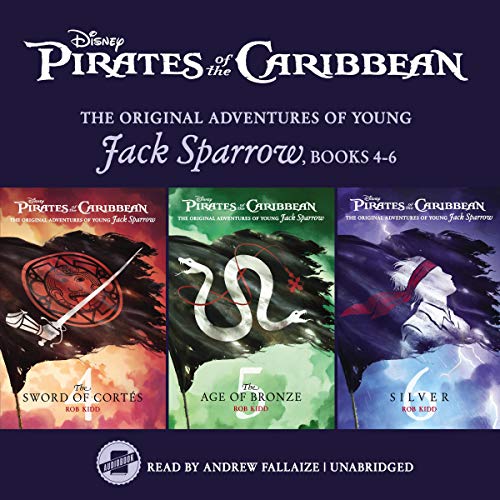 Before the Black Pearl, there was a teenage stowaway named Jack Sparrow....

Audiobook four: The Sword of Cortes

He has the enchanted sheath. He's read the mystical incantation. He's holding the all-powerful Sword of Cortes in his hands. But unfortunately for Jack Sparrow, he also has the specter of the sword's first master - Hernan Cortes - watching over his shoulder. Now, stranded on a snowy Caribbean island, the fate of the Barnacle's crew hangs in the balance. Jack must find a way to command the unwieldy power of the sword, defeat Cortes, and save his mates. But as usual, it won't be easy.

Audiobook five: The Age of Bronze

With their recent quest for the legendary Sword of Cortes complete, Jack and his crew take a break in their mate Tumen's village on the Yucatan peninsula. But when a charmed amulet goes missing, Jack and the crew become prime suspects. Can the crew clear their good names and conquer the dangerous duo who they believe to be the real thieves? And what exactly is the mystical power that the amulet holds? Jack and the crew of the Barnacle are about to find out.

Jack's first mate, Arabella Smith, has just made a startling discovery. Her mother, who she thought long-dead, is alive and well - and living a pirate's life! Laura Smith is the captain of the powerful Fleur de la Mort. And she has some very powerful crewmates sailing with her, including the much-feared buccaneer Left-Foot Louis. When Jack and his crew are forcibly brought aboard the terrible Fleur, they quickly learn that there might not be an easy way off!

What listeners say about Pirates of the Caribbean: Jack Sparrow, Books 4-6