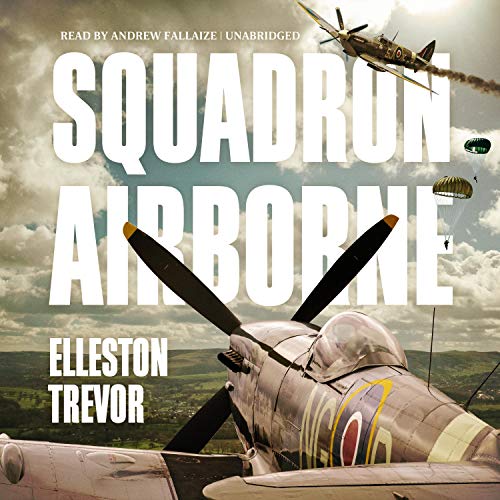 By: Elleston Trevor
Narrated by: Andrew Fallaize
Try for £0.00

Peter Stuyckes is a 19-year-old who has just finished his training as a pilot for England’s Royal Air Force (RAF) when he arrives at an aerodrome called Westhill near the town of Melford, England. There he joins an established squadron already in the thick of the fighting but with a less-than-stunning first flight in front of his new colleagues. Stuyckes doesn’t know it then, but he is to become part of what will be called the Battle of Britain, the first major military campaign fought entirely by air forces.

In the midst of casualties and survivors, battle fatigue and botched landings, parachute escapes and pilots shot down during aerial battles, members of the ground crew hasten to repair the Spitfire planes that make it back, proudly tallying their pilots’ strikes. It all takes place along with romantic encounters in between, until the squadron prepares to leave for rest and refit at Lincolnshire, after which a new squadron will take their place.

Elleston Trevor, who was himself a member of the RAF, takes the listener into the action of one week during the Battle of Britain in this tense, exciting, and realistic story.

What listeners say about Squadron Airborne

Picked up on the off chance as part of the new Audible Plus service this proved to be one of the best books I have heard. Written by a very successful author of the 50s-70s who now seems largely forgotten (this is his only book on Audible) who served in the RAF as groundcrew in the war, it portrays a single week for an airfield in Kent in September 1940.

And it is an emotional rollercoaster of a story, covering the lives of the pilots and groundcrew in a stunningly truthful and realistic way that makes you feel like you are there.

A well written story that brought to life the battle of Britain and how it played on the lives of all involved.

Great story, very easy to listen to. It will keep you gripped and wanting more!

10% of the narration is Diabolical!!

This is a GREAT story ..... i first read it decades ago and can still remember parts of it . Most of Andrew Fallaize ,s narration is fine but his characters voices are DIRE! ,cring making . The ground crews voices are made to sound like adenoidal morons and the officers are given a mouth full of marbles to chew on . Do yourself a big favour and read this story in a book , i will struggle on with this Audio book because the story is so good ,but i will not listen to this version again .

a great story that takes you there, the emotional journey is a shared one between listening and the main character narration is good and you dont really hear the voice just the words, paragraphs, chapters
well worth a listen

least we forget ,the ultimate human sacrifice so painfully given. Glad I was reminded.

An authentic and touching story

The story has the ring of authenticity that you'll perhaps only get from an author who experienced the time and the conflict of The Battle of Britain first hand. A real gem.

Great story, let down by the performance.

This is a great story, however it is let down by the narrator, who, whilst trying hard, only seems to make it worse. The vocal characterisations are cringeworthy, and the overall performance lacks the gravitas that the subject demands.

This should really have been narrated by someone like David Rintoul who possesses the required range of characters and who's voice brings the necessary depth to the subject.

The accents and character voices by the narrator are abysmal; just kill the story . Leaden