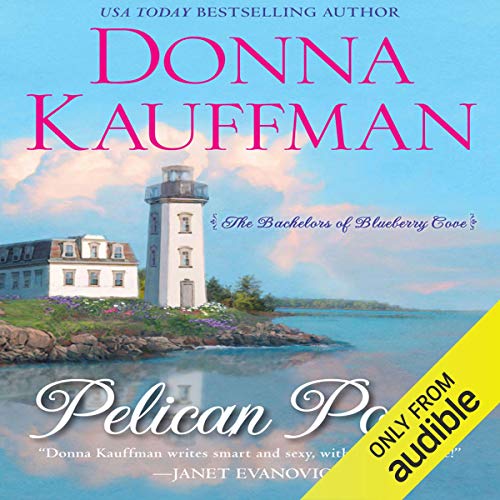 Blueberry Cove, Maine, is as small-town as small towns get. More than a little quirky, it has sheltered generations of families. But there's always room for a new face.

Fixing things has always been Alex McFarland's greatest gift and keenest pleasure. But with her own life thoroughly broken, she's signed on to renovate the dilapidated Pelican Point lighthouse, hoping to reconnect with herself. The last thing she expects is to find herself falling in love - with the glorious coastline, with age-old secrets and welcome-home smiles - and with rugged Logan McCrae, the man she just might be able to build new hopes on. DIY is so much better with two.

I really didn't get through the whole thing! Just "meh..." I fell asleep about ten minutes in, must get an award for most repeat listens!

I Expected Too Much of Pelican Point....


Pelican Point seemed like an exciting book for me to listen to, as it takes place on the rural coast of Maine – a place I know very well.

The beginning was strong, but after that it just seem to muddle along. It wasn't bad, but it wasn't 'blow me away.' It was too descriptive and detailed. Everything was repeated, from the condition of the lighthouse to the trees, the water, the land, etc.

I won this book in a contest but have not been able to finish it (I'm about halfway through) and putting it aside for now. I will not pursue this series nor would I recommend it as anything but average.

I have mad respect for authors, as it takes courage and self-discipline to write and put your product out to the public. So, Donna Kaufman, I appreciate your effort. This book just didn't do it for me.

The narration was good to better.

Notes: some descriptions of sex - PG

Couldn't get past the first couple chapters

The author spent a whole chapter with the heroine in a fog, taking in the hero's extraordinary great looks and about 5 minutes on his deep baritone voice. When the hero spoke tho, he sounded like a teenage cartoon character. I realize it's hard for women to do men's voices but I think my biggest criticism is that it was all just too boring to listen to. People who love, love, romance novels would probably like this book but for me there was too much of the heroine being fainting and delicate and swooning over the hero's good looks. I just couldn't get past the first 4 chapters and had to return the book.

Has Pelican Point turned you off from other books in this genre?

Maybe I should have read through the reviews more thoroughly. I would still check out other books in this genre.

The hero's voice sounded like a teen cartoon character.

I think I would’ve enjoyed this more with Amanda Ronconi or a different narrator. It is difficult for a female narrator to do a deep baritone voice but I also found some of the accents that I think were supposed to be from Maine? But we’re more like from Brooklyn, to be very distracting. I really want to listen to the rest of the series and then the next one but I’m not sure I can do another two books of the narrator :-( too bad because I was starting to like blueberry Cove.

The story would probably not be this slow as a paper back but the combination of the story, with the sad story details being repeated over and over again, together with the narrator’s voice (which is not really bad but low and slow), it makes me sleepy and after some time I notice that I have thought about something else and missed the last ten minutes. I have tried to listen to this book a few times now but always end up listening to another book. I will not finish this one.

This book is up there with Virgin River and Angels Rest for me. I love this story and the elements with the lighthouse, past losses, the romance, etc. Loved it.

Pelican Point by Donna Kauffman is a 2013 Kensington publication.

Alex is still deeply mourning the loss of her father and coping with legal issues involving her business. With no one left in her life, she readily agrees to pack up and head to Blueberry Cove, Maine, where she has taken on the giant task of refurbishing a dilapidated lighthouse. But, once she arrives, she has a fainting spell, which puts her ability to handle the job in question. However, her biggest obstacle is the local town sheriff, Logan McRae.

Logan inherited the Pelican Point lighthouse, which also came with some land and buildings, including the house he lives in. The trust money hasn’t been invested properly and so if he does put money into a restoration, his living quarters will get top priority. However, his meddling grandfather hired Alex without telling him. Now Logan has the unpleasant task of firing her, which he wastes no time in doing.

But before Alex can get leave town, Logan is cornered into allowing her to stay and at least put together an estimate for him. He’s not overjoyed about those developments, but allows Alex one week to get the job done. This gives Alex a narrow window of opportunity to prove to Logan she is up for the job, but she is determined to pull it off. However, it also makes time for the sizzling chemistry between the couple to flare into a full -blown flame!

I’ve read novels by Donna Kauffman over the years, but until just recently, I had lost track of her. After reading one of her latest releases, I wondered if I might have any of her other books lurking around on my Kindle. I had two of her books on my device, as it turns out, but since this was a ‘first in a series’ novel I picked it first.

I love lighthouses. They are so fascinating. A Simple concept in some ways, but what they represent is part of what makes them so special. So, of course, this book already had a plus mark in one column before I even started reading it. However, the story, which is built-up around the lighthouse restoration, checked all the other boxes in the plus column, as well.

The dialogue in this one is especially crisp. Alex and Logan exchange some lightening fast banter, some with a lot of sexual heat and some with a lot of emotional push and pull. The secondary characters were a hoot, and Logan really had his work cut out for him, once Alex barged into his life. Watching him squirm was highly entertaining.

The small -town atmosphere was delightful and charming, if a bit quirky. There are some poignant moments and emotional situations, due to the painful pasts both Alex and Logan need to make peace with. But, those moments are offset by plenty of humorous situations, some which make me chuckle.

I thoroughly enjoyed this first installment in the ‘Bachelors of Blueberry Cove’ series. I think I will hunt down the other installments in the series and work my way through them in the coming year.

I’m so glad I re-discovered this author and am looking forward to reading through her older titles and hope to see another new release coming in the near future.

The audio version of this book is very well done. I read parts of this book on my KIndle and listened to parts of it via the Amazon Alexa device. The narrator did a very good job with this book. The diction was clear, and the character voices were excellent. Logan's voice was a llittle low, and I occasionally had to strain to hear his dialogue, but other than that, this was a very pleasant listening experience.

It was aLittle boring

Don't take no for an answer

What did you love best about Pelican Point?

I admire lighthouses, so anyone who restores them would be of interest to me.

Alex, as she is plucky.

Which character – as performed by Lauren Fortgang – was your favorite?

Old homes can be new homes.

What made the experience of listening to Pelican Point the most enjoyable?

The narrator is excellent bringing each character into his/her own! It's an easy read/listen.

The main characters Logan and Alix but certainly the towns people all highlight this beautiful story.

What does Lauren Fortgang bring to the story that you wouldn’t experience if you just read the book?

Life of each character was superb!! Felt like I was right there.

No but it took no time to finish.

I enjoyed the whole Lighthouse restoration story and what will happen. I enjoyed the characters immensely but I could have lived without all the sexual parts..I felt that was a bit overwhelming and not needed as it had a great story line.