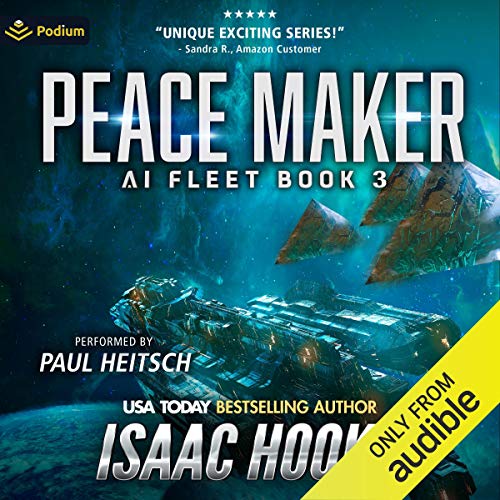 By: Isaac Hooke
Narrated by: Paul Heitsch
Try for £0.00

Jain, a former SEAL whose mind is now the AI core of an advanced alien warship, has agreed to broker peace between humanity and the extraterrestrial race known as the Mimics.

Unfortunately, a new breed of alien has decided to crash the party. These newcomers, part of the hostile Link empire, aren't very happy humanity is trying to coax a former member species into signing a treaty.

Jain and the Void Warriors have to fight off this new threat while struggling to salvage the smoldering ruins of the peace talks. Things certainly don't look good, not just for themselves, but humanity: If they can't secure allies against the Link, Earth will eventually be crushed.

Some days, having your mind stored in the AI core of a starship just isn't all it's cracked up to be.

Includes a special bonus note from the author.

What listeners say about Peace Maker

This wasnt my favorite of the three but still a good. will be following the author.

Quite a good series

Quite a good end(?) to a fabulous series! All the books in this series are well thought out, with great plot twists & well written battle scenes and interplay.

Great listen but you have to pay attention. There are a lot of players, most trying to end humanity or enslave it. why do they hate humans so much? Maybe it's our constant bickering and Waring, we are never satisfied with what we have. so, humans that become AIs then starships with backups. you die, you install backup, life eternal, but it's not the same. death is death and war is constant. man I need a cigarette, virtual sex anyone? How does that work? oh you have a robot body that works like a human body. Then what, a virtual pregnancy? weird but interesting. Lobsters, termites oh my,, oh my! Follow the glowing starship!

I really enjoyed the plot and the plot twist. the day-to-day life this group lives very well written and fantastically performed by Paul heitsch. I certainly hope to hear more books in this universe.