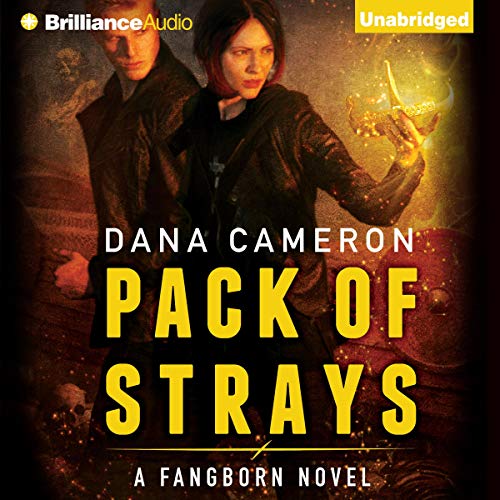 The second exciting novel in the Fangborn series.

Archaeologist Zoe Miller has only recently learned she is Fangborn, a secretive race of werewolves, vampires, and oracles dedicated to protecting humanity. But after she discovered and opened Pandora’s Box, the fabled item has lived up to its myth, and for Zoe and her friends, all hell has broken loose. Now she’s on a double mission: to prevent a politician from revealing the existence of the Fangborn and to foil the diabolical plans of the powerful Order of Nicomedia, a group dedicated to eradicating her kind.

But Zoe is also noticing disturbing changes in herself - new and unique abilities. Her visions are intensifying too, drawing her to faraway places to find more artifacts like the bejeweled bracelet embedded in her wrist.

In a world of dizzying shifts, who can Zoe trust? For while her former lover wants to turn her in, her former adversary seems dedicated to helping her mission succeed….

The second novel in Dana Cameron’s Fangborn series, Pack of Strays takes the fast-paced adventure of Seven Kinds of Hell to a whole new level!

What listeners say about Pack of Strays

This quickly became one of my favorite stories and this second book was even better than the first. Very well researched with great characters and story line make this a book that I couldn't put down until finished. I wish it was more than just a trilogy because I could read on and on. The narrator was perfect for the story doing an awesome job with different characters male and female alike. I will be searching for more of her work. Highly recommended.

CAMERONS BOOKS ARE AN EMBARRASSMENT TO ALL AUTHORS

This one is as stupid and tactically unlikely as the first book in this series. This author needs to learn about real life, hazardous situations and how normal people react when life and limb is on the line. Everything this main character does fails in the face of logic. This series is a waste of time. Glad i did not have to purchase it.
One thing, the narrator is very good!

Kate Rudd did well with this story . I personally would like to see a little less emotion in her portrayal of the central character Zoey.
Dana Cameron once again wrote an interesting and intriguing tale that fits well with the first two.
Yes it is a keeper, so I will be purchasing the next two books in the series and the Audibles with them.

This one isn't as good as the first but it's OK. I'm on to the next book.

If I could, I'd give the story 3.5 stars. The book is very busy, which is good, but there's almost too many characters to remember. I also didn't like how the book ended on a cliffhanger. The main character finds herself drawn to ancient fangborn artifacts all over the world while simultaneously running from evil, dodging her own people, and battling protectors. The narrator's voice tends to give the main character a whiney, irritating, and grating persona.

I enjoyed it enough to look for book three...but

I wouldn't rave about it...but if someone asked me about it I would say it was ok

I just don't feel super attached to any of the characters.

She did pretty good with all of the characters.

I liked it enough to look for book three, but I don't know if I will remember it by the time book three comes out. More than likely a year or two from now, I will be waiting for books from my favorite authors, desperately searching for something and find the book and not remember that I read it.

What did you love best about Pack of Strays?

Would you recommend Pack of Strays to your friends? Why or why not?

my friends would not like it. they would become bored and not finish. I can't even remember what happened in the end of this story! :(

Have you listened to any of Kate Rudd’s other performances before? How does this one compare?

yes, I really enjoyed her other performances and found this one was no different.