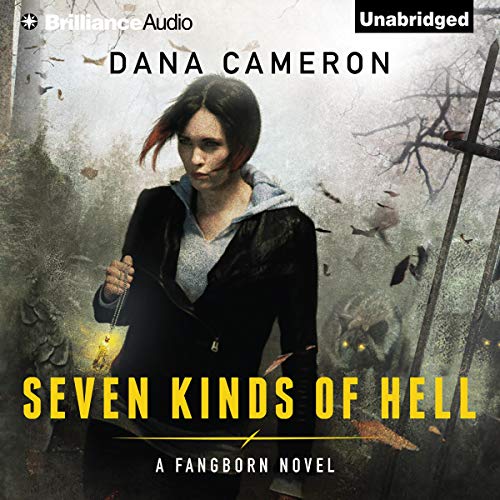 When archaeologist Zoe Miller’s cousin is abducted by a vicious Russian kidnapper, she must come to grips with a haunting secret. Unknown to even her closest friends, Zoe is not entirely human. She is a werewolf and a daughter of the "Fangborn", a hidden race of werewolves, vampires, and oracles.

Zoe’s attempt to rescue her cousin leads her on a quest for artifacts - including Pandora’s Box, an object of world-ending power. With the fate of humanity in the balance, Zoe will be forced to renew family ties and pit her own supernatural abilities against a dark and nefarious foe.

At once captivating, deftly worded, and character-rich, Seven Kinds of Hell expands vampire legend and werewolf noir in both intensity and charismatic bite.

" Seven Kinds of Hell is a great adventure. Dana Cameron’s supernatural heroes are refreshingly different, and the action is astonishing." ( New York Times best-selling author Charlaine Harris)
"Dana Cameron can pull me into a story like few other writers. Wildly creative, thrilling, and fun, the Fangborn series is one you won’t want to miss!" ( New York Times best-selling author Tess Gerritsen)

What listeners say about Seven Kinds of Hell

This story is a bit slow, and has whole sections where you find yourself zoning out for a while. I also didn't like the narrator. Her voice is annoying and her British accents are dreadful. Don't think I'll bother with any of the other books in this series.

Where does Seven Kinds of Hell rank among all the audiobooks you’ve listened to so far?

As an story, this is not a bad tale. It's a little bit like a book aimed at teenagers but throw in some swearing and say it's for adults. The storyline is good and sets the scene for subsequent books and I'll probably have a listen to them as there is enough of a hook to make me want to find out what happens next.

What other book might you compare Seven Kinds of Hell to, and why?

I can't think of a specific book to compare this to, but it's an interesting take on the Werewolf / Vampire (and now Oracle) genre. Think Underworld without quite as much violence and throw in a bit of shooting around Europe.

Would you listen to another book narrated by Kate Rudd?

Now this is the sticking point with this Audiobook. It's like listening to a Text-To-Speech program. Kate's voice has a very distinctive choppy style where she seems to think that every syllable of every word MUST be pronounced, which makes it very unnatural. And as another reviewer has commented the word is "SHARD" with an "A" not "SHIRD", along with other plainly wrong pronunciations. You can excuse the French train stations, but not simple English words.

The story does keep you wanting to listen, (despite the pronunciation), so I guess as a reaction the story made me feel excited to find out what happens next.

Great narrator and very good story, looking forward to the second one. The story moves along and a high pace keeping the listener glued to the story.

I loved this book like all the others . even with a new narrator !

I read a lot of paranormal fantasy (well, I read a lot of scifi of all types) and I had a hard time getting "into" this story. This is the first in a new series by a young author, and is reasonably well written. However, the characters are a bit immature. The book is not YA, per se, but the characters are in their 20's, fresh out of grad school and all seem rather puerile, both in their reactions and dialogue. The protagonist, Zoe, is also a bit too 'whiny" in much of the novel for my tastes ("oh, Will can't find out about my beast side...)

This book does have a lot of good action scenes and globetrotting, which makes it worth the member's list price. The addition of archeological history (the protagonist is a professional archaeologist) is a positive addition for me as well as the world-building aspect of the "fangborn" (those of beastly, vampiric or oracular bent.) I will more than likely check out the 2nd volume in this series to see where Cameron takes her world building and in hopes for some better character development and a thicker plot.

The narrator does a fair job with the male and female characters.

I'm a huge fan of the Dresden Files and the Iron Druid Chronicles and enjoyed this just as well. Looking forward to the rest of the series.

I purchased this book during a recent sale of books first in a series. I am a big fan of the supernatural genre and I really enjoy a good series so I usually purchase a few sale books each year to see if there are any that I have been missing. The reviews of this book weren't great but it had an interesting story line so I decided to go for it.

Unfortunately, what really ruined this book for me was the reader. She has an odd way of annunciating her words, sort of clipped like she's almost swallowing them, and she was over the top on the drama. I might of liked the main character better if the reader hadn't made her sound so whiney.

That being said, the book wasn't great either. It started out slowly and just never really got off the ground. The action scenes were predictable, none of the characters are very likeable, the supernatural world is way over the top, and the ending was really a lead in to the next book. On the plus side it wasn't heavy on sex and the main character did seem to grow as the book progressed.

If you are a fan of the supernatural genre with action I would highly recommend the Monster Hunter International or Iron Druid series. Both have excellent readers and are fun, exciting, and entertaining. If you are into the supernatural strong heroine type of series try out the Jane Yellowrock series.

Enjoyable start to a new series.

If you could sum up Seven Kinds of Hell in three words, what would they be?

I enjoyed this novel. Zoe Miller is a likable protagonist. The story is fun, light and well done. I loved Cameron's colonial noir short stories and the Emma Fielding series. Paranormal is not my favorite genre but Cameron pulls this off and I liked the archaeology theme.

No. The pathos in her voice should have been dialed down.

This was a very good urban fantasy series introduction. The world building is interesting and well developed, the plot was well crafted and filled with action, and the heroine is smart and likeable, even if she has impulse issues.

I loved that the author pulled her expertise in archeology into the book. It made the setting all the more rich for it, and unlike some UF, did not feel at all dumbed down. I found myself just as interested in the mysteries of the artifacts as I was in the intrigue concerning Zoe and her gang of misfits. The plot was very well-paced with plenty of adventure balanced by meaningful interactions between the characters.

I am looking forward to the next installment.

What would have made Seven Kinds of Hell better?

Would you ever listen to anything by Dana Cameron again?

Probably not. Her idea was a good one, but her execution left much to be desired.

The voice she chose for the main character was annoying and at times painful. It was like watching a car crash. You want to look away, but you can't.

The idea of the story was great.

Just when I thought I would be able to overlook the poor narration the storyline became unbelievable. I Ike stories with strong female characters, but this books main character just seemed needy.

This is a clean YA book. No Spice whatsoever here. It was offered as a read and listen free option which I'm glad, because I like my books with spice. It was an okay story and Kate Rudd made it enjoyable for me to want to continue with the series.

The storyline was entertaining but I felt this was told by many other authors. It has the action of Lara Croft in The Tomb Raider and the Story line of the Templar. I was hoping for originality but it fell short. I listened to this narrator before but this time around, she was annoying. I finished the book but I do not see reading another.

I really enjoyed this book with all the histories, historical places, and each character. A story about vampires and shapeshifters in a laura craft kind of world. I started and couldn't put it down. The narrator did a great job with the different characters and was perfect for this story. I'm really looking forward to the next one to see where it goes. Highly recommended.

This author is so weak and out of touch with common sense that i am embarrassed to be listening to this travesty. Every situation, action and reaction made by the main character goes in the opposite course of what a normal, real life person would make if they were in the same situation. When the author makes the MC say, "I cant follow my emotions. I have to stay sharp!" then she is crying, self berating, indecisive, and running away from an ex boyfriend because she scared out of her mind?! How does this ignorant author believe that these actions are logical and made by a clear, and thoughtful mind?
There are so many instances of this contradictory crap that it should be a crime.