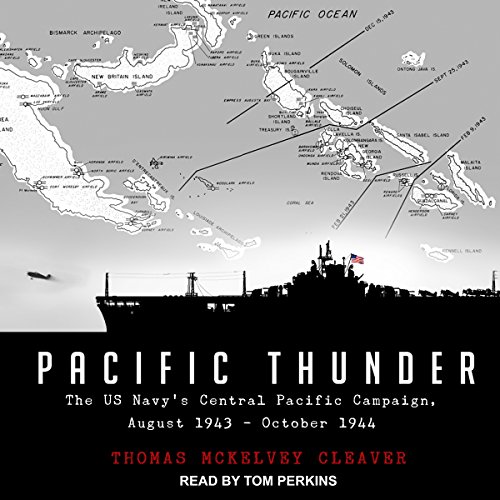 By: Thomas McKelvey Cleaver
Narrated by: Tom Perkins
Try for £0.00

On 27 October 1942, four "Long Lance" torpedoes fired by the Japanese destroyers Makigumo and Akigumo exploded in the hull of the aircraft carrier USS Hornet (CV-8). Minutes later, the ship that had launched the Doolitte Raid six months earlier slipped beneath the waves of the Coral Sea 100 miles northeast of the island of Guadalcanal and just north of the Santa Cruz Islands, taking with her 140 of her sailors. With the loss of Hornet, the United States Navy now had one aircraft carrier left in the South Pacific, USS Enterprise (CV-6), herself badly damaged in the two previous days of the Battle of Santa Cruz.

For the American naval aviators, it would be difficult to imagine that within 24 months of this event, Zuikaku, the last survivor of the Imperial Japanese Navy aircraft carriers that had attacked Pearl Harbor, would lie at the bottom of the Philippine Sea north of Cape Engano on the island of Luzon, alongside the other surviving Japanese carriers, sacrificed as lures in a failed attempt to block the American invasion of the Philippines, and that the United States Navy's Task Force 38, composed of 16 fleet carriers, would reign supreme on the world's largest ocean.

What listeners say about Pacific Thunder

My only minor criticism is I like my history books to be linear and not skip back and forth in time. As an example, when an aircraft or personality is mentioned, he tends to go over that persons or objects history in great detail.

Good for what it is, but not what it claims to be

From the title and description I expected a more of less comprehensive history of the Central Pacific campaign. In particular I expected at least an attempt to explain the planning and strategy of the campaign. Instead Cleaver is laser focused on the experiences of the air groups and the individual air crew. He has dug up a lot of good detail on the lives and missions of carrier aviators and those stories are informative and interesting. He does a decent job on the equipment, especially the Hellcat and Helldiver. Less so on the Avenger. The book also starts off strongly with a review of the development of American carriers and carrier doctrine in the pre-war period. It even does a good job of sketching even the events of the early war, setting the stage for August 1943

Unfortunately when the narrative reaches the start of the titular campaign the book's focus shifts to the micro level. Missions are described, the stories of individual pilots and air crew are told. Occasionally we get some strategic explanation, but never an over all clear picture.

Still glad I read it, with a title and description that match the content of the book I would rate it highly, just not the book it claims to be.

Tom Perkins does a fine job with the material and keeps the narrative moving forward. He does what most of the better narrators do, reads it well enough that you can enjoy the book and not think much about the narration.

loved it, enough detail to satisfy the historian in me, with new insights and observations

Of the 50+ books I’ve read on WWll Pacific, this was one of if not the best.

In all fairness, I arrived at listening to this book after listening to the excellent Jeffrey Cox book "Morning Star, Midnight Sun", so I was hoping for continuity in the progression of the Pacific campaign. "Pacific Thunder" is perhaps not the appropriate name for this book, as it is written in a very detached, almost disjointed style. The author goes from exposition to biography to narrative recount within the chapters making it somewhat difficult to identify where action took place. In addition, the timeline is not linear as would be expected by the sub-title. This makes for a bit of a jumbled listen.

This book provides an extremely detailed account of the US military recovery and massive growth after Guadalcanal and its successes and failures. The author writes about the major high level plans and the senior admirals and generals of both sides, US and Japan, that made them. He also provides careful detail of the men on the line who carried the plans out.
This is history with real war time strategy and tactics, with a window into the men, machines, and materials that fueled and fought the war.
This book is one of the best accounts of the war in the Central Pacific that I have ever read.

Details not a problem for me

Some have denigrated this writer’s penchant for using official US Navy nomenclature and numbering as part of the story. I didn’t find it to be a problem after I got used to the habit.

I have been reading about the Pacific war on and off since my grade school days in the early ‘60s and found this accounting to be a good overview of how things spooled out. I appreciated the first hand accounts that make up the majority of the story line. I plan to carry on by also listening to Tidal Wave, where the author picks up the story where Thunder leaves off and carries it on to the Japanese surrender.

Good listening but to technical when it came to participating ships and their hull numbers.

What made the experience of listening to Pacific Thunder the most enjoyable?

The narrator did a solid job with the story. The personal stories and accounts were excellent.

The story is great with first hand accounts and personalizing the war. It does this at the cost of an overall strategic context and story arc. If the author had gone from macro to micro to macro again it would have synced up the stories more succinctly for me. This would have required a longer book though which I would have enjoyed. Great book overall and recommend if you like the individual accounts of naval combat but would not recommend if you want a strategic analysis of the Pacific campaign.