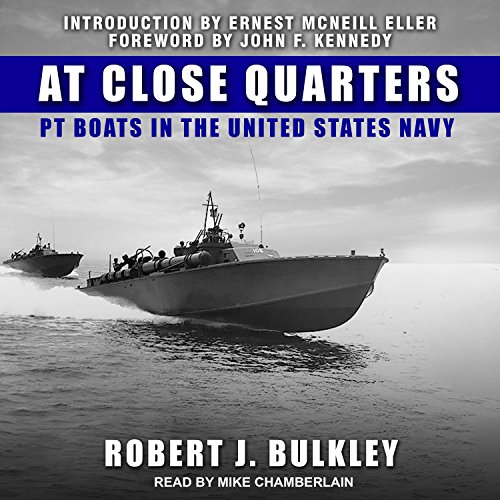 Small though they were, PT boats played a key role in World War II, carrying out an astonishing variety of missions where fast, versatile, and strongly armed vessels were needed. Called "weapons of opportunity", they met the enemy at closer quarters and with greater frequency than any other type of surface craft. Among the most famous PT commanders was John F. Kennedy, whose courageous actions in the Pacific are now well known to the American public. The author of the book, another distinguished PT boat commander in the Pacific, compiled this history of PT-boat operations in World War II for the US Navy shortly after V-J Day, when memories were fresh and records easily assessable.

Bulkley provides a wealth of facts about these motor torpedo boats, whose vast range of operation covered two oceans as well as the Mediterranean and the English Channel. Although their primary mission was to attack surface ships and craft close to shore, they were also used effectively to lay mines and smoke screens, to rescue downed aviators, and to carry out intelligence and raider operations. The author gives special attention to the crews, paying well-deserved tribute to their heroism, skill, and sacrifice that helped to win the war.

What listeners say about At Close Quarters

Dry as the dessert in July!

This is tied for the worst book I've purchased in all the time I've been with Audible (10+ years). The overview sounded very good but when you get into it, the book is basically a compilation of log books and patrol reports. This might not have been so bad but the narrator's style is the last nail in the coffin. He speaks with a monotone and very poor pacing. To add insult to injury, he mispronounces several words consistently. I was determined to get through it but just couldn't take it any more and bailed out at chapter 20.

A grand effort but no C-gar...

Being from Alaska I was very interested to learn that the Navy actually tried PT's out on Aleutian waters.
It's no spoiler if I say "WHY didn't you ask someone who actually LIVES there".
Could have told them they'd crash and burn;(
No, what sinks this book (pun intended) was very simple. You will hear the frais "John Doe USNR"
something like 400+ (way plus) times. You think I'm joking, rent the book and start counting.. There's a LOT of guys in the navy and I think you'll meet them ALL
"and then xxxx USNR turned to ask xxx USNR, sorry, I quit. J. Hammond Cap. Merchant Service Ret..

if you are interested in PT boats as I am you will probably like this. the author tries to give us as complete a history of the boats as possible.

Probably a bit too factual almost to the point of being as boring as reading a history book. The narration lacks inflection and sounds almost frantic at times. This is not a typical novel, but instead, a long factual narration of the history of the PT boat including boat numbers, commander's names, rank and service (USN/USNR). And yes, the PT-109/John F. Kennedy saga is included.

If you want detailed information about PT activity

If you want detailed information about PT activity in the Pacific this is the book for you.

I truly enjoyed this book on the PT boat. I would recommend it to anyone. It was well documented and well written.

WWII IN MY Family HISTORY

I ask My Dad that Boomer generational Q., "What did You do in the War, Daddy?" His answer was, "Oh, I was just on a Crash Boat." Of course, that was followed by, "What does a Crash Boat do, Daddy?", which was followed with, "Oh, it goes around saving people." Somehow, at 2 1/2, I knew ~ in the middle of people killing each other, My Dad was 'Saving People'! You couldn't have a higher calling than that in war! In later years I have walked up to and looked up at the bow of the USS Wisconsin, and I understood what he meant!

Now, I am researching everything I can on the Solomon Island and PT & Crash Boats, not only was my Dad in theater but I also had an Uncle, who was a US Marine and fought on Guadala Canal & Iwo Juma. So, History. And, I found this book fascinating.

literally, a play by play of PT boat activity

if you're looking for a play by play of PT boat activity on WWII, this is a five star book. I thought there would be more analysis on PT boat tactics and training. however, if you want the play by play, this would be amazing! it was still interesting, just really long and specific.

The narrator put you in coma. Too much detail. Would love a refund on this book!

I found the information about the boats, crews, tactics, and strategies to be very interested.

Then when I got to the actual battles, it became extremely monotonous. Basically the same battle reports told over & over.