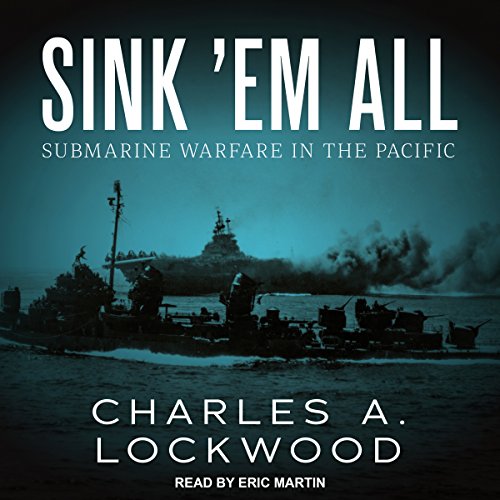 By: Charles A. Lockwood
Narrated by: Eric Martin
Try for £0.00

Sink 'Em All was originally published in 1951 by Vice Admiral Charles A. Lockwood, the US Navy commander of the Pacific submarine fleet during World War II.

Lockwood, in his leadership role, knew the skippers and crews of the submarines and retells their wartime successes and tragedies with an intimacy and realism often missing in second-hand accounts. Lockwood also recounts his efforts to improve the provisions and after-patrol accommodations of the submariners and of his on-going struggle to improve the effectiveness of torpedoes and other tools vital to the war effort.

What listeners say about Sink ‘Em All

About as good as a book can get

Well read and riveting material. Will absolutely run it through again some day for sure.

Best of the best

I have read many submarine books, some fiction and most nonfiction written by captains or crew members who fought WWII in the Silent Service. Anyone familiar with this part of history has heard of Adm. Lockwood. But, in this book you get to know him and his inside view of the war, boats and crews. What a great service these submariners gave to our country and what an outstanding leader Lockwood was. He was the right man in the right position at the right time.

This book is for, primarily, die hard US Navy Pacific Theater history buffs. Chocked full of detail with a rather dead pan, “just the facts ma’am” delivery, it is really, really good. The bravery of the men involved is articulated, to be sure with some prejudice, in such a fashion as to bring forth a tear now and then. I confess, I loved the book.

I have great respect for Adm Lockwood. He was a great leader and patriot but writer he is not. This is not an edge of your seat storytelling of the exploits of those forgotten submariners of the silent service. This is however, the complete recollection of the facts in chronological order from the man who was there, that made critical decisions, and knew those individuals personally. This is also an old book so you can disregard the last two or three chapters. It's an ok book with a personal touch.

Excellent book and reading, except for some pronunciations of names and places. Gave me a chuckle once or twice.

I think the narrator should have gone over the book before narrating it. Too many pronunciation mistakes that probably only bother two groups of people : WWII history buffs and those who know the correct pronunciation of non-English words.

I have the paper back and I just don't have time to read it.

I got the audible book and was horribly distressed by the narrator's pronunciations of many of the places and submarine names!

Otherwise it was a fairly good narration
and would have gotten 5 stars.

An excellent historical record of the sub service

Once you understand the intent of the narrative to be details and description of the history, the men (the author's generation has virtually zero political correctness -and it was written in 1951), the subs' technology genesis and evolution, and the stark realities of war, you'll like this book.
There is no flowery prose or intent to enthrall us with literary skill. The Admiral uses the language very well and brings these factual events across cleanly.
The narrator is excellent, his tone and delivery match the manuscript nicely.

After having read several World War II submarine novels which covers patrols in detail, I find this book does a great job giving an excellent overview of the whole submarine service during World War II. It also gives brief details about certain submarine actions. It is a great book for submariners who would like to learn more about the submarine heritage.

One of my favorites

Just look at who wrote it! Charles Lockwood - the submarine Nimitz! Listened about 1 hour every night and couldn't wait to get to it.

Excellent walkthrough of the war as seen by the sub service. Follows the timeline of WW2 and I like the month by month numbers it reveals....haven't seen that before.