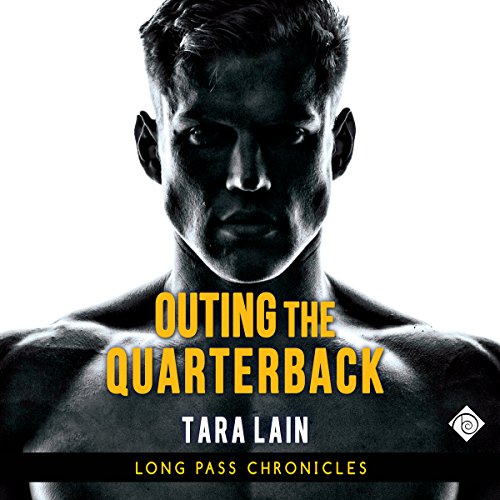 By: Tara Lain
Narrated by: John-Paul Barrel
Try for £0.00

A Novel in the Long Pass Chronicles

Will Ashford lives in two closets. He meets his wealthy father's goals as both the quarterback for the famous SCU football team and a business major, but secretly he attends art school and longs to live as a painter. And he's gay. But if he can win the coveted Milton Scholarship for art, he'll be able to break from his father at the end of his senior year.

In a painting master class, Will meets his divergent opposite, Noah Zajack. A scarred orphan who's slept on park benches and eaten from trash cans, Noah carefully plans his life and multiple jobs so he has money and time to go to art school. Will's problems seem like nothing compared to Noah's. Noah wants the scholarship too and may have a way to get it, since the teacher of his class has designs on him--a plan about which Will isn't happy.

What listeners say about Outing the Quarterback

Not the best narrator

Will is in his last year of business school (to satisfy Daddy) playing the straight, star quarterback for SCU. What he really wants is to be a gay painter, but he can’t afford to be honest with either his sexuality or his preferred profession. His goal is to win a scholarship for next year and be honest then.

Noah is an out and proud artist, working 3 jobs to pay tuition, hoping for the same scholarship Will is after because he’s so broke he’s having a hard time paying the bills. In the meantime he’s having an affair with his teacher, who is also a judge for the scholarship.

So… you can guess what happens. Will and Noah meet. They start a relationship. Noah and his professor end their relationship (this isn’t taken well by the prof.). Will gets outed by the media. Noah loses the scholarship (sort of) due to sour grapes. Will and Noah make a go of it and with some razzle dazzle Noah ends up with a scholarship, Will ends up in art school and we get a really lovely HEA.

**
I’m a huge Tara Lain fan and this book just sort of underwhelmed me. It took several starts for me to finish, I just wasn’t swept overboard by any of the elements. The attraction between Will and Noah wasn’t spectacular. The storyline was predictable, which can be fine if there are other things to hook you in, but I just didn’t feel any zing with this story.

I really liked the secondary characters, Jamal and his sister Ev, and am excited to read Jamal’s story in the next installment, however.

I thought the writing was excellent, it was edited well, and of course I loved the happy ending, but overall, I just wasn’t wowed.

John-Paul Barrel is a new narrator to me. I really appreciated that he tried to differentiate each person with a unique voice. Some of the voices were better than others. I didn’t care much for his intonation and emotionality (acting) and didn’t like his overall “narrator voice” much. For me, unfortunately, it detracted from the overall listening experience.

Wow. And not in a good way.

One. I wasn't expecting the sex. That's my fault for not properly researching before I bought the book.
Two. I've read better written fanfiction. This book was almost painful. I rolled my eyes at the author's word choices more times than I can count.
Three. I can get more annotation and emotion on the Text-to-Speech app on my phone, than this man has when he's reading aloud. And I am not exaggerating at all. It's bad.
I knew I made a mistake the very first sentence he read aloud. But I paid about $13 for this book. I was going to give it a chance. I barely made it to chapter 10. I regret spending my money and wasting my time on this. I'm returning this immediately.

Sorry Tara, but this one didn’t shine.

I read and listen to a ton of gay romance and M/M novels and even though that doesn’t give me credentials as a bonafide critic I have to say that this book was one of the weakest I ever came across.
I listened to it as an audiobook. And to be honest I only got through the whole story with the aid of 1.5 speed.
The story itself was not compelling as the two protagonists lacked depth and likability. The writing was uninspired and I could barely stand the catch words and phrases that kept lamely repeating throughout.
The narration was poor. Again, no offense to the narrator or editor, but really? Wow
Mostly dull and monotonous rambling lacking dramatic timing. Add to that some seriously effeminate exclamations and you can make any semi thrilling scene boring or a serious turn off. Which further added to the disconnect between listener and storyline.

Sad. The overall premise held promise and the Noah character at least could have been compelling.
Again. This one failed me on every level.
Best thing I could say about it that I made it to the end. And that was a struggle.

Good story, not a good narrator

I don't know what entails getting a narrator but I'm guessing it's not hearing them read something. He read the whole book with this dramatic voice. A bad acting dramatic voice. If you can get past that, it's a good story.

Great Story about being in the Closet

This was an awesome book. I really had a hard time putting this one down. There was so much angst and a need to know how it worked out or if it did. I was sucked in from the very beginning with Will and Noah and their off the charts chemistry.

There was a lot of twists and unexpected surprises in this story. I was cheering for the couple and shouting when bad things came up and crying when things would turn bad or not the way that benefited the men.

It's hard to say much without giving away the numerous surprises, but I will say this is a story I highly recommend. It really displays the challenge of being in the closet and wanting someone you shouldn't.

The narrator of this book did a great job of bringing a little something more to the characters and the story while enhancing the emotions and feelings being dealt with.

I received a free copy of this book to read for Inked Rainbow Reads in exchange for an honest review.

disclaimer: i typically do not like audiobooks. i was however extremely impressed with the narrator. he had at least 5 distinct voices that were really great to hear.

i thought this was a decent story...it covered a lot of issues:
- in the closet gay athlete
- a kid trying to live the life a parent wanted and hiding what he really wanted
- child abuse and abandonment
- racism

i really liked their instant attraction and chemistry - they were really great together.

i didn't like how long it took Will to decide to go after what he wanted. i didn't like how he treated noah at times and how quickly noah forgave him. i also thought Will's dad's reactions to a few things were a bit unrealistic.

the writing was pretty decent...although mr. cockamus was a bit much and a couple of times i squirmed by what was said.

overall, it was a good book that i would recommend and i'm anxious to see what happens in book 2.

Will is a rough and tough quarterback who is not ready to rid himself off all the crap holding him back. He is living his life for everyone else and denying his most basal needs. Although he has great friends and a rich family, he has to hide what really makes him tick, his art and his love for being a bottom.
Noah is a struggling artist that has had a hard knock life all the way around, but a survivor. He does not let anyone or anything steer his choices in his life and certainly doesn't hide behind societal walls.
The two are thrown together by a masters level art class where they are both vying for the same prestigious scholarship.
Life is not going to be the same for either one, but is Noah going to give Will the push he needs to come out of the closet?

What I liked about this story was that Noah is such a strong gay man. He knows what he wants, he has goals and he does not let anyone push him around. I liked that Will had such strong friends that were willing to pick him up and even lie for him if it meant he could keep up a persona that he really did not see any value in.

I thought the romance felt bland and even at times forced. I did not like some of the inuendos the author used to describe the sex scenes in this one, frequently laughing out loud thinking, is this the stuff they really say? Spunk and sweat? The author also used one word way too many times in this book.

As for the narration, the narrator had a slight lisp which made his reading of this book distracting at times. I was not crazy about his narration for these characters finding him not to be as convincing as other narrators have been. This one was just okay for me. 3 fangs from Paranormal Romance and Authors That Rock.