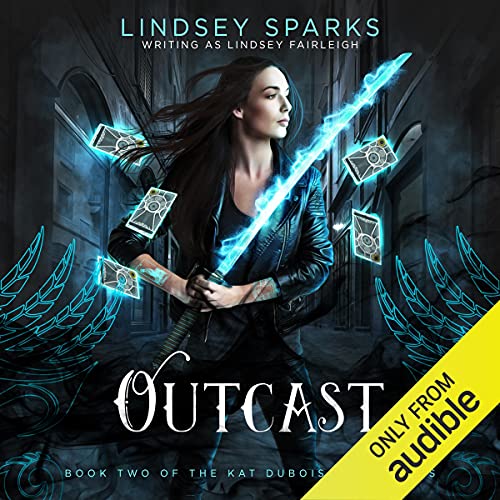 By: Lindsey Fairleigh
Narrated by: Julia Whelan
Try for £0.00

The sequel to Ink Witch. War has broken out among the immortals. It's time to choose a side.

Kat Dubois never asked to be the emissary for the good guys. Diplomacy isn't her strong suit, and patience isn't one of her personal virtues. But when a millennia-old god asks you to do a job to further the war cause, you do that job...especially when you're the opposition's most wanted.

Kat's mission is complicated when a mysterious disease crops up among Seattle's homeless population. It's up to her to find a cure while the infection is contained, and to do that, she must go straight to the source - Ouroboros. It's been a week since Kat promised to come after the twisted corporation; the time has come for her to fulfill that promise.

What listeners say about Outcast

Alright, I'm done with this series..

Ok, lets start with what's wrong with this series, other than it's not written for older people. Kat is 38 years old but looks like she's 18, the age she was when she became immortal, and she has tattoos all over and piercings on her face, too. AND she's really kinda slutty, screwing two different guys while always acting like she's crazy for Nik. I don't get it. And Nik is thousands of years old but became immortal when he was around 26 AND he's tattooed and pierced on his face too. So, I'm going to assume this author is in her 20's OR she's writing the way she thinks the younger people want to read. Either way, I don't think this author is for me.

It was a good story line, and Kat will kill you in a heartbeat, but books 1 and 2 were enough for me.

There was sex (with Garth, not Nik) and the F-bomb was used 18 times.

As for the narration: Perfect! Julia Whelan (AKA Sophie Eastlake) one of my top 5 favorite narrators.

I'm interested in the story line, but there are sooo many things that annoy me. 1- the repetitive explanations. How many times are you going to explain Nic shared a body with Ra. How many time are you going to mention being stuck at 18 body and hormones. 2-I feel like she should have just been 18 because body and hormones shouldn't have anything to do with mind set. She thinks and acts like an 18 year old all the way around.

I'm going to stop here 4 more times is going to drive me crazy. I'll check out the author and see if she has improved. Licks lips!

I love this genre and this is becoming one of my favorite series. relatable main character

Literally just finished and thought "Have I really listened to this for more than 6 hours?" This story is so good, and I can't wait to listen to the next book!

Love it as usual!! Couldn't put it down! Can't wait to listen to the next installment!

Performance first: The narrator has a month voice but her tones and inflection make me want to punch her in the throat. Or at least give her a swirly. The voice she gives Kat has an entitled snarkiness to it. I like snarkiness but she makes Kat sound like the know it all 18 year old she looks like I stead of the experienced 30 something she keeps insisting she is.

Story: Even beyond the voice this heroine is a struggle for me. Kat spends a lot of the first two books doing stupid things. Sometimes it's making decisions that are just really less than bright and other times it's wasting time she doesn't have on absolutely useless guilt.

Kat is one of those people who simultaneously rejects being placed in a leadership role while taking actions that remove other's ability to make their own choices. Because clearly she knows best.

All the complaining above aside, Kat IS trying to do good. She actually cares. The world building is interesting and I may check out the other series set in this world. Kat has potential. And that is why I'm giving this series a 3. I'm likely done with Kat's story but I may check out Lex's since she seems more my type of heroine. Kat for all her caring just isn't trust worthy. She's spending too much time fighting herself for me to trust that she's seeing things as they really are, and if you can't trust the heroine of the book you're reading, how can you root for her?

Fine but how many times ...

I am enjoying this book and will buy the next one. I love the character Kat and how she is written authentically but not following societal norms about a hero. Character development is awesome. But, really, the author uses the expression “lick my lips“ so often it’s hilarious.

these books go deep.
I wish the prequels would come out on Audible as of now I only see the first book out of the trilogy and it started out good