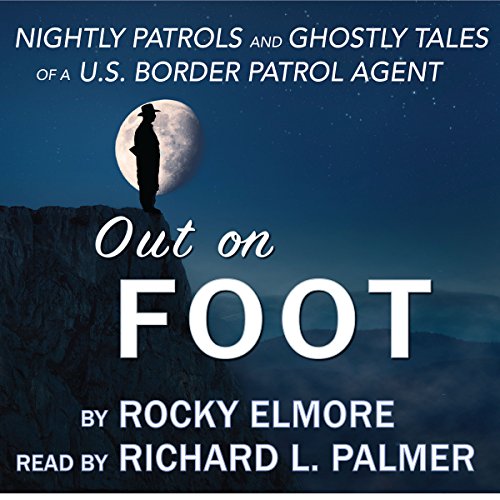 By: Rocky Elmore
Narrated by: Richard L. Palmer
Try for £0.00

When Rocky Elmore joined the United States Border Patrol, he knew it would be a journey fraught with danger. But little did he know that the very real trails he walked night after night would soon lead him into surreal encounters from a different dimension. This was never more evident than when the ghost of a recently fallen fellow agent began to appear on top of the cliff from which he died. It marked the beginning of the end to one of the most bizarre series of events in the history of the US Border Patrol.

This collection of true stories provides a rare look into law enforcement that includes not only the routine nightly patrols of the USBP but also actual paranormal activity as it happened to the agents in the field. Listeners will go on nightly patrols with the agents of the Brown Field Border Patrol Station, and will face their worst fears as they come face to face with smugglers, mountain lions, ghosts, and even a Sasquatch in this isolated no-man's land. Out on Foot takes place in the mysterious Otay Mountains just east of San Diego, California. It is an emotional roller coaster ride that is not for the faint of heart.

What listeners say about Out on Foot

liked this book far more than I anticipated. very interesting insight into a part US security that is littered with misinformation in the media.

I loved this book, I had no idea how many people were going over the border each night. These guys really are the unsung heroes risking their lives and no one really knows what they do. Lots of really interesting stories

Having heard Rocky on several radio shows and whilst preparing to interview him for my own, I splashed out on this book. I'm so glad I did.
If you have an interest in Law Enforcement and anything more than a passing interest in the paranormal, then this is most certainly the book for you.

This story is incredible. The facts as the author has strung them together and the inflection of the narrator's voice at just the right moments kept me in such a state of anticipation I could hardly wait to hear the next encounter. I highly recommend Out on Foot.

A great look into the border patrol and what they do.

Excellent narration, the guy's voice is really well suited to this kind of story. Sounds a bit like stories told around a campfire.

Where does Out on Foot rank among all the audiobooks you’ve listened to so far?

Definitely one of the best audio books I have listened to. The story is entertaining and I have no doubts that it is true. The narrator selected was a perfect choice for the book, giving a non-stop, great delivery!

Have you listened to any of Richard L. Palmer’s other performances before? How does this one compare?

Palmer gives the performance of a seasoned professional.

Excellent! On of the best audio books of my considerable collection.

Never knew the rigors of being a BP Agent until no

Awesome story, was capitulated the entire time. Not enough credit is given to border patrol.

I can't believe I've been so ignorant about the facts of everyday happenings by these men and women. Definitely will be looking at them much differently and with way more respect now thank you.

I enjoyed this book immensely and came away with a tremendous respect for the border patrol. Even without the spooky happenings it takes tremendous courage to patrol our borders! There are certainly some interesting tales to ponder in this book and it raises more questions than answers. Drives the point home (at least to me) that there is more out there than we can explain.

Not a lot of ghost stories

Nothing wrong with this book. It's written in plain English and it's easy for the reader to follow along and the stories in the book are great. I'm knocking off one star, however, because I thought it was going to focus on on the paranormal aspects of the Border Patrol agent. Instead, I got a story about a lot of other stuff about Border Patrol life and a short amount of the paranormal. Still a good read, but it wasn't what I was expecting.

Great unusual stories from beyond the average Joe

I heard the author speaking on a pod cast with this calm deep voice. It came alive fast and I was hooked and got the audio book. The book is really good! What's bad is the editing that coud have been a lot better and the voice talent is too stiff, trying to sound cool more than create dynamics and I can hear every punch in and that sucked. It lack depth this way and it bothered me all the way as it could have been a 5star! WHY didn't the author voice record himself, he has the BEST voice ever!? Nonetheless, the stories are great and we are invited into a world many few know about and I loved every (almost) bit of it! This turned into a script would make an excellent MOVIE! Make it happen!

I heard the authors story on my favorite podcast and decided to buy the book. Huge mistake, book is super boring and nothing like the podcast.

I like it. It has a lot of really good stories.

Good book. The narrator really, truly sucks though. Wish there were more books that expand on the topic of service from our Federal law enforcement agencies. The man who actually wrote this book, is a much better narrator than the man who narrated this book. His name is Ricky Elmore. He also narrates stories in two episodes of the podcast, "Spooked". He narrates episodes titled, "The Shadow Men", and "Borderlands". Check it out, it is a much more enjoyable narration than that of this book.