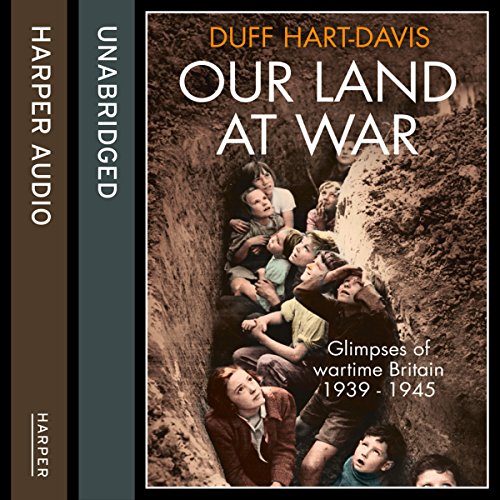 Our Land at War

By: Duff Hart-Davis
Narrated by: Hugh Kermode
Try for £0.00

A rich account of the impact of the Second World War on the lives of people living in the farms and villages of Britain.

On the outbreak of war, the countryside was invaded by service personnel and evacuee children by the thousands; land was taken arbitrarily for airfields, training grounds, and firing ranges, and whole communities were evicted. Prisoner-of-war camps brought captured enemy soldiers to close quarters, and as horses gave way to tractors and combines farmers were burdened with aggressive new restrictions on what they could and could not grow. Land Girls and Lumber Jills worked in fields and forests. Food - or the lack of it - was a major preoccupation, and rationing strictly enforced. And although rabbits were poached, apples scrumped, and mushrooms gathered, there was still not enough to eat.

Drawing from diaries, letters, books, official records, and interviews, Duff Hart Davis revisits rural Britain to describe how ordinary people survived the war years. He tells of houses turned over to military use such as Bletchley and RAF Medmenham as well as those that became schools, notably Chatsworth in Derbyshire.

Combining both hardship and farce, the book examines the profound changes war brought to Britain's countryside: from the Home Guard struggling with the provision of ludicrous equipment to the role of the XII Corps Observation Unit, whose task was to enlarge rabbit warrens and badger setts into bunkers for harassing the enemy in the event of a German invasion, to the unexpected tenderness shown by many to German and Italian prisoners of war at work on the land. Fascinating, sad, and at times hilarious, this warm-hearted book tells great stories - and casts new light on Britain during the war.

Praise for The War That Never Was:

“Remarkable story .... Hart-Davis tells splendidly the astonishing tale he has uncovered.” (Max Hastings, The Sunday Times)
“Duff Hart-Davis has taken over the writing of this book from Jim Johnson's second-in-command, Tony Boyle, who was working from Johnson's archive; both men died before the work was completed. He has done his extraordinary subject justice. Why did any of them get involved with the project? Well, the pay was good, but that is exactly the sort of thing men say to cover their enjoyment and excitement. The fact of the matter is that it was a terrific adventure.” (Philip Hensher, Spectator)
“Plenty of books claim to be about forgotten aspects of the past. Yet Duff Hart-Davis has managed to go one better in this tale of British mercenaries and Egyptian skulduggery by unearthing a war that has hitherto remained more or less secret” (James Owen, Mail on Sunday)
“This dramatic piece of history is thoroughly researched, drawn from first-hand accounts of the mercenaries' experience. Written at the pace of a James Bond thriller, Hart-Davis leavens his gung-ho tale with details that are at times touching and humorous” (The Herald)
“An extraordinary story that needed to be told … Duff Hart-Davis tells their fascinating story, which will be new to many readers, remarkably well” (Charles Guthrie, Literary Review)
“An extraordinary story, told for the first time” (Today, Radio 4)
“Their gung-ho story is told with much buckle and swash” (Times)
“A barnstorming history” (Independent)

What listeners say about Our Land at War

Well evoked, but a little repetitive.

This is a thorough review of the various strands of experience and behaviour which made up the domestic experience of those who lived through the German offensive on Great Britain in the hostilities of 1939 to 45. The attention to detail, and the discovery and re telling of personal stories of the British is well done, but with inevitable overlaps from one section to another it seems to me that it might have benefited from a little judicious editing.