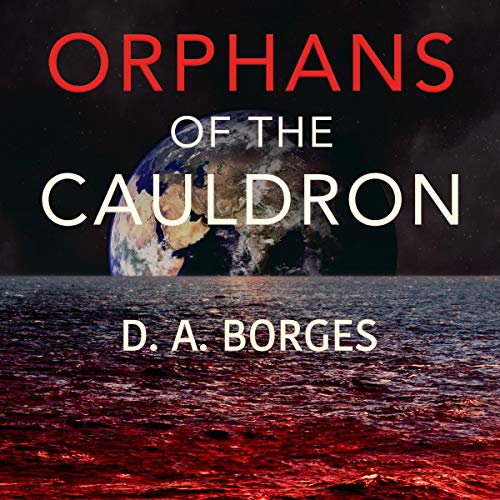 Orphans of the Cauldron

Orphans of the Cauldron

By: D. A. Borges
Narrated by: Bob Johnson

A virus unleashed; humanity unprepared. Civilization faces extinction as the boiling planet erupts in unimaginable turmoil. The changing climate unleashes furies and chaos that defy solution including a global pandemic unlike any seen before. Follow the heroic exploits of America's brave public servants as they deal with the best and worst of human instincts in this exciting novel by D.A. Borges.

As in his other books, Isabella Ascending, Mars' Furnace, and Ignited: The Torch and Fuse, Borges weaves a tale of breathtaking adventure that transcends the headlines of today.

Delve inside the lives and travails of a familiar cast of characters who protect us from the threats of cyber-warfare, nuclear blackmail, and climate-driven crises in his highly relevant new novel Orphans of the Cauldron.

What listeners say about Orphans of the Cauldron

Many continents and story lines all come together in a nice conclusion. This book is a warning I wish so many could read. Sure it’s science fiction but the premise is based on our current world climate situation. If only Trump would read it. Narration by Bob Johnson was very good. I was given this free review copy audiobook at my request and have voluntarily left this review

I was given a a copy of this audio book for free in exchange for an honest review. And, I have to say, wow!! I really enjoyed this one. I like a lot of things like this, Clive Cusler, Tom Clancy, Brad Thor, even Robert Ludlum back in the day, and this had it all. Plagues, storms, fires, a bit of espionage, a bit of military, you name it, if you couldn't find anything to like here, you were in the wrong place. Bob Johnson's narration brought this thing to life and gave it that punch that it deserved to really get you sucked in. I wanted to see how all this unraveled, and there was even just a tad bit of emotion to make it even more real. This is a great book, and one that will stick with me for a while, just because of its timely manner what with our own pandemic, weird weather and climate stuff going on, it's one to make you think, and wonder. Are we all, Orphans of The Cauldron as the book states? Hmm. Time will tell, and so will the planet. Right? Happy reading yall!!

A winner for lovers of sci-fi

A very enjoyable sci-fi set in what could be current times. Well developed characters had me wishing I didn’t have to listen in a few hour increments. I love the fact that there were several strong female characters and one villain I loved to hate. The narration was top notch and really set the tone throughout the book. I would recommend this book to all lovers of sci-fi. I received this audiobook in exchange for leaving an honest review

Good warning to pay attention to

I was given this free review copy audio book at my request and have voluntarily left this review. This is a sci-fi book but it is very close to home with the current status of the world. The author kind of went "ok what is a topic? Climate change? Plague? Virus? Military? Dark side of human nature? Ok let's do them all!" He whipped out this puppy and oh boy, it was one heck of a ride. I loved this book from the first sentence. The narration was amazing and I thoroughly enjoyed everything about this book. This is definitely an author to put on my "favorites" list.

This book to me was mostly about climate change, and if you believe in climate change then you should read this book. I found it to be a lot about globalization maybe that’s not what it was about but it’s sort of what I took from it. All in all it’s a good it’s a good book I would read it if I were you.