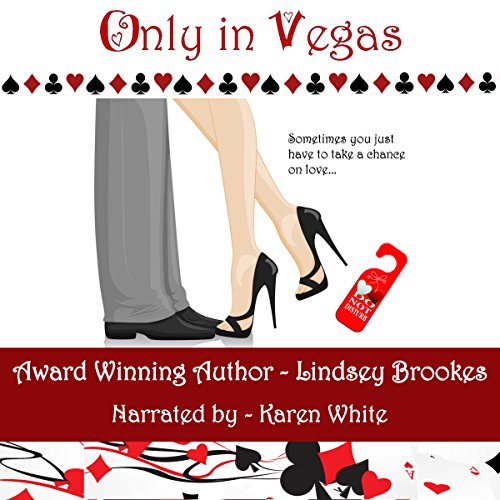 By: Lindsey Brookes
Narrated by: Karen White
Try for £0.00

Being Italian and being sexy are supposed to go hand in hand, but somewhere along the line 26-year-old Angelina Rossi's genes forgot their Italian love goddess heritage. And now everyone at her work knows what a failure she is as a woman thanks to her ex-boyfriend and coworker at Sunset Travel, who has given Angie the nickname of Ice Princess, claiming no man will ever thaw her.

Thirty-year-old business executive Trey Landers isn't surprised by much his best friend and neighbor, Angelina Rossi, throws his way. But this time she throws him one hell of a curve ball. She not only wants him to accompany her on a business trip to Las Vegas, pretending to be her lover in front of her ex-boyfriend, she wants Trey to give her pointers on what it takes to seduce a man.

A man of his word, Trey's fevered kisses in front of her ex has the ass regretting his decision to break up with Angie. Not that she'd ever consider going back to Rick, especially after discovering true passion in Trey's arms. With that passion comes the realization they're no longer pretending, as the lines of their longstanding friendship and newfound love begin to blur. If only what happened didn't have to stay in Vegas.

What listeners say about Only in Vegas

My previous encounter with this author had not been good. I decided to risk another book because I liked the story line. Must say I have been pleasantly surprised. The two main characters are likeable & it is a nice story of two best friends who realise that there are many sides to love. Steamy sex ...nope. There is some sexy bits but they really aren't hot ones however, this book does not need them. The story line carries the reader without needing sex. Not the best value as for the money it is not many hours but a nice book.

This is a love story! A beautiful, emotional love story between two people who nearly didn't realize they were in love.
And it's told in a lovely, light, humorous way.
The narrator knows her job and does it well.
If you read for enjoyment and entertainment then this is e book for you. Enjoy!

They've been friends most of their lives. Angelina is his younger sister's best friend and Trey has been one of her best friends because of that. He's married to his business; she just wants to prove her ex-boyfriend/coworker wrong - she's not an ice princess. Trey agrees to accompany Angelina on a work trip to Las Vegas so her ex will see her in a new relationship - and see that the rumors he'd spread in their office were wrong.

The story was ok for me. I found this friends-to-lovers romance funny, sexy and predictable. I do wish there'd been a little more depth to the characters and plot. That said, I'd try another book by Lindsey Brookes - especially if Karen White narrates.

Karen White bumps the book up a star with her entertaining narration. She brings the characters to life and had me laughing several times with her delivery.

If you're looking for a very light and sexy romance you'll find it with Only in Vegas.

Cover: I almost never comment on book covers but I think they could have done a lot better with this cover.

*I received a review copy in exchange for my opinion.

laughed until I cried

this book was wonderfully written, brought me to side splitting laughter and left me smiling at the end.😁

I enjoyed this story and the narrators were good. This story starts a little slow but it is very good. Give it s chance.

Would you listen to Only in Vegas again? Why?

Angel. She had so much to learn and did so with gusto.

This charmer of friends discoverering they are so much more.is onewith tenderness and humor.

Would you try another book from Lindsey Brookes and/or Karen White?

I purchased this book as Karen White is one of the best audio readers. If you liked her try:
Julie James series, her best reads. Jill Shalvis Animal series. Her male voices are her best and her pace always brings the best out of a good author
This author is not for me!

Would you ever listen to anything by Lindsey Brookes again?

No, she is not for me. I am a core romance buyer and I am always looking for a great new writer. This author has great humor, but there is that "something missing" that does not take the easy dialogue to the next level. This is a simple story as other reviewers stated, but it was too elementary when heroine had lines. Gads! I love Ms White reads, but even she can't save this one for me.

Her male voices and pace are her best features.

Heroines dialogue needed to be just a little bit more sophisticated! The heroines elementary lines devalued the humorous parts, what little it had.

Fun, light hearted listen. The reader dogs a great job, too. I recommend this book.

Love a laugh out loud book

This book was a new author for me and I was pleasantly surprised . I found it very cute and funny at times . It was a good story and had charming characters .I really enjoyed this book . I will be adding this author to my fav list.

Humorous -- it will keep you grinning, and will have you laugh out loud about a feather duster wielding maid. Totally predictable -- which makes this a ridiculously easy read and possibly not what you're looking for, BUT it's also a very fun comfortable read. Fun because the characters have a great playful repartee. Comfortable because the characters are down to Earth.

I received this audiobook from the narrator through a Goodreads request for reviewers. This is the kind of entertaining book that makes you so glad you stumbled upon a good listen and you're happy to submit a review. Karen White, the narrator, did a great job with the narration -- her pace, her intonations, changing her voice for the various characters. She has a great voice for the shy, hesitant female character and also did well with the male main character. The only drawback, in my mind, would be that Ms White gave the female main character tension-filled mid-sentence hesitations throughout the entire book, even during scenes that weren't particularly tension-filled and didn't seem to call for the character(s) to sound as if they are trying to choose their words oh, so, very carefully. This vocal hesitation was perfect in other scenes, just not throughout the entire.

If I have nothing but good things to say, why do I give this book only three stars... it is clear that not every good story that entertains and makes the time pass quickly is a five-star book. This is a good book. A good story with good characters. I enjoyed my time with this story. Unfortunately, it is not particularly moving. It is very predictable, not original, intriguing, surprising or profound. Sometimes (plain) vanilla is just the perfect taste you need.

If you are reading this review and if you can imagine a time between your other reads when you would like light, fun and funny, keep this book in mind. An easy listen when traveling or commuting, when waiting in the carpool line, when walking.... anytime!

good book, every thing you look for in a romance

I thought this book was good. I love the narration. I love the story line and the way she falls in love. everyone should fall in love with their best friend. I like the antagonist in the book. it all made for a great read. well done. I would recommend it to anyone.