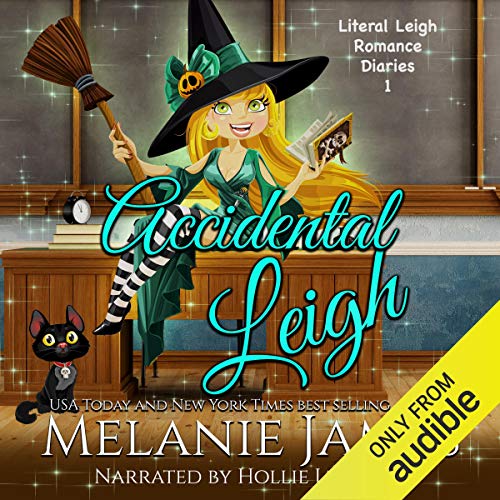 By: Melanie James
Narrated by: Hollie Jackson
Try for £0.00

What listeners say about Accidental Leigh

A Good Quick Start To This Light-hearted Series

This is a fun light-hearted read with lots of eye-rolling on my part. Leigh my usual choice of leading lady but then this isn't that sort of read either. This is the perfect quick chick-lit summer read, perfect for those hot days sat on the beach or around the pool with a glass of something cold to hand.

Be warned there is a cliffhanger at the end of this book but we do get the first chapter of the next installment at the end.

This story is light, fun, and entertaining. The tale is about how a young woman becomes a witch and since she doesn’t know what she is doing, how her first spells go awry. I enjoyed the story but there are some cusswords used and some descriptive sexual scenes. Hollie Jackson is very delightful to listen to as a narrator. She adds enjoyment and excitement to the story with her style. I requested this audiobook from Audiobooks Unleashed and have voluntarily left this review.

I just loved listening to this Leigh is great and teamed with Kelly and Lynsey they are a riot.

What a refreshingly simple start...

I really enjoyed this start to the series... Fun characters, quick witted and just all round silliness!

I enjoyed the writing style. The pace of this was fast, but not complicated, meaning it was so easy to trundle along until, before I knew the book was over!

I really enjoyed the performance. The narrator had a good range and comedy timing! I look forward to the second book!

Laugh-out-loud fun, thoroughly enjoyable and highly recommended. I'm looking forward to the rest of the series.

This is a super cute and light listen. Snarky and humorous it definitely held my attention. Grab this one if you want a quick and funny escape!

I fell in love with this series INSTANTLY. I did not want to stop for anything. It sucks you in from the very beginning.

Not like anything I’ve ever listened to. I enjoyed this story and it’s characters. This is about an elementary school teacher that comes into some magic and is trying to figure out what’s going on. I definitely want to see what’s going to happen in the next book in the series. The narration is great. I recommend this book

This book is so refreshing. The humour written in it is fantastic. The characters are good and have excellent personalities. I’ve been laughing all the way through. Excellent performance from Hollie.

What made the experience of listening to Accidental Leigh the most enjoyable?

Luke and Derek when they were under the spell

She does an excellent job at voice narrating

Would you consider the audio edition of Accidental Leigh to be better than the print version?

Personally, I enjoyed both equally. Hollie does a good job bringing Leigh to life.

This is the first Audible I've listened to that has been narrated by Hollie, but I think she did a wonderful job.

Either in print or audio, this book has me laughing. Leigh and her adventures with her witchy writing desk are pure entertainment.

Leigh has some serious mishaps in her accidental witchy adventures. Either she does't realize what she is doing or it just doesn't work out quite the way she hopes.

Watch out who your friends are!!!! LOL

I really enjoyed this and didn't think I would. Sorry now I left it so long in my library without so much as a glance. It is expensive for the length but I enjoyed it so much I will be purchasing book 2. Had to pay attention as the story skips from real life to fiction in a heartbeat and I did get lost a couple of times but that's the beauty of the rewind.

It was hilarious, actually made me laugh out "very" loud when everyone was asleep and I just couldn't stop. So glad I gave this book a chance. The characters were well developed and very likeable, all of them. JUST TOO SHORT! Mini cliffhanger at the end, just enough to peek my interest and make sure I need to get 2nd instalment.

The narrator, Hollie Jackson was soooo goood I had to check whether she was the author. It felt like she new the characters so well and the story just flowed from her lips. Melanie James can be very satisfied because Hollie did an amazing job. Sadly many times a narrator can completely kill a book and other times no matter how good the narrator, the book just hasn't "got it". In this case, both the book and the narration complement eachother to perfection.


Accidental Leigh is the first book in the Literal Leigh Romance Diaries. Leigh is a teacher who happens to love to read. She decides that over the summer break she should write a novel. She starts looking for a desk and finds one for free. She soon realizes that this desk is not just a normal desk when things she writes start happening in real life.

This book is hysterical. All of the crazy scenes that Leigh writes had me laughing out loud when they became reality and they never had quite the same outcome that you would expect. Ms James has a way with words and she had me engaged from the first chapter and I couldn't put this book down. I cannot wait to read the next book in that series, Serious Leigh.

This was such a fun book to read. It was witty and charming. I found myself laughing out loud. I just can't tell you enough how funny and entertaining this book is! The only thing I hated about the book is I have to wait for the next installment. Don't miss this funny and sexy paranormal romance.

What does Hollie Jackson bring to the story that you wouldn’t experience if you just read the book?

when they were at the petting zoo

This is a great series a must read

Feel in love all over again

If you could sum up Accidental Leigh in three words, what would they be?

What was one of the most memorable moments of Accidental Leigh?

One of the most Memorable moments is Sarah and Bill's experience. It was absolutely hilarious!


What does Hollie Jackson bring to the story that you wouldn’t experience if you just read the book?

Hollie Jackson brings voice and peronsality to Leigh that you just can't get in your own head.

My extreme reaction to this book - was laughter and more laughter.... Loved every minute of it!!!

amazing narration for an amazing book

Where does Accidental Leigh rank among all the audiobooks you’ve listened to so far?

All of Melanie James' audio books have been great in my opinion.

Well Leigh of course! I've read almost the full series already so I know how well Melanie builds her other characters...stay tuned for her next release!

Her interactions with Luna ...don't want to give anything away.

I'm so glad these are being developed into audio books. And I really look forward to hearing the "New" characters come to life.
-Melissa G

If you could sum up Accidental Leigh in three words, what would they be?

What other book might you compare Accidental Leigh to and why?

I've read the entire series of 5 books so far and each one gets better than the previous. It's all written in such a creative and way that you fall in love with each of the characters. I can't compare it to anything else I've read but it reminds me like I've watching a romantic comedy or a funny sitcom on television.

She does such an excellent job of getting the timing right for the humor and she brings a unique voice to each of the characters.

Leigh is just an average single girl that accidentally comes upon a desk that magically recreates everything she writes into disastrously funny reality; for her close friends and family.

I love the entire series and I couldn't wait for the audio version. Even better than the book! I am checking every day for the second book Seriously to come out on audio!

So good I bought book 2 when I finished!

Would you listen to Accidental Leigh again? Why?

Yes. It's a nice, light read and made me laugh. It was an interesting story, but I didn't have to think too hard. Sometimes, that's just what I need.