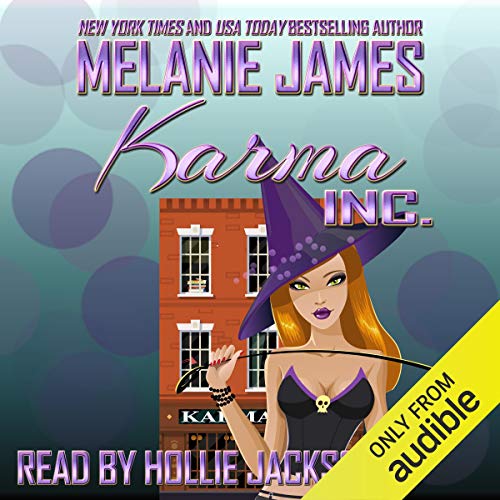 A laugh till it hurts Literal Leigh Romance Diaries spin-off

Witches, Werebears, and Imps. Oh my!

Waiting for karma is fine - for the patient. But for the rest of us, it sure would be nice to give karma a little nudge every once in a while.

Too many dates that turned out to be losers or liars? Have a problem with two-faced backstabbers? And don't even start with the so-called customer service centers. There comes a day when enough is really, truthfully, enough already. For Kelly and Esmeralda, two snarky single witches, that day was yesterday. After applying their witchcraft to dish out a little magical payback, they realize they have a penchant for the dark art of revenge. And who's to say a witch can't make a few bucks with a talent like that?

Doing the odd job was fun and gratifying. Then along came an unusual client with a pitch for an idea, Karma Inc. Reality TV. The witches set up shop in the sleepy little town of Caldron Falls, Wisconsin. By enabling the good citizens to settle old scores, they hoped to transform the town into a virtual coliseum of televised revenge. It didn't take long before a few inconvenient and unexpected dead bodies began to pile up. To complicate matters, Caldron Falls just happens to have more than its fair share of paranormal creatures, not to mention a Chicago mobster seemingly bent on taking over the town.

Can Esmeralda and Kelly solve the rash of unexplained deaths before they get the blame and end up behind bars? What will Marie Laveau and the Witches Union have to say about this? And, as any fool knows, karma carries a roundtrip ticket.

What listeners say about Karma Inc.

I loved the balance with this one of chemistry and storyline and heat. There are plenty of moments that had me giggling like crazy or moments where I felt a deep connection to the characters.

Karma is a witch

Although I did like this there was a lot of swearing, innuendos and even some sex that I am not sure was actually needed and I didn't really think was funny but the characters thought themselves highly amusing.. I am also not sure which category this book should come under audible has it under humour & satire, I could see why it might be funny but it misses the mark for me. I have also seen it under romance and while there is a love interest and sex I wouldn't call it a romance. The story starts of slow and the main character is on trail (for what I don't know) and then processed to tell us what happened under a truth serum. Okay on to what I did like, the characters were interesting and with a talking biker dressing frog certainly varied , I especially liked Gertie. Once the mystery got under way I enjoyed it more but I confess with the accent the narrator used I had worked out the twist with one of the characters. I did like the spell casting for the karma part of the story but found the idea part of it was better than the practice. I think I will probably give book two ago just to see what it is like.
After a bad date ends with the pizza guy crashing into her car before driving off, Kelly has had enough and plots with her friend Esmeralda to get her revenge, using magic they have always been told to stay away from. When this turns out so well The pair decided to go into business helping other people get the justice they deserve. With help from friends they set up the business and start to do well. Until a client called Gisele talks them into moving to Caldron Falls to star in a Reality tv show dishing out there own and unique karma. But things are not all that they appear in the sleep town and it seems that someone has gone to a lot of hard work to set Karma Inc up for murder. Will Kelly and her friends be able to work out what is going on before it's to late?
I really liked the narrator, as she used some really good accents for the characters. I especially liked Gertie's which is probably why I liked her so much as a character.
I was given this free review copy audiobook for audiobooksunleashed at my request and have voluntarily left this review.

Oh how I loved this book. It is a little bit different of a story about witches and all the trouble they can get into (and some of them are quite comical). This is a new series for me that I will definitely keep listening to.

Such a great story and Super easy to listen too. Perfect for any mood your in I would definitely recommend it to anyone! The narrators voice was very smooth and clear with the words.

It’s a good story- lots of interesting characters and twists, but the narration is a bit off putting at times.

Another great tale by Melanie James

I have found that when a good laugh is needed I can always count on one of Melanie’s Paranormal Romantic Comedies. The characters are so cute, especially Gertie (with a great voice of Hollie Jackson).

Looking forward to listening to the next one

A good story with a host of interesting characters. My favourite being Gertie who had me chuckling throughout.
I like the whole Karma inc service idea, pointing Karma in the direction of those that need a dose, how great would that be? :-D
Overall an enjoyable read or listen if you have the audio book.

I laughed so much it hurt. This book was so much fun, I absolutely loved it. This book is a paranormal mystery. Karma Inc. Is a company to cause karma into the world when you have been wrong. Hollie Jackson was so much fun with her narrating, she kept your attention all the way through this story. This is my first book by Melanie James and I am hooked...I want more. I highly recommend this book, if you are looking for a fun entertaining story.

I thought this book was a very enjoyable read. It made me laugh, the mystery was fun to solve as the book progress, and on top of witches, there were talking cats and a very sexy werebear!
Hollie Jackson is an incredible narrator! She had the perfect amount snarky sass! She preformed the book flawlessly! I have already purchased another Melanie James/Hollie Jackson book!

***I received a free copy of this audiobook in exchange for an honest review.

I also loved the premise of the book: this was a fun book, no angst about them being witches and the disadvantages of that. No , this book was all about the power Kelly and Esmeralda had and how they used it to do good (some people need a good kick) and I wish Karma Inc was real so I could hire their services.

Its really difficult to choose just 1 character. Kelly and Esmeralda are awesome. Barney is a hoot. The all ensemble contributed to the books awesomeness. So many funny moments.

Which character – as performed by Hollie Jackson – was your favorite?

Hollie is a great narrator. Again, I cant choose just one character, because they all stood out and thats a point in favor of Hollie: bringing t life such diverse point of views. The writing is top notch and so is the narration.

If you could take any character from Karma Inc. out to dinner, who would it be and why?

Read the book, listen to the audiobook, which ever format you choose, I promise you hours of pure entertainment.

This book was so funny that I found myself laughing out loud. This was a really fun book and kept my attention throughout. Hollie Jackson did an awesome job with the narration. I received this free copyaudio book at my request and have voluntarily left this review.

I have a new favorite!

This series has been so entertaining,sexy and so so much fun to listen too! It's literally like a great girlfriend over for a night of fun. I would listen to it all again.

Would you listen to Karma Inc. again? Why?

YES! it's funny and entertaining

I love the way Melanie weaves humour, sarcasm, romance, magic and paranormal together in a real life believable way ... I want all these characters to be REAL and live in my town

Which character – as performed by Hollie Jackson – was your favorite?

OMG ... I adore Hollie Jackson and how she reads ... all her characters are my favorites

Melanie's audio books should come with a warning ... don't try to eat while listening ... it's dangerous to laugh and chew food
I LOVED this book and will definitely be listening to more

Karma at its best!!

Where does Karma Inc. rank among all the audiobooks you’ve listened to so far?

At the top! The voices Hollie Jackson does is amazing and Melanie James does a fantastic job at writing!!

Another great addition to the series. I love the little help with KARMA! Cause some folks just need a good dose and are long overdue! This time its Kelly, Esmeralda, Gertie and Randy (I missed Leigh and Lindsey though) making trouble. But some new characters were added to the mix! And Kelly finds a hot man! And of course what could go wrong with dishing out a little Karma?

This book was great. It is a fun witty paranormal mystery. It has witches and werebears, imps, vampires, demons and so on. I particularly liked the character of the frog. He was hilarious. I really loved the section where karma was going to bite the butt of a fake author for plagiarism! I love how this author combines reality with fantasy and it all makes sense.

The author, Melanie James did an awesome job on this book. I laughed from beginning to and. it was very entertaining. The narrator, Holly Jackson delivered a flawless narration to us with authentic accents and the works. Well done both of you! This was so good, I read / listened to the entire book in 1 day.

I received this audio book as a gift from a contest I won.

Nice world building, nice twists, good collection of characters. Could have rated higher, but many of the jokes were a bit sophomoric.

Oh how I loved this book. It is a little bit different of a story about witches and all the trouble they can get into (and some of them are quite comical). This is a new series for me that I will definitely keep listening to.