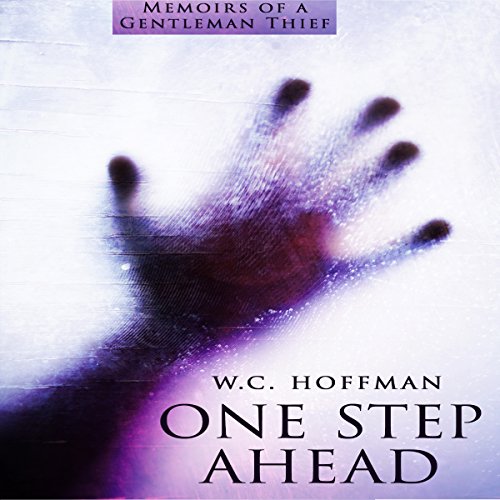 Fresh off the exposé of an organized crime syndicate, an award-winning investigative reporter lives in fear for his life. Relocating to Detroit under a new government issued identity, Nathan Davies finds himself dealing with the underbelly of American society once again.

America's most notorious thief, Zachary Landon, thrives upon the wealthy residents of the Motor City. Only targeting those who oppress the weak, Landon has become known as a modern day Robin of the Hood.

Davies quickly becomes enamored with the legend of Landon and soon his desire to learn more pushes aside the fear that has kept him alive. After a chance meeting, a bond begins to form and Nathan finds that Zachary Landon truly deserves to be glorified, not persecuted.

As truths are told, drawing Nathan in even further, he learns that when it comes to the gentleman thief, nothing is left to chance.

What listeners say about One Step Ahead

What did you like most about One Step Ahead?

Written as a series of shortish stories held together by a theme, this delightful book is perfect to pick up when reading time is limited Set in a period of earlier elegance and politeness, the 'Gentleman Thief' is that and more - in particular, suave and very clever. Think a combination of Raffles and Sherlock Holmes. The stories reflect this, being most unusual crimes solved (or initiated) by the man of the title.
The narration is excellent. Rich McVicar's voice is easy to listen to, beautifully modulated and perfectly fitting the subject matter.

I thoroughly enjoyed this book and am grateful to the publisher, author or narrator who sent me a complementary copy, via Audiobook Boom, in exchange for an honest review.

Another great book written by the author. Full of suspense and thrill. Narration is good too.

I received this audio book for free from the author, as a fan of his previous works, in exchange for an honest review.
I really enjoyed hearing this compendium of short stories. Landon is a "gentleman thief". If you're a fan of that tv show, Leverage, you'll understand the appeal. He only hits targets that deserve it, and usually only gets a fraction of a "normal" fee. He gets screwed over more often than not, and has a powerful ally/foe in his "childhood friend" the police inspector. This is well written, well narrated, and a perfect blend of ironic sarcasm and mind-blowing intuition. I can't wait for the next installment!

Fun story, looking forward to the next one

I really enjoyed this book. One of the main characters, Zachary Landon, really minded me of Sherlock Holmes - not that he was a detective (he was the thief), but in the way of his thought processes, and the way his mind worked. He is very observant, and sees things going on that most people would miss. He develops a bond with a reporter named Nathan Davies, and shares his insights with him. What I found odd, though, was that he is always guarded and doesn't seem to fully trust Davies, even though he has taken him into his confidence. I listened to the Audible audio version of this book narrated by Rich McVicar. I don't think I've ever listened to anything he's done before, but I was rather pleased with the narration and the different voices he gave to the characters. I would definitely check out more books that he has narrated. And the story itself was engrossing, and I am looking forward to the next book in the series.

everything about this book was great

Great thrills great book and great stories. narrator had a great voice I enjoyed every moment of the book. I received this book free for a honest review and unbiased option from the author and or narrator via audio book boom

This book was really cool. Love how the author took an older character and stories and modernized them. The book is full of twists and turns. Lots of fun within. Landon the thief is a genius and is a “good” thief. Highly recommend it.

Each chapter is a short story by itself.

One Step Ahead: Memoirs of a Gentlemen Thief by W.C. Hoffman. Narrated by Rich McVicar

The narrator was great. He is someone I would listen to again.

WC Hoffman is an interesting author to say the least. This book is so different from the other one we listened to. You can tell some authors have a formula they follow to tell a story or they write the same type of stories - not so with this author.

Each chapter is a short story by itself. Zachary Landon is not your typical thief. The stories he tells Nathan Davies about his adventures in crime are well thought out crimes. Listen to this book but make sure you listen to the second book too. The last chapter in the second book was my favorite.

I would say that the time spent listening to this book was time very well spent. I truly enjoyed the tales of Zachary Landon the Gentleman Thief. They were inspired and truly enjoyable. I laughed out loud at times at the conclusion of some of them when the confounded his nemesis.

What was one of the most memorable moments of One Step Ahead?

Detective Williams is at the ballgame with Davies using tickets given to Davies by Landon to see a baseball game between the Tigers and Red Sox. After the game all the players sign balls for them as they are sitting in box-seats behind the away team in the first base line. Walking out of the stadium Williams takes the Lords name in vain as every signature on his ball is Zachary Landon.

What does Rich McVicar bring to the story that you wouldn’t experience if you just read the book?

Mr McVicar brings a rich fullness to the characters. They become unique individuals in my minds that I can picture very clearly. He does an excellent job.

Do you think One Step Ahead needs a follow-up book? Why or why not?

I truly believe that One Step Ahead needs a follow up book because a man like Zachary Landon must have many more exploits that need to be shared with the world and a writer as talented as WC Hoffman needs to share more of Zachary Landon with us.

"This review copy audiobook was provided by the author free of charge via Audiobook Boom."

This book isn't the best but it's not completely horrible either. I think the narrator makes it better.

Stories of a Gentlemen Thief-Very Enjoyable

Very good narration of these well written short stories of a gentlemen thief. Would like to hear more of his work. I received this audiobook for free in exchange for an honest review.

I've recommended this story to many others. The story is a little old fashioned since it's set in the 1940's and the language is a little decorus and formal but the narration brings out the personalities which highlight the mystery, the humor and makes it enjoyable and move fast. The gentleman thief character is a fun puzzle to unravel and with the narration, you will enjoy him more and more as the story goes on.

Can't say enough how well the narration captures the nature and tone of this book.