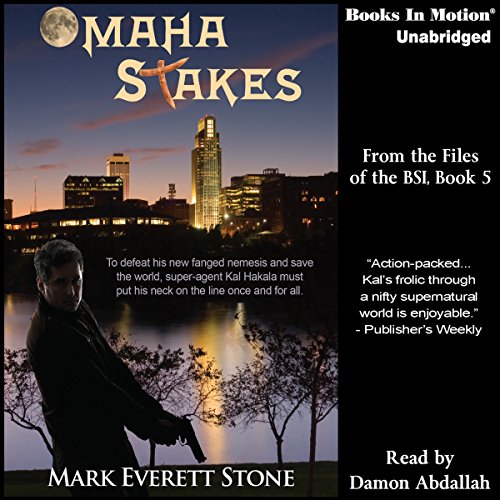 Agent Kal Hakala, who has been running the Bureau of Supernatural Investigation as its temporary director, has his hands full. First there was the windigo crisis that threatened humanity with extinction. Now he has received an anonymous challenge from a creature calling himself Maydock: "Come to Omaha within the next five days, or every day thereafter I shall kill 10 humans in many inventive and disturbing ways." Maydock has infiltrated BSI Security and can monitor Kal's every move, so until Ghost can repair the breach, Kal has no choice but to travel to the heartland with no team backup and only those items he can carry. While Kal dances to Maydock's tune, Canton and his team covertly follow as close as they dare, realizing that if they are caught, they will trigger Maydock's epic murder spree. Even as Kal is put through his paces, he uncovers corruption so insidious it tears at his fragile sanity. With the odds stacked so heavily against him, how can Kal possibly vanquish the most powerful being he has ever encountered?

What listeners say about Omaha Stakes

if you are English, Antipodean or travel, be ready for some seriously macerated words. This guy can't pronounce the word Maori or the name Montgomery (as in Field Marshall)! I enjoyed the story but the crass mispronunciation killed important sections for me.

If you could sum up Omaha Stakes in three words, what would they be?

couldn't pick one character, they are all brilliant

What does Damon Abdallah bring to the story that you wouldn’t experience if you had only read the book?

each character has its own voice. awesome narrater

About time Audible got this one out. This is one of my favorite UF series, I know everyone has different opinions, but I think this is up there with IDC series, maybe not quite Dresden ( all time best though). I find Kal funny and entertaining. The story line is a little strained, with the villain being the son of previous villains, but the pace and depth of the story more than makes up for any short comings. This is one you need to start at the beginning of series , not the 5th.