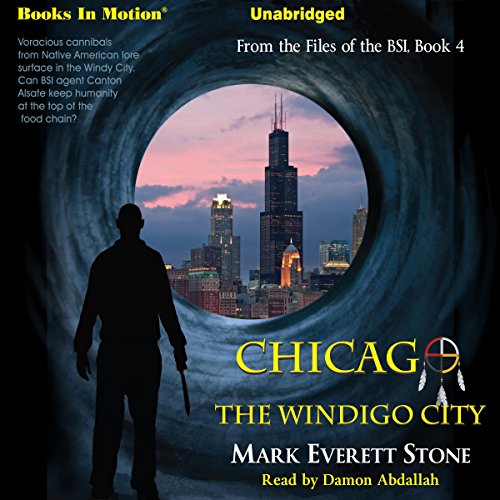 By: Mark Everett Stone
Narrated by: Damon Abdallah
Try for £0.00

Kal Hakala is the Bureau of Supernatural Investigation’s best agent, but even he needs a break after his last case, which brought him a hair’s breadth from death and killed the fiancée of his best friend, a Mescalero Apache agent named Canton Asate. Kal’s temporary desk-job is nothing less than leadership of the entire BSI. Now it is on his head to assemble teams of agents to fight the latest Supernatural incursions and man up if they fail. Windigo spirits in Chicago are possessing human beings and transforming them into ravenous cannibals. Canton is the natural choice for a team leader because of his knowledge of Native American lore. Is Canton, a legend with a knife, ready to strike again, so soon after his fiancée’s death? What about Kal’s own girlfriend, Jeanie? Can he stand to put her in danger and beyond his protection? Kal is forced to use the BSI’s cutting-edge virtual reality system to see what makes them both tick. Will the experience of virtually living their lives afford him the will to send those he loves into danger? Can an emotionally damaged man who has never led a team and a woman who traveled through time from the 1940s make the cut? For Kal, the choice isn’t easy, but for Canton and Jeanie, it could be deadly.

What listeners say about Chicago, The Windigo City

The story is passable, but it really takes a backseat to long flashback scenes on Hal's friends. They are really great flashbacks, but it does take something away from the story so I tagged it a star. No matter how cool the flashback scenes are and I enjoy learning about the characters it is no excuse to short change the main story.

It is still a really good book and worth a credit, but I have to be honest and point out the flaws. Also, it seems as though they may be transitioning Hal out of active field work and into a desk job. I don't know if the series will hold up as well in the future, although a Canton POV book would be pretty cool as well. I hope they find an archenemy for the group and start edging away from monster of the week stories.

Still worth a credit and curious to see what happens next.

Will he ever learn how to pronounce Sidhe?

Two books now almost ruined when the narrator can't be bothered to learn how to pronounce unfamiliar words. Sidhe, Mengele and ennui. Otherwise a good story, but hard to lose yourself in the story when you're flinching every few paragraphs.

Maybe I should just read the book next time.

I really enjoyed the way the story was told by different characters & swapped back and forward between the two. The fight scenes r awesome too lots of head stomping. Super cool series. Will listen to the next one too. ;))

More of a novella

This was much shorter than several other BSI books. It is another very good story focused more on Cantan and Jeanie, mixed with a windigo problem in Chi-town. Another great performance by DA coupled with a cool story, just wish there could have been a little more to it, was kinda short. Eagerly waiting for the next installment.