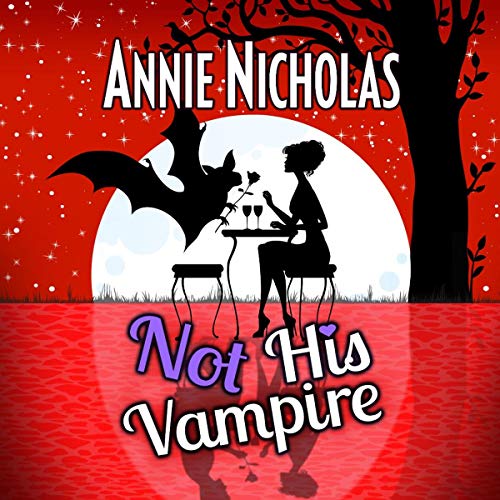 Not His Vampire: Vampire Romance

Magic is real. Shifters exist. Trixie Russell knows this. Everyone does. But no one told her about the monster lurking in the basement of the dragon’s castle. Not until it was too late.

Victor Petrov is ancient, and vampires his age should not lose control of their hunger. And yet that’s exactly the problem that landed him chained in a dragon’s dungeon. Then in walks a human female with cotton candy hair who smells like sunshine, her pulse a sweet melody in his parched ears, and the fragile thread of his control snaps. Again.

Like it or not, Trixie is now tied to Viktor's, and he seems short a few marbles. She plans on making his eternity a misery until he reveals they have an enemy in common. Trixie is totally on board with helping him escape so she could get her revenge. After that, she’s done. They’re over. She wouldn’t be his vampire.

What listeners say about Not His Vampire: Vampire Romance

Not this Series is funny and very enjoyable!!!.

I listened to this book a few months ago but now going though reviewing the books I enjoyed and this one is a big yes!!!

A great book when looking for a light and fun read

This is one of those books I like to throw in between heated stories I normally read,
Well, I have to be honest that I was lucky enough to snag a free audio copy of this book and OMG, it was so endearing and funny. The author writes of a paranormal world that blends with the human world and this time the humans know. Well, they know some things exist.
Trixie is a strong, funny character I could see being friends with. Her life is not easy but it definitely is entertaining. While on her job she accidentally meets Viktor Petrov a vampire being held n the local dragons castle. Yeah, I'm not going to explain that because that would be giving to much away and who wants to know everything before picking up the book. It ruins the fun.

Circumstances occur where Viktor and Trixie's lives cross over and with everything that happens, Trixie stands strong. This is a great change up for me and I have to say I was extremely entertained by the story and the characters. So much so that I think I'm going to have to continue this series. Trixie's sister story is next and you won't believe who she has to deal with. But before I do that I have to go back to the first book to find out their stories too!
So, if you're looking for something fun, entertaining and easy on the mind and heart, this series could just be it.

Poor Trixie needed to pick up the cat cages that her friend Betty lent a customer who adopted all of the rescue cats. The customer lived in a castle at the top of the hill, and also happened to be a dragon shifter. After arriving, she took a wrong turn and ended up in the basement, and encountered a man chained to the wall! She did not know that he was a dangerous vampire, and Victor was fascinated by this innocent pink haired animal control employee. The next time she came to the castle, a surprise encounter with a gargoyle changes her life!

This is another great read (or listen) in the Newport "Not This" series. The narrator does a great job telling the story with the different character's voices and personalities. We also get to visit the neighboring city of Riverbend, as Victor needs to find out and deal with a certain Black Magic book, and the dhampir who is using it. We also get to meet the Riverbend Wolf shifter pack and see a different side to the Alpha Chris, who had made an appearance in the previous book in this series. Definitely some twists to this story that keeps you guessing. Loved it!

This was my favorite story of the series, though to be honest, I liked and have read them all.

I won't go into details of the story to keep from spoiling it, but this is a sweet romance and HEA.

The narrator did a good job on Victor's voice and you can actually notice when Annie was talking which is a rare thing to happen with male readers.

I was given a code for this book for an honest review.

Enjoyed listening to this, the narrator (B.J. Harrison) did a great job, his Russian accent was awesome, I could listen to that accent all day! The story was entertaining, and this can be enjoyed as a stand-alone from the series, though there are references to incidents & characters from the previous books, but not hurting the enjoyment factor of this one.

The Not This series is one of my favorites. The storylines are a bit sweet with just enough bite (no pun intended) and wit to keep it real. Victor, a vampire with control issues, and Trixie, a sweetheart who's a genuinely nice, just turned vamp, have wonderful chemistry and their banter had me laughing thru most of the story. B.J. Harrison does a marvelous job with the voices. All in all, a must read/listen from me. Enjoy!

A wickedly witty vampire story. I loved Victor an old vampire whose blood lust is uncontrollable at times. When he meets Trixie he is smitten and when he turns her because she is dying he claims her as his own. His flirting with Trixie is adorable and he slowly breaks down her walls. He has a problem with one of the vampire nests and their lives will be put in danger but with unexpected help they may just make it out alive, well sorta, since they are vampires after all. I received a complimentary audio and this review is voluntary.

From the moment I started listening to this I absolutely loved the characters. Ruby is a little overbearing, I mean they are adults, after all, Trixie is an adult. But Ruby still treats her like a child. I get it, they are all they each have, but come on, she's a bit over the top about it. However, Trixie, on the other hand, won me over from the very first chapter. She's funny, she's witty, and she refuses to be cowed by a very very old Vampire. She's fantastic.

The narration was spot on. B.J. Harrison captured each character's personality perfectly. I found myself laughing aloud in the oddest of places in public, or smiling causing complete strangers I crossed while running errands to think I was smiling at them. It could not possibly have been done better.

The story moves at a great pace giving the listener time to really get invested in the characters and what their motivation is. I will definitely be keeping this one close by to give it a relisten now and again

Oh Wow, l just loved this story!
From the minute Trisha entered that dragon's castle courtyard it was a rollercoaster ride to the end. This is most definately one of my favourite "Not his" series stories. Totally recommend this whole series and wow, didn't B.J. Harrison do a great job with the narrations, totally nailed those vampire and dragon voices. l think l was WITH Trisha hiding behind Chris at one point there!

I love these books they have humor a little bit of sadness adventure & love & Also enjoy that there's not so much sex scenes bit more of a for play to lead up to Heated moment. Over all I enjoyed the book there narrator did a great job deathly will listened to all my books again before I order her next one!

Each book is great with adorable, plucky and strong female characters. I burst out laughing from some of the banter. If you want a light hearted and yet very interesting read please take up the series you won’t regret the credits.