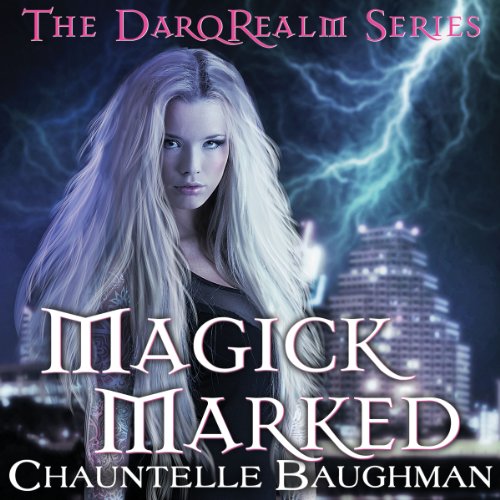 By: Chauntelle Baughman
Narrated by: Kelley Hazen
Try for £0.00

Forced into a world of ancient magick and fabled creatures, vampire Rhowen Vasile has been honored with the prestigious appointment of executioner - a promotion she never wanted.

Now she has two important responsibilities: execute criminal vampires and protect her race's Kamen, one of five ancient relics said to harness all magick in the DarqRealm.

When the Kamen Rho swore to protect goes missing, she's assigned the most important task of her life - join an interracial team with a magick mover, a werewolf, and a shape shifter to recover what's been lost. If she fails, the executioner will become the executed, and the magick held within the relics could be lost forever.

As other Kamens start to disappear and the teammates struggle to trust one another, Rho discovers a physical bond with a powerful magick mover that shouldn't be possible. With the survival of the entire DarqRealm compromised, she barely has time to deal with her temperamental teammates, much less a forbidden attraction. Rho and her team must put everything aside to find what they seek - before the enemy finds it first.

What listeners say about Magick Marked

Magick Marked grabbed me from the start and did not let go until the end, and I Love that in a story. There was a great mix of magic, paranormal creatures and romance. The characters were in depth and relatable and I am looking forward to see what happens to them in Book #2. Kelley Hazen is a phenomenal narrator who keeps me hanging on her every word. When she reads her characters each have a unique voice but are distinguishable and easy to understand. I would definitely purchase more books by both Author & Narrator. I received this free Audiobook at my request which did not influence my honest review.

Fun story. Not deep dark and heavy. But if you like a bit of mystery and urban fantasy, it's great. I was kept interested particularly as I really like the female heroine, Rho. She's an assassin and a protector of the DARK REALM. She's tough. Her relationship with her male interest is pretty kicking too. And everybody has a different cool super natural-ness. There are werewolves and vampires and shape shifters and witches every other kind of thing. Very spooky and fun! Good urgency too as the search for the hidden relics. I look forward to the next one.