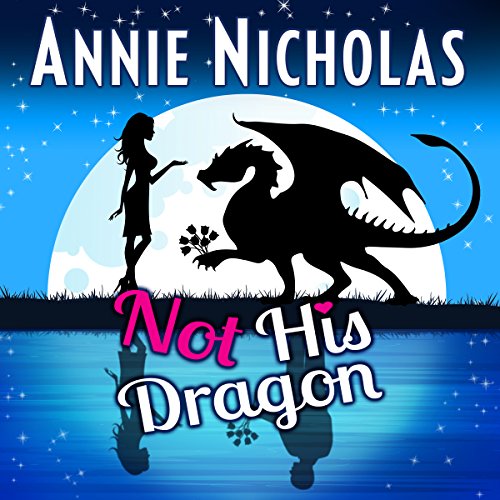 By: Annie Nicholas
Narrated by: Diane Lehman
Try for £0.00

Eoin Grant hasn't encountered a female of his race in decades, and this crazy person's scent declares her unmated. Fate set her in his path, and he won't let this opportunity slip through his claws. No matter how wary she is of him. After all, how many chances does a dragon have at finding love? But fate can be a crueler mistress than his perfect mate. Of all things, she thinks she's human.

Business is taking off for Angie Weldon. She put her freakishly sharp nails to good use when she opened her back-scratching spa in downtown New Porter City. The local shifter community pounced on her skills, and she's knee-deep in shed fur. By the end of the year, if lucky, she could afford to move out of her crappy apartment.

Dollar signs flash before Angie's eyes when a dark, brooding stranger books her solid for a week, but she notices the possessive fury in his glare. She's been around enough shifters to know the look, and she won't go down that road again. Angie is literally swept off her feet by the intense shifter, and he wants more from her than she's willing to give. She figures it's best to avoid eye contact and back away slowly. Until he changes her life by insisting she's a dragon.

What listeners say about Not His Dragon

Angie took no crap and I loved it! Even Ian had to mind his manners! 😂

Hard to finish. Felt a bit dull and predictable

Overall: I felt this book ambled on at a slow pace with not enough plot to interest me to want to carry on with it. I think it was supposed to be slightly comic but the humour fell flat for me and didn't add to my enjoyment.

Plot: The plot for this was highly predictable and lacked depth. Evil villain gets in the way of budding love? Meh.

Characters: All the characters felt two dimensional and I couldn't get invested in what happened to any of them. The villain was nothing more than just evil. No explanation of why he was evil - no depth of character. No character arc or development. The peripheral characters were uninteresting, little more than cardboard cut outs and there was no B plot at all.

Romance: The chemistry between the main characters wasn't there for me. It felt like we were 'told' these two had chemistry without being 'shown it'.

This might appeal to people who are looking for a relaxing undemanding paranormal romance that doesn't demand much of the reader. If you're looking for depth and excitement, there are better books out there.

I would but it wouldn't be my first choice as a recommendation. The narrator seemed to read/portray the dialogue differently than I had interpreted it when originally reading the book.

Not my favorite performance. The book itself is great but the way the narrator portrayed the main character was a bit too annoying for me and I had to take frequent breaks when it got to be too much.

I highly enjoyed the story itself and would recommend reading the book instead over listening to it.

Love this book. It has a different take on a reality that has shifters of all types including dragons that live openly with humans. Angie is great as a girl who just needs a break and Eion as a rather grumpy dragon. Diane Lehman does a good job with the voices and personalities of the characters

Wow this is a great story, l enjoyed every second! I just love dragon's, don't you? This book has it all, love, mystery, humour, a witch, magic, dragons, wolves, even a vampire cameo appearance, suspense and a great story. The narrator was outstanding and really bought the differing characteristics to life.
Looking forward to more in this series.
Recommended❣💜💕

Love Not my Dragon!

Really enjoyed Not my Dragon storyline as well as The narration of the story. The story was not your typical find mate,fall in love the end. The main female character is Angie who seems to have rotten luck in life. I think the worst part is not really knowing her past and the mystery of the non human side of Angie. Ian is one of my favorite dragons. His character is one of many emotions.

A fun story with a clumsy heroine and a cranky dragon. When Angie finds out she is a dragon she is confused because she has never shifted. Then she meets cranky dragon shifter Eion who frightens her she reacts with anger. But little do they know they are made for each other but other male dragons are sniffing her out. Angie and Eoin must make her shift before someone tries to steal her. I received a complimentary audio and this review is voluntary.

Great Narrating! This story, Not His Dragon, is the first in Annie Nicholas’ series and she does a phenomenal job creating a world of shifters who feel like they could be our neighbors. That is if our neighbors were dragons, werewolves, and a variety of other creatures.

I am not usually a ‘listener’ to books, but must praise Diane Lehman for her creative voices that move the story beyond a retelling, into a performance.

Really enjoyed getting to meeting Angie and Eoin and watch their relationship blossom.

The funny, quirky nuances were voiced in a fashion that made the storyline even more enjoyable. Looking forward to ‘listening’ to the next book in the series, Not His Werewolf!

it got a little cheesy but a good listen. Very cute with a good mystery, that had curious enough to finish bin one sitting

I enjoyed it. I wish there was more.

I want to know more!! It feels incomplete with the story ending without knowing her past when the author spends so much time on it. I did enjoy the story though and thought the narrator did a fine job.

I enjoyed both these "Not His" books and loved them so much I went to her website and found out she has 3 more! I can't wait for them to come to audible!

I loved this audio book

I read or listen a lot and was finding it hard to find something to keep my interest. This was refreshingly funny with a side of serious. I 😍 🥰 loved it. The narrators were great 👍 made the book better. Ann P