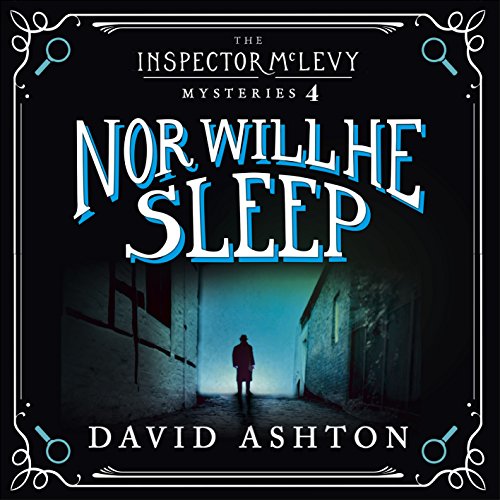 Nor Will He Sleep

London had Sherlock Holmes. The dark alleys of Edinburgh had Inspector McLevy.

Known as the father of forensics and a likely influence on Sir Arthur Conan Doyle, real-life police inspector James McLevy is here reinvented by David Ashton in a thrilling mystery - the fourth in a series - set in dark, violent Victorian Edinburgh.

It's 1887. The streets of Edinburgh seethe with anarchy as two gangs of students rival each other in wild exploits. After a pitched battle between them, an old woman is found savagely battered to death in Leith Harbour. Enter the Thieftaker - Inspector James McLevy. With Constable Mulholland at his side, he scours the low dives of the waterfront and then sees the tendrils of the case spread to more respectable nooks and crannies.

When the inspector encounters Robert Louis Stevenson, author of The Strange Case of Dr Jekyll and Mr Hyde, in the city to bury his deceased father, the two recognise each other as fellow travellers, observers of the dark side of human nature, and hopeless insomniacs.

Glimpses of the murderer indicate a slender, androgynous figure with a silver cane, which is used to lethal effect. A dancing killer not unlike Mr Edward Hyde.

What listeners say about Nor Will He Sleep

such slow narration .totally ruined it

I love the David Ashton radio 4 plays with Brian Cox but he has ruined this book for me by reading it himself. He ought to stick to writing. The narration is so important and his snail's pace delivery was irritating and tedious. It might well be a good story if read by an actor but I wouldn't recommend it. Listen to the sample first at any rate....well at a slow rate!!!

Nor Will He Sleep

Where does Nor Will He Sleep rank among all the audiobooks you’ve listened to so far?

A very good story full of atmosphere.
But the narration is ponderous and becomes a little irritating over time.

However it is a rattling good yarn

I tried but after the first 5 chapters I reluctantly gave up., partly because the story if there was one bored me silly along with the droning interpretation of the narrator and author Mr Ashton.
I'm sorry this is such a downbeat review and it is the first one that I have not liked although I am also having trouble with another series which if that doesn.t improve will also be getting an adverse review from me

Another great tale from David Ashton

Loved this story, lots of twists and turns. performance by Ashton is superb, although maybe an acquired taste for some people as it is much more of a one man show than a reading of the book.

An excellent addition to the series

McLevy reveals a bit more of himself in each episode. The use of well known personalities to set off the plot is nicely done and has led more than once to further research. I know some listeners have problems with the narration, they take me back to radio dramas of my childhood and I love it.