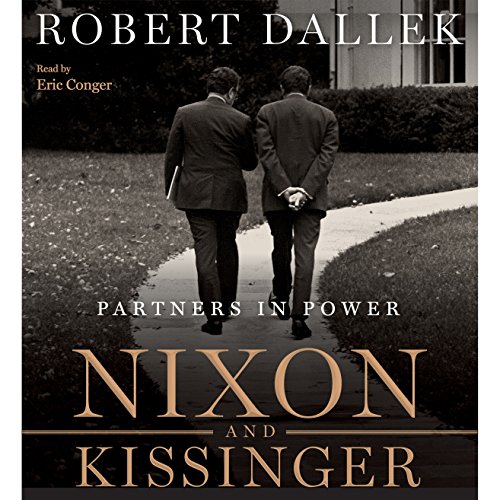 By: Robert Dallek
Narrated by: Eric Conger
Try for £0.00

More than 30 years after working side by side in the White House, Richard Nixon and Henry Kissinger still stand as two of the most compelling, contradictory, and powerful American leaders of the second half of the 20th century. Both were largely self-made men, brimming with ambition, driven by their own inner demons, and often ruthless in pursuit of their goals. From January 1969 to August 1974, their collaboration and rivalry resulted in the making of foreign policy that would leave a defining mark on the Nixon presidency.

Tapping into a wealth of recently declassified documents and tapes, Robert Dallek uncovers fascinating details about Nixon and Kissinger's tumultuous personal relationship and the extent to which they struggled to outdo each other in the quest for foreign policy achievements. With unprecedented detail, Dallek reveals Nixon's erratic behavior during Watergate and the extent to which Kissinger was complicit in trying to help Nixon use national security to prevent his impeachment or resignation.

"Bestselling author Dallek...delivers what will quickly become recognized as a classic of modern history." ( Publishers Weekly)

What listeners say about Nixon and Kissinger

WARNING: not the unabridged version

What would have made Nixon and Kissinger better?

I have a hard copy of this book, and this audio download categorically is not the unabridged version. It misses entire chunks out on areas such as the Middle East and SALT I negotiations. Be aware in case you choose to purchase it.

There is still more to tell about the Nixon years

Even after all the books, articles and other historical accounts of the Nixon white house, I never knew about the power struggle Nixon and Kissinger had with each other. Surprising view of how and why he and Kissinger handled affairs in Vietnam, China, and Russia the way they did.

This audiobook is abridged.

This audiobook is abridged. 11 hours would not cover this entire book. I am only giving this a low rating because the selection is not as advertised.

What would have made Nixon and Kissinger better?

Providing the full text, or at least making it clear that the audio version has been abridged.

A very strange question for this particular book, though the narrative does give some sympathetic insights into the "characters" of Nixon and Kissinger.

Which character – as performed by Eric Conger – was your favorite?

Same as above--again, a strange question that I am apparently forced to answer by this review system.

If you could play editor, what scene or scenes would you have cut from Nixon and Kissinger?

Apparently someone has already cut a great deal out of the audio version, so it's hard to tell what more one might excise.

This book was very disappointing. I was expecting an in-depth discussion on foreign policy; how it is formulated, implemented and strategies used. What I got was an in-depth look at the flawed characters of Nixon and Kissinger. The book spent more time on their flaws and paranoia than on any of their foreign policy accomplishments and failures.

Warning: this audible version is NOT "unabridged"

Would you try another book from Robert Dallek and/or Eric Conger?

very inteesing, well written but s biast that is hard to distinguish the facts from his political views.

The author clearly suffered through thousands of hours of tapes, and puts the listener through much of the same.