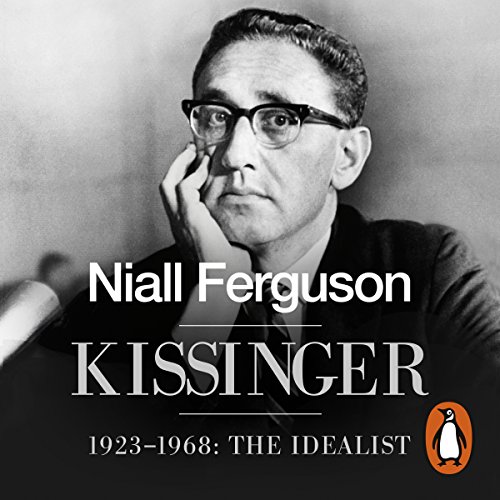 By: Niall Ferguson
Narrated by: Roy McMillan
Try for £0.00

Penguin presents the audiobook edition of Kissinger: The Idealist by Niall Ferguson, read by Roy McMillan.

No American statesman has been as revered and as reviled as Henry Kissinger. Hailed by some as the 'indispensable man' whose advice has been sought by every president from John F. Kennedy to George W. Bush, Kissinger has also attracted immense hostility from critics who have cast him as an amoral Machiavellian - the ultimate cold-blooded 'realist'.

In this remarkable new book, the first of two volumes, Niall Ferguson has created an extraordinary panorama of Kissinger's world and a paradigm-shifting reappraisal of the man. Only through knowledge of Kissinger's early life (as a Jew in Hitler's Germany, a poor immigrant in New York, a GI at the Battle of the Bulge, an interrogator of Nazis and a student of history at Harvard) can we understand his debt to the philosophy of idealism. And only by tracing his rise, fall and revival as an adviser to Kennedy, Nelson Rockefeller and, finally, Richard Nixon can we appreciate the magnitude of his contribution to the theory of diplomacy, grand strategy and nuclear deterrence.

Drawing not only on Kissinger's hitherto closed private papers but also on documents from more than 100 archives around the world, this biography is Niall Ferguson's masterpiece. Like his classic two-volume history The House of Rothschild, Kissinger sheds dazzling new light on an entire era.

"Riveting...this will be his masterpiece." (Andrew Roberts, The New York Times)
"For big, bold and compelling, it is impossible to ignore Kissinger." (John Bew, New Statesman - 'Books of the Year')
"This is a superb history of the modern world as well as a biography of Kissinger...a tour de force." (William Shawcross, The Times)

What listeners say about Kissinger

You think Dr henry kissinger is bad but he is main author of international relations of 20th century.

Much more than an autobiography.

This book is a triumph.
The way Niall Ferguson explains Kissingers rise to National security adviser while imparting the important political circumstances that shaped history is engrossing and enlightening and as usual brilliantly narrated by Roy McMillan.
Highly recommend!

Brilliantly researched, organized, & narrated. Truly informative and highly enjoyable. Please keep this narrator or Malcolm Hillgartner for the next volumes!

Often times, even the most impartial historian has the tendency to depict events and people in order to support their own views.
This does not happen in this outstanding work by Niall Ferguson. The author successfully tries to be a fly in the wall, observing and telling what happened throughout these first 45 years of Kissinger's life. All this by a remarkable research from unclassified documents to personal correspondence of Kissinger and other statesmen.
The cherry on the cake is the narration, with Roy McMillan superbly impersonating the voices of Kissinger and others.