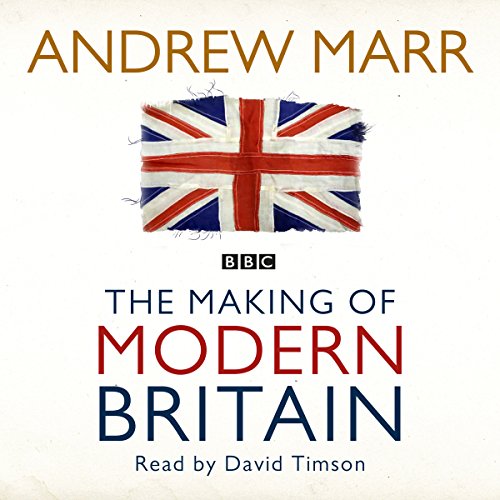 The Making of Modern Britain

By: Andrew Marr
Narrated by: David Timson
Try for £0.00

In The Making of Modern Britain, Andrew Marr paints a fascinating portrait of life in Britain during the first half of the 20th century as the country recovered from the grand wreckage of the British Empire.

Between the death of Queen Victoria and the end of the Second World War, the nation was shaken by war and peace. The two wars were the worst we had ever known and the episodes of peace among the most turbulent and surprising. As the political forum moved from Edwardian smoking rooms to an increasingly democratic Westminster, the people of Britain experimented with extreme ideas as they struggled to answer the question 'how should we live?' Socialism? Fascism? Feminism?

Meanwhile, fads such as eugenics, vegetarianism and nudism were gripping the nation, and the popularity of the music hall soared. It was also a time that witnessed the birth of the media as we know it today and the beginnings of the welfare state.

Beyond trenches, flappers and Spitfires, this is a story of strange cults and economic madness, of revolutionaries and heroic inventors, sexual experiments and raucous stage heroines. From organic food to drugs, nightclubs and celebrities to package holidays, crooked bankers to sleazy politicians, the echoes of today's Britain ring from almost every chapter.

What listeners say about The Making of Modern Britain

If you could sum up The Making of Modern Britain in three words, what would they be?

This is a wonderful detailed but quick paced look at the making of Modern Britain. The gradual change of the British and the events that sparked them.

Which character – as performed by David Timson – was your favourite?

Winston Churchill plays a massive role throughout most of this book, appearing at various points and you can hear him in the quotes.

It's not emotional. Just interesting.

This is a really well put together book. Has lots of facts but never dull. It covers subjects in enough detail and the way the book links all the major points in British history is very smart. I learnt a lot. This is like the best ever history lesson. Very very well read also. Shall move onto the other book from the War until present day.

Performance is very easy to follow. Energetic but not exaggerated.

I loved the fact that it's not a "history for dummies" kind of book. It goes beyond politics and wars (though it includes them off course) to try and describe the british society as a whole during that period.

Great book and narrative. The narrator was easy to listen to and the book is informative and interesting.

I really enjoyed listening to this audiobook. I would recommend it for anybody who is interested in a this time period

great book. highly informative and well read. however, the editing could be better. for example, the breaks between words tend to be longer than the breaks between chapters so you often don't even notice one had ended until you twig the no-sequiturs

listened to it whilst on holiday so will 're listen as I would close my eyes, immerse myself in the story and smooth voice then realised that is missed half hour here and there with a nap

I listen on my walk into and out of work and its good but the narrator is so very quite I have to turn my sound all the way up and even then if the traffic is bad I cannot hear them.

Where does The Making of Modern Britain rank among all the audiobooks you’ve listened to so far?

One of the best. And will be relistened to over and over

What other book might you compare The Making of Modern Britain to, and why?

The History of Modern Britain by same author, which deals with the after war years.

Very clear and easy to listen to.

I did laugh at parts of this book, but also made me take a deep look at our Country's history

Great book. Would suggest listening to this before The History of Britain

A good introduction to help understanding who we are and where we've come from, and what has transpired to help shape the Britain we know today.