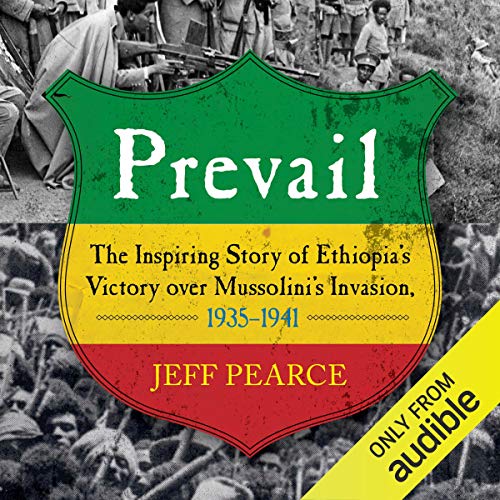 It was the war that changed everything, and yet it's been mostly forgotten: in 1935, Italy invaded Ethiopia. It dominated newspaper headlines and newsreels. It inspired mass marches in Harlem, a play on Broadway, and independence movements in Africa. As the British Navy sailed into the Mediterranean for a white-knuckle showdown with Italian ships, riots broke out in major cities all over the United States. Italian planes dropped poison gas on Ethiopian troops, bombed Red Cross hospitals, and committed atrocities that were never deemed worthy of a war crimes tribunal. But unlike the many other depressing tales of Africa that crowd book shelves, this is a gripping thriller, a rousing tale of real-life heroism in which the Ethiopians come back from near destruction and win. Tunneling through archive records, tracking down survivors still alive today, and uncovering never-before-seen photos, Jeff Pearce recreates a remarkable era and reveals astonishing new findings. He shows how the British Foreign Office abandoned the Ethiopians to their fate, while Franklin Roosevelt had an ambitious peace plan that could have changed the course of world history had Chamberlain not blocked him with his policy on Ethiopia. And Pearce shows how modern propaganda techniques, the post-war African world, and modern peace movements all were influenced by this crucial conflict a war in Africa that truly changed the world.

What listeners say about Prevail

This was a truly insightful piece of work!
Very enjoyable and well worth a listen!

As a young Ethiopian, I honestly say I wasn’t educated about this important history except the few tv programs that are shown around the celebration of victory of Adewa and some local books about our heroes. This book really give me a piece of Ethiopians history and the history behind the known and unknown heroes and figures I hear about. Answered my questions about how Haile Selassie went to England when patriots are fighting, how he returned, how he managed to rally people/countries behind him, and many more. Thank you for the writer.
Amazing book! and I do recommend it for all.

This is not a history, it's a package of anecdotes

Would you ever listen to anything by Jeff Pearce and Richard Pankhurst (foreword) again?

Absolutely not! Only a small percentage of this book actually tells the story of the Italo-Ethiopian war. The lion's share of the book is a collection of totally irrelevant stories that should never have been included. For example, the book not only meanders to talk about a French entertainer's comments on the war but also her "exploits" during World War 2. This was irrelevant and should not have been mentioned. The book does this over and over and over with irrelevant person after person, to the exclusion of real content.With the VERY LITTLE TIME the book does spend on the actual conflict and war itself is poisoned by this style. There is little to no explanation of what happened, merely quotations meant to show individual drama related to the events. While some of this adds to a military history, the book has so little meat, so little exposition - so little real information, that none of this means anything. It's not history, but a gushy, meandering mess. Terrible!

If you could play editor, what scene or scenes would you have cut from Prevail?

Very nearly everything, the book introduces so little content about it's titular topic.

In lightning and heart warming as well as convicting. There is so much for us to learn from this great nation and the errors of the leaders of the world. I hope we have learned our lesson. I fear we have not.

As an Ethiopian American, I value the global appeal this story has to fill in often neglected rise of global African diaspora consciousness at that particular time. Jeff pulls together an incredible amount of information to tell a story which has equal value today as it did almost more than 80 years ago. Thank you!

we control our destiny.

This Book reminds me again History is made in battle ground with blood, tears, and sweat not on social media. As we are always known for, we control our destiny and write our own history. Here we are again on a crossroad, Ethiopia prevail we have always a potential to COME BACK and CONTROL our DESTINY. Great book Jeff. God bless Ethiopia

It’s amazing how this really redefines WW2 for me significantly. Such an understudied war and period in Africa. All the precursors of the Horrors of war can be found playing out before the Allied nation would realize the same suffering years later. Ethiopia just became an even more amazing place.

Very broad and inclusive. The only thing is the audio reader couldn’t pronounce Ethiopian names and places correctly. I am from Ethiopia and most of the time I didn’t understand people’s names and place from the audio. The reader should put enough effort to rehearse the names.