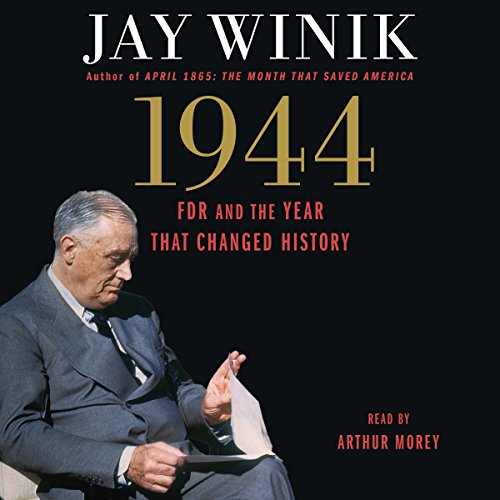 New York Times best-selling author Jay Winik brings to life in gripping detail the year 1944, which determined the outcome of World War II and put more pressure than any other on an ailing yet determined President Roosevelt.

It was not inevitable that World War II would end as it did or that it would even end well. Nineteen forty-four was a year that could have stymied the Allies and cemented Hitler's waning power. Instead it saved those democracies - but with a fateful cost. Now, in a superbly told story, Jay Winik, the acclaimed author of April 1865 and The Great Upheaval, captures the epic images and extraordinary history as never before.

1944 witnessed a series of titanic events: FDR at the pinnacle of his wartime leadership as well as his reelection, the planning of Operation Overlord with Churchill and Stalin, the unprecedented D-Day invasion, the liberation of Paris and the horrific Battle of the Bulge, and the tumultuous conferences that finally shaped the coming peace. But on the way, millions of more lives were still at stake as President Roosevelt was exposed to mounting evidence of the most grotesque crime in history, the Final Solution. Just as the Allies were landing in Normandy, the Nazis were accelerating the killing of millions of European Jews.

Winik shows how escalating pressures fell on an all but dying Roosevelt, whose rapidly deteriorating health was a closely guarded secret. Here then, as with D-Day, was a momentous decision for the president. Was winning the war the best way to rescue the Jews? Was a rescue even possible? Or would it get in the way of defeating Hitler? In a year when even the most audacious undertakings were within the world's reach, including the liberation of Europe, one challenge - saving Europe's Jews - seemed to remain beyond Roosevelt's grasp.

What listeners say about 1944

Interesting to listen to with some nice side story's. Focuses mainly on the (lack of) rescue efforts of the Jews.

Not wishing to minimize the senseless atrocities perpetrated by ISIS, but they are amateurs compared to the Nazis. Winik, with unrestrained detail chronicles the years of moral depravity of the German and Nazi people toward all who did not fit their definition of correctness. What lessons can we learn from history in closing our response to the evils of genocide? The US has and is guilty. Winik, without specifically proclaiming it, would call a halt to isolation from our moral responsibility to the value of human life. Winik's seamless weaving of so many threads of our recent history into a cohesive, illuminated picture is revelatory. I am so much better informed than I was even having personally lived through the entire epoch. Born in 1930 I was too involved in personal naval gazing to ever perceiving of a personal responsibility to be involved in attempting to effect change--for which I repent. Read the book and ask what your response should be--you may be surprised.

I believe that Jay Winik is attempting to claim that FDR failed the Jews or at least could have done more to save them from the Holocaust. Winik claims that FDR chose inaction time after time about stopping Hitler’s Final Solution. Winik thought that FDR could have rallied the country in his fire side chats and that he could have dealt with the anti-Semitism in his own cabinet. Winik does spend time discussing FDR’s health in 1944. Winik claims FDR missed his own “Emancipation Proclamation Moment” by not stopping the holocaust. Winik also provides a review of the history of World War II.

The story is interesting but in my opinion Winik has failed to make his case. I do agree the United States could have done more to save the Jews. We could have taken in more refugees, earlier but by 1944 it was too late. I think that FDR and Churchill decided that winning the War as fast as possible was the best approach and in 1944 they may have been correct. According to Winik the British government took the early claims about the concentration camp seriously whereas, he claims the U.S. government buried the reports.
Winik does discuss the “War Refugee Board” operated by the Treasury Department; it is credited with rescuing more than 200,000 Jews from the Holocaust. Winik uses the board’s success to show that FDR could have done more.

The book is well written and researched and Winik is a great storyteller. The book is an interesting read for those interested in the subject but it does not live up to its title. I picked up some great trivia information to add to my collection. Arthur Morey does a good job narrating the book. The book is fairly long at just over 21 hours.

A True Story: Part of My History

If you are my age (83) or nearby, this reading will bring back more than you ever could have remembered otherwise. This story, this reading ( which was very well done) recalled my playing in front of my house when Mom opened the screen door and called her children in, "you better come in now," she calmly said, in that firm 'and I mean business' voice only a Mom can have. From that moment it was green stamps, 'stir your sugar hard, we can stand the noise' ... and a different way of life for the years to come.

Winik presents an engrossing telling of the political events of WWII during 1944, focusing on Franklin Roosevelt and his influence on world history. The book carefully includes extensive background information to help the reader understand what led to those events. Somber. Heartbreaking. Franklin Roosevelt's primary aim was to win the war. Although he perhaps had the power to save millions of victims of the Holocaust, that wasn't his focus. The detailed descriptions of the Nazi concentration camps is heartbreaking. There are many lines in this book that can be directly applied to events happening in our world today. It is important that we know history so we don't repeat it. Well written. Well read. Makes the boring history of WW II that we learned In school not only interesting, but relevant to our world today.

Rarely am I so moved by a book as I am by Winik's 1944. I have no problem putting 1944 in the same category as Agent Garbo, The Forgotten 500, Lost In Shangrila, The Band of Brothers and Unbroken.

Winik never strays far from the events of 1944, yet seems to anticipate when the reader needs a quick detour into a short biographical sketch of a new character or a reminder of past developments that led to his current topic. Along the way, he digs into the soul of leading figures so that we sense the character and flaws of FDR and feel the anguish of Jews who escaped from the camps as they try to convince the clueless world of the size and scope of Hitler's final solution.

There were moments when I had to take a break from the painstaking detail of this portrayal of the rise of the death camps and of the willful blindness of State Department officials toward the plight of Europe's Jews.

Finally, the narration was excellent. Just the right measure of compassion and consistency for such sobering subject matter. Without giving it away, the final question of the book is ringing in my ears.

This book covers a lot more than 1944 & FDR’s role in the events of that year. It jumps forward and backwards constantly and is more a book about the Holocaust than anything else. FDR factors into perhaps 10% overall. It’s not a bad book...just a very misleading title.

I don't know whether it was the narrator or the story, or both, but I was fascinated with every sentence. Every sentence, with it's vivid descriptions and the back and forth accounts between the enormous strain on FDR and the events of the Holocaust, made me want to keep listening.

A compelling study conclusively showing that the Jewish people can rely on no one other than themselves to survive in this world. This is why there must always be an Israel, so that when again anti-Semitism knows no restraint, the Jewish people will always have somewhere to go to so that the horrors of the Holocaust can never be repeated.

And this book makes clear over and again that while FDR was a great man, he was flawed in that the saving of millions of lives meant nothing to him if it might mean the loss of a single vote. At virtually every turn FDR turned a blind eye to the plight of the Jews although it would have taken very little on his part to save so many. Unfortunately, the conclusion is inescapable that FDR was anti-Semitic, albeit his was of a softer kind, not shown by way of overt action, but through quiet inaction. So while it is true that FDR had Jewish friends -- Justice Felix Frankfurter, Secretary of the Treasury Henry Morganthau, Rabbi Stephen Wise -- he was no friend of the Jewish people, with the consequences numbering in the millions.

I think Jay Winik is a great author and a great historian. He makes the stories interesting and compelling. Very easy to listen to. I also enjoy the narrator Arthur Morey. I have already listened to the entire book twice over the last several weeks.

A Tragic Sin of Omission and Lost Opportunities

Mr. Winik has crafted another spellbinding telling of a critical period in the history of the world. World War II was raging and while the Allies focused upon the conventional definition of war, another war against the defenseless was being persecuted against the Jews. This second war, the product of a sick culture, was coming to light to the civilized world with minimal actions. This was the true sin of the 20th century and Mr. Winik does a wonderful job of being together the history leading up to the events, the actions of the time and the failure to act against this crime. This was not the story I expected but one that will live with me. You won't finish the book feeling good but hopefully it will make you think more about what we could and should be doing today.