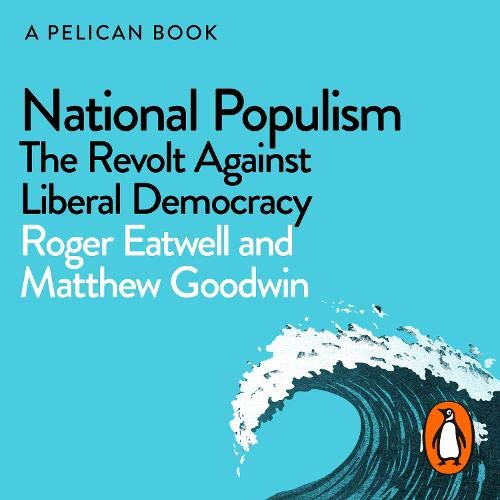 Penguin presents the audiobook edition of National Populism: The Revolt Against Liberal Democracy, a Pelican Book, written by Roger Eatwell and Matthew Goodwin and read by Matthew Goodwin.

A crucial new guide to one of the most urgent political phenomena of our time: the rise of national populism.

Across the West, there is a rising tide of people who feel excluded, alienated from mainstream politics and increasingly hostile towards minorities, immigrants and neoliberal economics. Many of these voters are turning to national populist movements, which have begun to change the face of Western liberal democracy, from the United States to France, Austria to the UK.

This radical turn, we are told, is a last howl of rage from an aging electorate on the verge of extinction. Their leaders are fascistic and their politics antidemocratic, their existence a sideshow to liberal democracy.

But this version of events, as Roger Eatwell and Matthew Goodwin show, could not be further from the truth.

Written by two of the foremost experts on fascism and the rise of national populism, this lucid and deeply researched audiobook is a vital guide to our transformed political landscape. Challenging conventional wisdoms, Eatwell and Goodwin make a compelling case for serious, respectful engagement with the supporters and ideas of national populism - not least because it is a tide that won't be stemmed anytime soon.

What listeners say about National Populism

Don't shoot the messenger. We need to listen.

If you are on the left, you need to listen to this. This book was written 14 months ago but reads like it was written after the December election. You may not like what he's saying but he has been proven right (so far). If people of the left bury their head in the sand and refuse to engage on topics like immigration then only people on the right will do so and that risks only widening the gulf that has split our country.

Eatwell and Goodwin have some words of comfort. National populism in 2020 is not the racist, homophobic, sexist and jingoistic tribe of your nightmares. The opinion polls show Britain is much more accepting and welcoming than it ever has been. However, to ensure the brand of national populism that gains a foothold in the political landscape is one you can live with you must not stay on the sidelines.

"(Trumps) views are a far cry from fascist racism"

Trump started his campaign with a slur against Mexicans. He is a racist and these authors are apologists for him. They try to differentiate between fascism and national populism by pointing out differences, neglecting to point out that there are a great many more similarities. Not everything they say is wrong, but their determination to obfuscate the obvious racism that is bound up within modern populist movements like the National Front in France, or AfD in Germany means that the sensible points surrounding why these movements are popular are lost.

As with a large number of great books narrated by their authors, the performance didn’t match the writing.
The text of the book was really well written. Conversational in style, witty, thoughtful and at times ironically playful. The narrative deftly stepped through a highly emotive landscape, armed with carefully researched evidence and a comprehensive structure that managed to properly explain its point without unduly repeating itself or showing bias.
I feel now that I finally understand the full argument - and the reason for - the rise of popularism, and why so many people are drifting away from their core loyalties to try something else. It’s like somebody turned on the light.
But I really struggled with Matthew’s reading. It wasn’t exactly monotone, but every statement was delivered with the same declarative cadence and intonation, creating an almost mechanical repetition that made all these well-written words merge into each other. The book is densely packed with information, but I often found my attention wandering, meaning I had to rewind and try again. I think I’ve rewound this book more than any other from several hundred titles in my library.
I’m really struggling to reconcile the fact that somebody who writes with such a deft and intelligent touch can deliver their own words in a way that makes it sound like they’ve not comprehended what they’re reading.

Incisive, well argued and much needed exposition of the underlying reasons for the revolt against liberal democratic governments. Worth reading, whoever you vote for.

very good and very interesting but it's true that Matthew Goodwin deserves a better narrator than Matthew Goodwin, nevertheless I managed to get through the whole book and absorb the info. Populism is here to stay, this book will tell you why.

Very interesting and thought provoking content, but the reader is quite monotone. Still worth listening do but I found myself phasing out quite often.

Brilliant dissemination of the current political trends. Lots of statistics which are useful and an insight as to how populism evolved

The content of this book is fascinating, but the narrator's repetitive delivery made listening a struggle

A sobering analysis of the social issues that dealign social democratic parties with their traditional electorate.

I stuck through the poor narration at first as it started off well, with a strong critique of liberal democracy. However, the same level of critique wasn't applied to national populism. Perhaps it is later in the book, but you have to wade through quite a lot of racism to get there and I just couldn't stomach it, so given I didn't feel like I was learning anything new, I bailed.
I think perhaps the authors (like much of the public) don't really understand what racism is, and think it's just a liberal conspiracy. They would probably think that me complaining about the book's racism is "playing the race card" (a term used in the book, unbelievably).
It's a shame, as it seemed really promising.

This book provides a well-balanced, non-judgmental view of national populism. It is well researched and draws from a variety national populist movements over the last thirty years. Anyone interested in better understanding current political currents should read.

The book read like an ok graduate thesis. Very repetitive. The author keeps saying the same thing in every chapter. Seems that he is saying the obvious. The book offers little if any examination of the differences between national populist movements in Europe at the moment. Worst of all is the extremely boring amd monotonous reading.