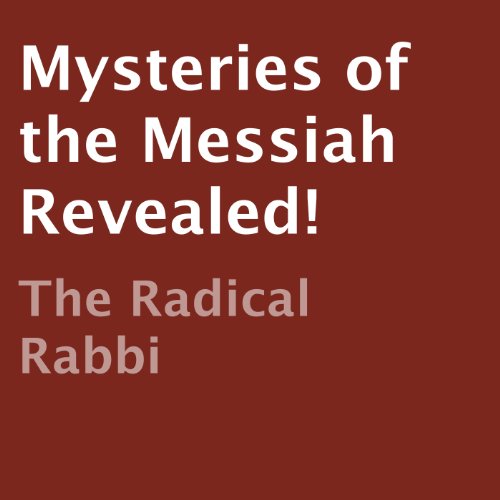 Mysteries of the Messiah Revealed!

The late Rabbi Kaduri predicted the Messiah would come after the death of Ariel Sharon, a former Prime Minister of Israel. Sharon had a stroke in 2006 and entered a coma soon after the Kaduri prediction. After seven plus years in a coma, his death now appears to be imminent, could it be the coming of the Messiah is also at hand?

I report, you decide, as you read the "Prophecies of the Messiah Revealed."

Read the book and then take the "MESSIAH TEST" to see how you score in your knowledge of the Messiah.

"Are you radical enough to read this?" asks "The Radical Rabbi."

What listeners say about Mysteries of the Messiah Revealed!

Ok, I really, really, enjoyed this audio book. It was very easy to listen to and the Radical Rabbi spoke clearly, which is not always the case with some Rabbis.

Although this is only a short audio book, that is because there is no waffle whatsoever. Whether or not you agree with the Radical Rabbi's conclusions is immaterial. He proposes a very believable thesis, and although I disagree with only one element of his argument: It is up to each Listener to look at either the Old Testament or Tanah, also Romans 3:23 (New Testament) and judge for themselves.

Have paper and pen to hand for the quiz and email addy at the end. Enjoy :)