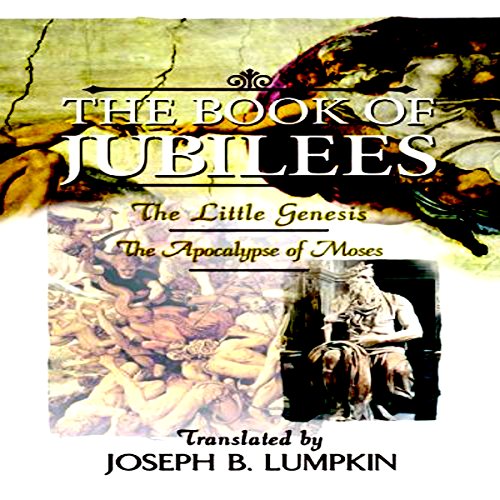 The Book of Jubilees: The Little Genesis, The Apocalypse of Moses

By: Joseph B. Lumpkin
Narrated by: Dennis Logan
Try for £0.00

The Book of Jubilees, also known as The Little Genesis and The Apocalypse of Moses, opens with an extraordinary claim of authorship. It is attributed to the very hand of Moses; penned while he was on Mount Sinai, as an angel of God dictated to him regarding those events that transpired from the beginning of the world.

The story is written from the viewpoint of the angel. The angelic monologue takes place after the exodus of the children of Israel out of Egypt. The setting is atop Mount Sinai, where Moses was summoned by God. The text then unfolds as the angel reveals heaven's viewpoint of history.

We are lead through the creation of man, Adam's fall from grace, the union of fallen angels and earthly women, the birth of demonic offspring, the cleansing of the earth by flood, and the astonishing claim that man's very nature was somehow changed, bringing about a man with less sinful qualities than his antediluvian counterpart.

The story goes on to fill in many details in Israel's history, ending at the point in time when the narrative itself takes place, after the exodus. As a side note, the angelic dictation attempts to answer the question of how part of the Pentateuch was written by Moses after it records his death.

What listeners say about The Book of Jubilees: The Little Genesis, The Apocalypse of Moses

Seek all wisdom in the name of Jesus, ask for discernment and understanding in the spirit. This book is a great reference to a deeper understanding of the word of God.

Loved it! So much I had never been taught. Now I can understand the old testament better.

I received a review copy of this audiobook.

Lumpkin provides a valuable introduction to this apocryphal book. He provides less in the way of helpful commentary than some of his other volumes.

The book itself essentially tells the combined stories of Genesis & Exodus from the perspective of an angel revealing them to Moses, occasionally explaining away details that are inconvenient or embarrassing to faithful Israelites.

What can I say, I loved the book. It’s reading the book of genesis in detailed. Loved it!!

This writing ties in very well with the stories told in the bible. It provides context of what is perceived to be the backdrop of the untold - omitted from the bible. It also provides a clearer understanding of some of the context of the bible.