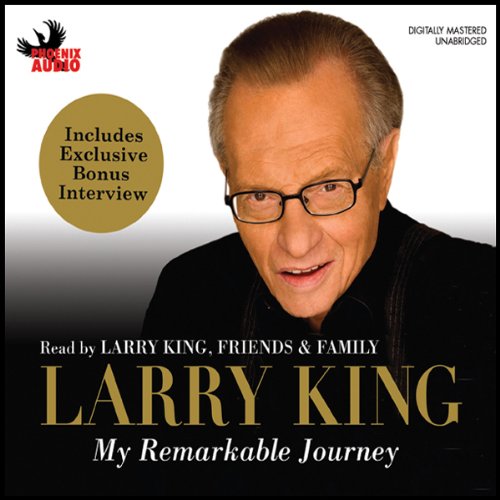 Here is the definitive autobiography of one of the most famous personalities in television history - an intimate, revealing, and riveting memoir that will show a Larry King the world has never known, up close and personal.

For a half-century, the world's most influential figures have been telling their story to Larry King. Now the man in suspenders shares his inspiring story, from his humble roots in Depression-era Brooklyn to the heights of celebrity as host of CNN's Larry King Live.

Before he befriended presidents and iconic entertainers, Larry grew up on the streets of Brooklyn, where he was known to friends as "Zeke the Greek the Mouthpiece" because he never stopped talking. Larry delves deeply into his extraordinary personal odyssey, beginning with the loss of his father at age nine. He has lost jobs, had a three-pack-a-day smoking habit, been down to his last $2 when he won an $8,000 trifecta at the racetrack, had a heart attack and quintuple bypass surgery, quit smoking, and now, at the age of 75, has recently been thrown out of a Little League game for arguing a call in defense of his nine-year-old son.

Filled with delightfully evocative personal anecdotes and behind-the-scenes observations on some of our most important world figures, My Remarkable Journey will be devoured by Larry King's millions of fans worldwide.

"The most remarkable talk-show host on TV ever." ( TV Guide)

What listeners say about My Remarkable Journey

What a voice! What a life!

RIP to the legend. Great voice and stories. 40,000 interviews and he was just warming up.

Well, there's no-one like Larry! Just a unique talent with a refreshing perspective. Wish I'd met him. May he Rest in Peace.

love it, would recommend!

one of the most engaging books I've listened to so far. I hope Larry lives to atleast 127 years.

What a superb listen 'my remarkable journey' turns out to be. Starting through from childhood to quadruple heart bypass operations, Larry King captivates in a totally relaxed yet riveting style. Star names are dropped like confetti throughout and I couldn't recommend this book highly enough!!

What am I doing here?

This is the modern US history told by someone who’s seen it from the first row. Larry is an excellent storyteller. I’m “studying him” to ask better questions. I think the most important lesson from the book for me was: “Listen. I’ve never learnt anything when I was talking.”

Also includes a lot of history, from O.J. to former Presidents. And an interesting family life.

I have been a larry king fan for a long time. I always wanted to ask him what being Larry King was like, you know interview him. Well this book answers most if not all of my questions. Fun to read great to hear him do the talking but why would it not be? He is funny and enjoys it that's why everyone likes him and hangs out with him. Its why he knows everyone and everyone knows him.Its got to be coo to be Larry King. Great stories too. just a fun book that everybody should read and enjoy. By the way great touch having his friends and family read with him It makes the book even more complete.

Larrys a treasure. And wow! what a story teller. This is the kind of book that'll leave u thinking and laughing. And the best part is you can pick it up whenever. No need to be fully invested..

What a story! more folks should write stories like this, biographies of 'neighborhood' friends. Recent generations don't have the same kind of 'friends' or neighborhoods...and our recollections are clouded by 'reality' tv and electronic enhancements!

Larry King's latest book is chock full of the fascinating and personal anecdotes, adventures, and stories that accompany him from childhood to the present day and include a varied cast of family, schoolfriends, colleagues and celebrities along his journey. Alternatingly hilarious and heart-wrenching, there is plenty of food for thought here. Yet what puts this audiobook in a class of its own is King's delivery: It never once sounds like it is read, but is instead told in a natural, spontaneous voice that makes the listener feel he or she has just pulled up a chair for a long chat with an old friend. The icing on this cake is the interspersed commentary from family and friends. King also answers frequently-asked questions from his viewers. All of these features make this one of the most entertaining and enjoyable audiobooks I have ever listened to.

Larry is a good story teller and was a terrific interviewer! All the people he’s talked to and the times he witnessed pure history talking place is remarkable! His wife and a few other people also talk. Over all I really enjoyed it!

very interesting and funny book from larry king with himself as the narrator along with family and friends.

He met and learned from many interesting people and shares it with the listener.

Great book. What's better than having Larry King himself read you a book that he wrote!! The lifelong lessons, humor, and humbleness in this book are really priceless. You may agree or disagree with Mr. King on so many issues and opinions in the book, but you will always appreciate his point of view and honesty.

The funniest audiobook I've ever heard

Not only did the audio provide some precious insights about life, it turned out to be extremely funny! I have more than a hundred audio books in my library, this one is definitely the best! A must for anybody who thinks and talks!