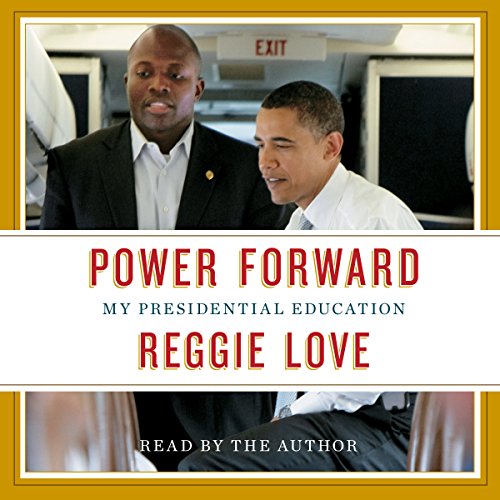 Every path to adulthood is strewn with missteps, epiphanies, and hard-earned lessons. Only Reggie Love's, however, went through the White House by way of Duke University's Cameron Indoor Stadium. Mentored by both Coach Krzyzewski and President Obama, Love shares universal insights learned in unique circumstances, an education in how sports, politics, and life can define who you are, what you believe in, and what it takes to make a difference.

Power Forward tells the story of the five years Love worked as a personal assistant to Senator Obama as a candidate for president, and President Obama, and it is a professional coming of age story like no other. What the public knows was well put by Time magazine in 2008: "[Love's] official duties don't come close to capturing Reggie's close bond with Obama, who plays a role that is part boss and part big brother." What the public doesn't know are the innumerable private moments during which that bond was forged and the President mentored a malleable young man. Accountability and serving with pride and honor were learned during unsought moments: from co-coaching grade school girls basketball with the president; lending Obama his tie ahead of a presidential debate; managing a personal life when no hour is truly his own; being tasked with getting the candidate up in the morning on time for long days of campaigning.

What listeners say about Power Forward

Yes, the behind the scenes insight was fun. This book has is a unique production. Really enjoyed the few instances where Love offered some insight into an Obama exchange which led to an excerpt from a speech the current President made. That alone was worth the 6 hr listen.

The behind the scenes with Obama although I was expecting more to be included. The book is about 65% Obama relationship and 35% Love's life. Be prepared and you won't be disappointed.

Did Reggie Love do a good job differentiating all the characters? How?

The content was decent but after an hour and a half of listening I was ready to take a break from the narration.

At times it was difficult to follow the timeline of events. The story was told in chronological order; however, it broke from the timeline periodically.

Love spoke too much about his childhood basketball experience.

He's certainly an interesting man with a unique story. This book is worth your time.

Reggie Takes It Inside...

...for a true look on the journey of a lifetime. It's fun to peek over his shoulder in the fun and grueling hard work of being POTUS' Body Man. I always appreciate it when an author "Audibles" his own story. I was so captivated that I listened to it all in less than 24 hours. Smooth Slam Dunk Reggie. I enjoyed it.

This book should be on the must read list for high school students as they make their way into the world of adulthood. It is also a wonderful reminder to people of all ages the difference they can make with a few attitude adjustments. The book is funny, insightful and endearing. Reggie’s respect and admiration for everyone he meets from the everyday joe to the president shows through.

Interesting & Good Memoir! Very nice time hear the author read his Story. Loved to hear info of our President during his bid for Office.

IT WAS VERY EASY TO LISTEN TO THE AUTHOR'S JOURNEY.
I WISH THIS BOOK WAS REQUIRED READING IN SCHOOLS
EXCELLENT !

Must read for all aides, bodyguards and like minded

As a personal aide myself, I’ve found this book to be excellent from start to finish! So many valuable nuggets to uncover as Reggie talks about his victories and losses both personally and professionally working with President Obama. I believe all aides, bodyguards, armor bearers and like minded persons should pay special attention to this book! We need more books like this.

One of the best books about the Obama campaign

Reggie Love was not politically ambitious. He kind of fell into the job at Senator Obama’s office. Then had to be talked into working as the Body Man during the campaign, and then had to be talked into following him to the White House as his Personal Assistant. This gives his story a down to earth quality that is very appealing. He intersperses his experiences with Obama with those of his days as a college athlete and the coaching he received there.

Both the writing and the narration are engaging and well done. An especially nice touch is that audio includes two excepts of Obama speeches with Reggie providing the reader with insight into the hours directly before those speeches.

Overall the book provides some amazing insights into the both the hard work of the campaign, and the character of who Reggie often refers to as “The Candidate”.

Personally there was a bit too many sports metaphors and discussions about basketball for my taste, but overall I found it quite interesting and very well done.

A wonderful and inspiring set of candid stories. The peek into the Obama White House is very cool but even more compelling is the honest telling of mistakes made, lessons learned, and obstacles overcome.

Can’t tell if I like the guy or not

There are several good stories, but the author comes across as a sh**head. He was a Washington aide, so maybe that explains half of it....

Have a young person in your life listen to this!

I have two older teen sons. They both listened to it and loved it! Very insightful and lots of great life lessons here (not the least of which might be the &quot;folly of tattoos&quot; -thank you, Mrs. Obama!). Seriously, this book really can speak to young people finding their ways out there. Give it a try.