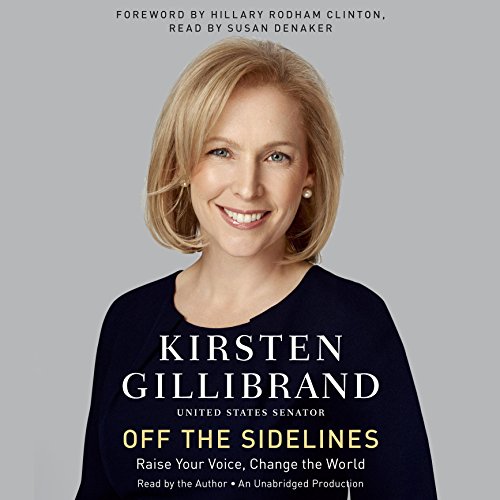 Fourteen years before Kirsten Gillibrand succeeded Hillary Rodham Clinton as senator from New York, she heard her future mentor say these life-changing words: "Decisions are being made every day in Washington, and if you are not part of those decisions, you might not like what they decide, and you’ll have no one to blame but yourself." A young corporate lawyer at the time, Gillibrand felt as if she’d been struck by lightning. She instantly knew that her voice - all women’s voices - were essential to shaping the future of this country, and that she had a greater purpose in life: to speak up and effect change. Now, in this extraordinary memoir, the senator, wife, and mother of two recounts her personal journey in public service and galvanizes women to reach beyond their busy lives and make a meaningful difference in the world around them.

Off the Sidelines is a playbook for women who want to step up, whether in Congress or the boardroom or the local PTA. If women were fully represented in politics, Gillibrand says, national priorities would shift to issues that directly impact them: affordable daycare, paid family medical leave, and equal pay. Pulling back the curtain on Beltway politics, she speaks candidly about her legislative successes (securing federally funded medical care for 9/11 first responders, repealing Don't Ask, Don't Tell) and her crushing disappointments (failing by five votes to pass a bill protecting survivors of sexual assault in the military).

Gillibrand also shares stories of growing up the daughter and granddaughter of two trailblazing feminists in a politically active family in Albany, New York, and retraces her nonlinear path to public office. In Off the Sidelines, Gillibrand is the tough-love older sister and cheerleader every woman needs. In her sharp, honest, and refreshingly relatable voice, she dares us all to tap into our inner strength, find personal fulfillment, and speak up for what we believe in.

“Senator Kirsten Gillibrand, in offering this compellingly personal account of her journey to the U.S. Senate, fulfills a vital public purpose. Writing in a voice that is honest, funny, blunt, and strong, she urges women to get off the sidelines and start changing the world." (Sheryl Sandberg, COO of Facebook and founder of LeanIn.Org)
"What do you get when a woman is the third generation of fierce, kindhearted, and brilliant political activists? You get Senator Kirsten Gillibrand, who writes irresistibly, helps in real-life terms, and uses her clout to get more women elected. Off the Sidelines is one of the most helpful, readable, down-to-earth, and truly democratic books ever to come out of the halls of power." (Gloria Steinem)
"Kirsten Gillibrand has written a handbook for the next generation of women to redefine their role in our world. With Off the Sidelines, Gillibrand shows that it’s not about getting to the top, or choosing between career and family - it’s simply about getting involved." (Arianna Huffington, editor in chief of The Huffington Post and author of Thrive.

What listeners say about Off the Sidelines

This book is about mobilizing women (and men) to get off the sidelines and become active in effecting beneficial change in society. The author is challenging women to become involved in changing society toward benefitting women. Gillibrand said men learned this lesson a long time ago. In so many words change will not happen until more women become active in all areas of government. Gillibrand says politics is one big way to change the country and we need to put more women in position to make change. Gillibrand said generally women work to get bills passed and are more willing to focus on the goal and not let petty party politics get in the way of the greater good. The author said her fellow female Senators are more willing to reach across the aisle to achieve goals and more willing to compromise. Gillibrand describes her fight to get 9/11 first responder health insurance passed and the fight to repeal Don’t Ask Don’t Tell. She goes on to say there are many areas that work is need on such as workplace discrimination, access to child care, equal rights, sexual discrimination and abuse in the military and on college campuses and many many more. The author says politics is a means for advocacy for her causes. In many ways this is a book with an ethical message.

Gillibrand provides a memoir of her life up to writing the book to illustrate what triggered her to get off the side lines and become an advocate for change in her community. She first was elected to Congress from the 20th district in New York. When Hillary Clinton left the Senate to run for president Gillibrand was appointed to Clinton’s place in the Senate. Edward Kennedy was the senior senator from New York and Gillibrand worked with him on the Don’t Ask Don’t Tell repeal. When Kennedy died Warren was elected to his Senate Chair. She discuss the distaste she has of comments made about women’s clothes, hair style, weight and so on whether they are running for office, giving a speech or in the business board room. These types of comments are not made about the men. Gillibrand tell what it was like to be pregnant when she was a congresswomen and having young children while working in the Senate.

Over all I found the book interesting and I do hope that it will motivate young girls to think of a career in politics, or the career areas of government such as the State, Treasury, Justice Department or other such areas. Gillibrand recommends everyone become active in their local community government. Some will want to advance to state and federal government or other related organization to advocate for their causes. I noted that Gillibrand and many of the politicians are attorneys therefore, that appears to be a good professional path to positions of leadership and government jobs. I wish Gillibrand had provided some suggestion of courses to take or professions that would help provide the needed skills and tools to be an effective politician.

I had recently read the biography of Chief Justice Lorna Lockwood of the Arizona Supreme Court and had noted she encouraged women attorneys to advance themselves to various judgeships. Lockwood said women need to advance themselves in their profession and to help the young women coming up in the profession. Lockwood said more women in all areas of professions, business, not for profit organizations and government would bring about a more balanced world. Susan Denaker did a good job narration the book.

I found it easy to listen to, and relatable. enjoyed learning her values and passion.

Kirsten started out a bit slow for me but as soon as she started talking about the issues she's passionate about I was taken by her passion, kindness and her hard-working nature. If you think more women should be in office, and find equal pay and justice for rape victims a top priority, you will like listening to Kirsten.

if you're looking for an in-depth treatise on Senator Gillibrand's policy positions, you'll be disappointed. Instead, she tells the real story of her path to leadership, from her motivations to how she juggles a public position with her family life.

Sometimes it feels a bit tedious - I personally don't care about how she shares clothes with friends - but on reflection she weaves an important story of the power of networks, friendship, ambition, and personal prioritization. It is genuine and well-written.

It is endearing in the end, though I was glad when it was finished.

She has my vote!

Greatly enjoyed the book -- think it was especially good in audible format. If I have the opportunity, I will definitely vote for KG.