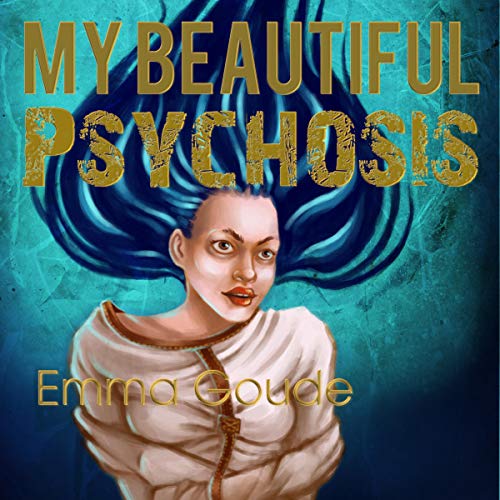 My Beautiful Psychosis is a stunning debut memoir from international award winning documentary filmmaker, Emma Goude. It is a gritty tale of transformation, depicting from the inside some of the most powerful experiences a human mind can endure.

What if psychosis is really a wake up call?

Emma is a 20-something who likes to party and take drugs...until she decides to give them up...and that’s when the insomnia starts. After five nights without sleep she ends up in A&E.

Three questions determine whether she is sane or not.

Three questions stand between her and the psychiatric ward.

She gets them wrong.

Emma is an atheist, a skeptical cynic who chose dope over God, so when she has some spiritual experiences she is not entirely sure if she is delusional. The psychiatric system has forgotten that "psyche" means soul. All they know about is medication and they have ways of making her take it. It becomes a game she has to play in order to get out. It is also a perception of herself she must do battle with in order to stand strong in her belief that her psychosis is some kind of awakening.

This powerful, honest and lucid memoir turns on its head the idea that psychosis is a debilitating illness, caused by a brain chemical imbalance, which requires medication for life. My Beautiful Psychosis questions conventional methods of "treating" psychosis and points towards a radical vision where "diagnosis" of mental illness makes allowances for spiritual growth rather than simply treating a perceived chemical imbalance.

My Beautiful Psychosis is a heart wrenching true story. Raw and vulnerable, spiritual but funny, it will change the way you see psychosis.

“I was taken by her authenticity and vulnerability.” (Phil Borges, director of Crazywise)

"A guiding light for individuals, loved ones and healthcare providers." (Emma Bragdon, PhD. Executive Director, Integrative Mental Health for You)

What listeners say about My Beautiful Psychosis: Making Sense of Madness

Showing the way to a paradigm shift in mental health care

I started listening to this book yesterday and finished it today. I’m so moved by it. It’s written beautifully. (Although the first chapter was my least favourite, I then felt it landed on a whole different level of writing which was maintained with skilful ease throughout the rest of the book, so I really encourage everyone to listen/read it fully.)
Emma writes with such honest, direct seeing and sharing, which makes it so refreshing to listen to, as does her voice which lets her remarkable story speak for itself, without adding unnecessary dramatic effect. The effect is very transparent and generous, a kind of “here’s my story, take it or leave it”. I found it very, very inspiring, a massive achievement on so many levels.
I feel the positive, powerful impact this book will keep having as its ripples widen out, touching and soothing so many who have had similar experiences, and changing the way we see and relate to those going through similar experiences. It is a call for compassion, for ourselves and others, and a guide book for how that compassion can look.

So great to hear this book & gain more understanding. As a mother of a very young adult going through the first year journey following psychosis it has helped me understand more of what I witnessed. Thank you for having the courage to share your experience to help others.

As a connoisseur of great comedy, I hadn’t planned on using audible again after signing up to listen to ‘Alan Partridge from the Oasthouse’. I was recommended Emma’s first book, ‘My Beautiful Psychosis’ and as the audible version was narrated by Emma herself, I reactivated my account to have a listen. I literally ‘laughed out loud’ at least once, every chapter (way more than I did listening to partridge). ‘My Beautiful Psychosis’ is absolutely hilarious, and of the grown-up, emotionally-intelligent variety. I really was so taken aback by the unexpected humour of the book that I *couldn’t* stop listening and I devoured the first six hours in a single day.

When I finished the book just two days later I felt a profound sense that Emma’s book is the beginning of an emerging literary star, and somebody who has found a way to make the kind of impact Paulo Cohello made yet bigger and better. Unlike Cohello, Emma’s story isn’t told through fictional characters, it’s her *own* narrative and she *owns it* herself, whilst still having the impact on her listener of having been told a wonderful fictional story. That is what makes Emma’s story truly groundbreaking; as Emma has, by owning her narrative as her own true story, taken the best components of narrative fiction very similar to Cohello’s, but taken it to a whole new level. *And* without losing any of the magic for the listener of complete immersion in a wonderful (and at times very beautiful) story.

This is a rare and highly valuable book which deserves to be a huge, huge success for Emma.

I loved this book. Emma Goude writes and narrates so well, it's a really easy listen I didnt want it to end! Mental health memoirs are often a depressing or hard read, but Emma's book is inspiring, funny, challenging, honest and captivating. I felt right there with her. It brought me tears as well as smiles, and a real education into the experience of those being treated by mental health servcies. I hope I can be a better support to friends and family with what we label as 'mental health issues' having read this book.

I went through psychosis from mental illness and had a wonderful spiritual awakening. learned a lot about who I am. was looking fwd to this story. It was so boring I couldn't get past chapter 2.