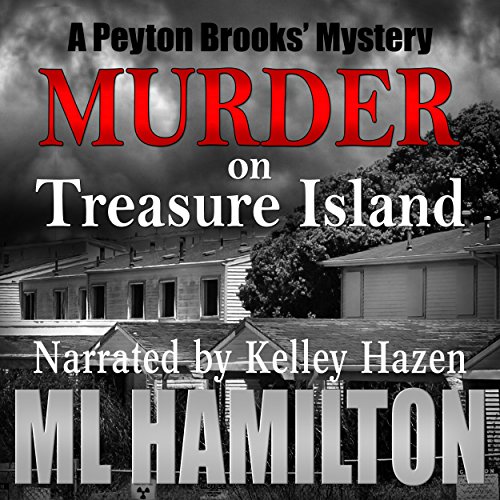 For months, Peyton and her partner, Marco, have been searching for the serial killer known only as the Janitor, but every investigation ends in defeat. He moves like the wind, striking and disappearing without a trace, leaving no evidence behind.

Peyton, herself, fell victim to his attack. Now she struggles to focus on her job when her every moment is filled with nightmares of him.

Forced to deny her trauma in order to stop him, Peyton fears this case is destined to end a hail of bullets and blood. She's just not sure whose.

What listeners say about Murder on Treasure Island

I often hear people mention binge watching their favourite series. Well, this is a book series that I can absolutely binge listen to! If you are new to the Peyton Brooks series, you should start from the beginning. The characters grow and develop fantastically through the books. And this book marks the end of Peyton Brooks in her initial role and the start of whatever is next. A big case that teased and tortured the homicide team for most of the series comes to a dramatic conclusion too.

I really enjoy ML Hamilton's writing. She commits completely to her characters and she makes it so easy for her readers and audience to do the same. She handles their issues and challenges with sensitivity. Each character is unique, lovable and remarkably quirky. As for Kelley Hazen, she does not narrate the books in the series; She performs them. She gives each character their own unique voice that reflects their personality.

I cannot express how much I have enjoyed the series so far. This book is the perfect bow at the end of this part of the series. I am so looking forward to the characters' onward journey!

FANTASTIC END TO THE SERIES

Couldn't ask for a better end to this deep and twisting series. All the players &amp; storylines are accounted for. Great surprises. Very satisfying.

I was voluntarily provided this free review copy audiobook by the narrator and it was awesome. It was suspenseful and dramatic as Peyton and Marco get closer to the serial killer they have been searching for. It is the perfect conclusion to this series, and yet leaves you wanting to start the next series right away. If this is first book you've listened to in the series, you'll want to go back to the beginning once you meet the characters. Looking forward to the next series.

This was a kill end to a very engaging series. What a wide array of characters. There is something for everyone here. Fun and funny, obnoxious, sympathetic, hero and heroine along with all the bad guys you could possibly look for. Narration is solid. This author just keep s getting stronger. I'm going to start the FBI series.

I've been waiting a long time for this last installment and it was worth it. I couldn't stop listening. I'm really sad it's over - I got very involved with these characters. Thank you ML Hamilton. What a great journey - every single book.

Murder on Treasure Island (Peyton Brooks' Mystery #7) was a great read by M.L. Hamilton. Peyton and her partner, Marco, have been searching for the serial killer, the Janitor, for months. Every investigation they do leads to defeat. The Janitor strikes and then disappears without a trace, and he never leaves any evidence. Peyton fell victim to his attract and now has a hard time focusing on her job due to nightmares of him. I have loved reading this series and cant wait to read more. I love the depth and life that Kelley Hazen brings to the characters.

What an epic conclusion to the Peyton Brooks Mysteries! The Janitor is still out there... what will it take for the SFPD to bring him down?

There’s action, adventure, humor, heartbreak, and lots of drama. Such a satisfying end to the series. Well done ML Hamilton!

I always love Kelley Hazen’s performances. She flawlessly moves between the characters bringing out each of their personalities. I just close my eyes and it’s like watching a movie in my head.

My favourite detective couple is back in the seventh installment of Peyton Brooks' Mysteries - and what a wonderful closure to the series it is...:)

As with all the books in the series, the emotional side of the story is as important as the criminal plot. Even more so here as the private lives of Peyton's and Marco's intertwine with the case they are on... and it's a race against time as everyone knows if they don't catch him, the Janitor won't stop killing, and he's already killed too many people. The problem is, Payton suffers from PTSD, and she can't trust herself... Will she be able to overcome her trauma and act when necessary? And will Marco be able to cope with her nightmares waking them up every single night? And is what they have real or the result of their traumatic experience of Peyton almost dying last time Janitor acted against them? These are the questions that we pose while listening to the story...
The plot is fast; there are unexpected things happening, leads going astray, the need to close the case getting more and more urgent, and the emotional ups and downs make the tension almost unbearable... and yet there are times when you just won't be able to stop yourself from laughing:) The banter between Jake and Marco brought a smile to my face more than once, the picture of Maria advising Tag on how to be more feminine was just precious and the betting poll at the precinct became the proverbial frosting on the cake...:)

But the best thing about the book? When we finally get to the end, it's not the end at all, but the beginning of a new adventure both for Peyton and Marco. And that's what made my day:)

Narration by Ms Hazen is fantastic, as usual. Although I still think some of the voices are a bit unnatural, with so many different characters to read she's done an excellent job (and also, throughout the series I probably just got used to how all of the characters sound, so none of the voices bothered me much any more...:)).

The story idea seemed interesting but by the second sentence I was done. When a male character is talking the narration is so low it is hard to hear. I tried turning the volume up but then the female character sounds like she is YELLING . I hung on for a couple chapters but the story was also slow. I had to quit. Awful!

I listened to Portero Hill which was slow to start, but eventually got there. This "TI", I'm in chaptert 4 and all it has conveyed is "chick flick". No story. No plot. Shallow characters. Terrible narration. If icould, I'd ask for my money back. Treasure Island does NOT work for me.