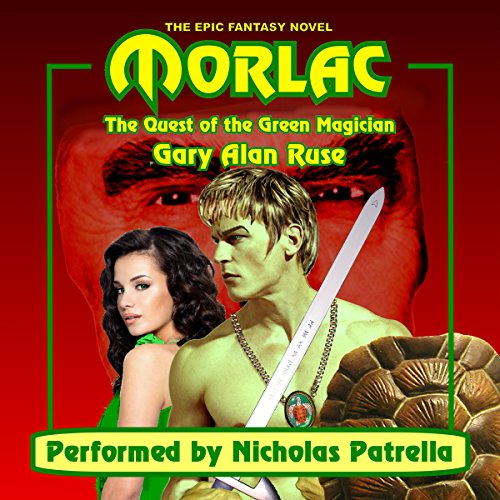 By: Gary Alan Ruse
Narrated by: Nicholas Patrella
Try for £0.00

Conjured from the sea by the dark magic of the Green Magician to defend their village from invaders, Morlac is a being tormented by his own dual past, and under the spell of the wizard's wicked daughter. Can he save them all...and himself? His journey across exotic lands, armed with his magicked sword Shark and his shell shield, is an epic sword and sorcery adventure. Tormented by conflicting memories, Morlac is at war against his own nature as much as the multitude of enemies he faces in his homeland and beyond. Searching for his own identity as well as for the sorcerer who abandoned him, Morlac encounters new friends, dangerous enemies, many exotic lands and supernatural terrors. Morlac is involved in a romantic triangle with the Green Magician's daughter, Kadrana, as beautiful as she is dangerous, and Glendauna, a young woman Morlac later meets, who is a Durkesh Warrior with a dark secret of her own. Morlac is a highly original novel with plenty of action, humor, and romance.

What listeners say about Morlac

Would you listen to Morlac again? Why?

Yes. The characters are interesting. They way they are formed and what this means in the story makes me want to revisit them again. I liked them and the story. It was enjoyable.

What was one of the most memorable moments of Morlac?

I really liked the fact that I had three story themes interwoven together and containing everything that I ask from s fantasy book.

Which character – as performed by Nicholas Patrella – was your favourite?

Morgan was my favourite. The description of him, his actions, his unique attributes all make him a great character. .

Yes. I really got into it.

Story in a Story

I got this book via audiobook boom. I liked the way the story started as a story inside of a story. Sorcery played a major part in the story and I was glad to see that it was overcome by the greatest gift love. Morlac is an epic tale of adventure. The narration was very well done as well.

I'm glad I gave this another chance

I hope the narrator views this review as constructive criticism. I'm not here to smash your dreams of being a narrator to pulp. I hope you take this and chew on it, and use it going forward.

The first time I listened to this, I had to quit after only a few chapters. I put it on the back burner, listened to another book, and attempted to pick it back up. Again, no dice. It just wasn't working for me. It was a shame too, because the concept of this story is interesting - a sea turtle magically transmogrified into a human warrior. To add to the mystery he seemed to be reincarnated over and over. His seemingly endlessly recurring task? Become a Captain of the Guard for a besieged kingdom.

It is a tale of reincarnation, of revenge and lost loves. And it would have been great to finish it.

Looking on Audible, I can see this is the narrator's 8th audio book. I'm not sure if the narrator does his own editing/mastering, or farms it out. If he farms it out, he should fire the editor. Leveling in this project is atrocious. There were times listening while I was commuting in my car where I couldn't hear what the characters were saying compared to the narration, and had to turn up the volume. Then a few minutes later the volume of a pick-up blew out my ears drums! Towards the last third of the book there were sound artifacts between sentences, sometimes cutting off the beginning of a word. Very annoying and distracting. Applying compression or a limiter during mastering will fix this easily. After eight books, mastering should be higher priority.

So I shelved this book for a month and went on with others, thinking this would be the first book that I couldn't finish and review. It wasn't until I started receiving some critical reviews on my own first audio book that my opinion started to soften. I should give this book and the narrator another chance. So I picked it up again and started from the beginning, this time with a less critical ear.

The narrator does have a lot of positive qualities. His character voices were great. Really great. And this boy can act, really act. I imagine him with a background in some sort of Rennaisance fair acting troupe. But at times he talked so fast he slurred his words which was very distracting. Come on man, slow down! Enunciate!

The book is long, almost 13 hours. I think an hour could have easily been shaved off by removing the number of locations the group of heroes had to travel to seek what they were looking for. One could consider each location as a mini-quest to accomplish the larger plot of the book. I'm not sure what the magic number is, but the number of mini-quests was too long, and it started becoming apparant when YET AGAIN they had to go on another mini-quest immediately after completing the previous.

Does all of this criticism mean you as the prospective listener should avoice this book? Not at all. The story is worth a listen. I'm glad I gave it another chance. The whole story reminded me of an RPG in book form - not a LitRPG title specifically, but the take could have almost been lifted from a D&D session.

This audio book was gifted to me by the narrator at no cost in exchange for an unbiased review.

was definitely interesting and a different sort of story. nothing like what i have read before

Good, fun story with interesting characters and a story that kept my attention easily.

Narrator ruins it for me.

Would you try another book from Gary Alan Ruse and/or Nicholas Patrella?

I would give either a shot. Read the book when I was young and loved it. Having read the printed book, Nicholas Patrella's voice did NOT fit the voice in my head. Made it nearly unlistenable. Considering this book is about hardened warriors, his voice just didn't fit for me. His accents weren't bad, but the general narration and the voice of the main character didn't do it for me. Perhaps his narration on another story would be better for me.

Would you be willing to try another one of Nicholas Patrella’s performances?

Maybe in another genre?

Disappointment. Because I was so excited to have the audiobook of an old favorite, and I was immediately disappointed in the narrator's rendition. The story itself is an old favorite.

This story, from my recollection, is about hardened warriors weathered by service to an evil magician. I could not get behind this narrator relaying an epic fantasy story. His voice was too.... modern? We listen to a lot of audiobooks, and most of them are high or epic fantasy. There have been very few that the narrator just didn't work for. The failing in this instance could be from my previous multiple readings of the physical book. When you love a story, you really want the narration to bring that story to life well. At the time of this review, I have not made it past chapter three. I find it almost unbearable to listen to. I will probably soldier through... but only because I am out of other things to listen to. Finding the right voice for a story is so important.

Would you consider the audio edition of Morlac to be better than the print version?

Did not read the printed version

Have you listened to any of Nicholas Patrella’s other performances before? How does this one compare?

No, Nicholas Patrella did great with the narration


Morlac, the male lead, is turned from a sea turtle into of a warrior by the

Green Magician in order to lead a small group against a War Lord.

Afterwards, Morlac tries to find the Green Magician which is the true beginning of his journey.

I don't want to say too much, Overall, an Interesting Science Fiction Fantasy..


Nicholas Patrella did well with the narration.

With a nod to Robert E. Howard

I have allays been a fan of Sword and Sorcery fantasy. Gary Alan Ruse has penned an admirable addition to the genre and the efforts of Nicholas Patrella at the microphone added depth with his precise character delineation and accents. Why 4 stars? Well having just finished one of John Norman's Gor novels (one of my favorite series both in print and audibly presented) the comparison was down to preference. This book was enjoyable and I will look for more from Gary Alan Ruse. I was voluntarily provided this free review copy audiobook by the author, narrator, or publisher and am grateful to have had the opportunity to review it.