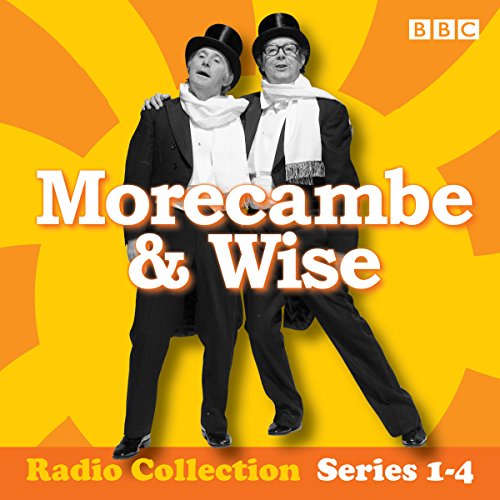 By: Eddie Braben
Narrated by: Eric Morecambe,Ernie Wise
Try for £0.00

Between 1975 and 1978, when they were at the peak of their popularity on television, Morecambe and Wise also starred in their own radio series, with each episode scripted by the one and only Eddie Braben.

So pull back the stage curtain and settle down to nine hours of sparkling comedy, in the company of ‘the tall one with glasses’ and ‘the one with the short, fat, hairy legs’. Honestly, you can’t see the join.

The Entertainers: Morecambe & Wise: Two of a Kind
Presented by Frank Dixon
Produced by Herbert Smith

The comedy in this release reflects the attitudes and conventions of the era in which it was first broadcast.

You can't see the join!

Absolutely superb. A wonderful taster of the genius that was Morecambe and Wise. Quite a few of these were TV skits that have been adapted for radio.

Eddie Braben scripts, Eric and Ern at their peak and some great guests like Penelope Keith. Careful listening outdoors, you will laugh out loud and get stared at.

M. & Wise, without the visuals

A set of 18 pleasant interludes, but nothing memorable. Without the visual mannerisms and humour of Eric Morecambe it ranks a very limited second to their TV shows.

As a lover of Morecambe and Wise show.
It was good to here some of there are radio shows to..

Definitely of its time

I am a massive Morecambe & Wise fan so couldn't wait for this to come out. I have been driving my family nuts with M&W quotes all my life, but this has left me a little cold. I never listened to the radio series originally and based my experience solely from their TV career (and the odd dodgy movie). These radio episodes are full of seriously dated sexist and mildly racist remarks (in fairness, they are recorded in the 70's). I am not a liberal tree-huger who usually get offended by these things, and indeed nothing in any of the episodes is meant with malice, but it does feel a little uncomfortable at times in a modern context. Additionally, and possibly more importantly, its not all that funny. You can hear gags hitting the ground and passing-away very publicly as the audience reacts with silence here and there. I assume these were broadcast weekly, so binge listening to them makes you realise how often the same, or at least incredibly similar jokes are re-used. This is not terrible, and the sound quality is very good, but you may want to remember your heroes with the fondness of hindsight and not revisit them in the context of the 21st century