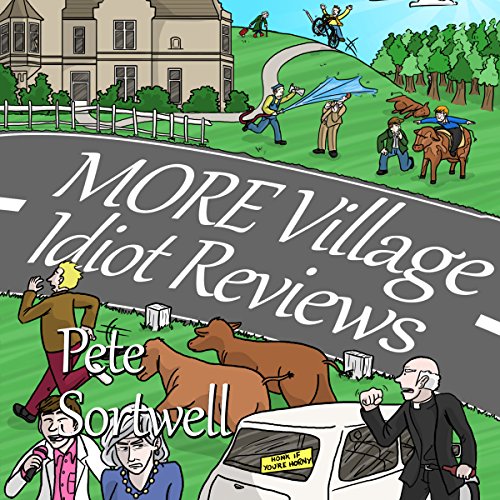 It's been a year since their last outing. Brian, Ethel, and Father Frederick are back with more village idiocy. Frederick has injured his nipples in a vicious moped accident whilst on his honeymoon and no longer feels like a man. He's taken up the drink again and is making people's lives a misery with his antics again. He can't work out why strange men keep following him while he's out drink-driving, though. Brian's concentrating on getting through married life while trying to find a hobby that doesn't hurt. His cousin Jeff (from The Office Idiot Reviews) has moved in for the summer and is on hand to help Brian with his assertiveness when he is bullied by the local biker, Jock. Ethel has discovered that it was Denny who made her shopping trolley explode last year and with Denny now an adult and living outside the safety of the children's home, it won't be long before she exacts the revenge she's been after. Meanwhile a battle for power is taking place at the manor house. Lord Monty, who ordered his title from the Internet, is in a battle of wills with his gamekeeper, Chopper. It's a never ending struggle which, time after time, leaves Monty either out of pocket, in pain or soaking wet. Written entirely in the form of product reviews, we guarantee you've never listened to a book quite like this before. (Unless you listened to the first one.) Hilarious and wholly original, More Village Idiot Reviews introduces the most bonkers set of countryside dwellers you've ever had the pleasure of meeting.

No More Village Idiot Reviews For Me シ

If you could sum up More Village Idiot Reviews in three words, what would they be?

What was one of the most memorable moments of More Village Idiot Reviews?

I don't know if I can answer this without sounding like a fangirl, but here goes:I loved the entire thing! Listening to the further exploits of Brian and Janet, Father Frederick and Mary, Ethel, Denny, Jock, Chopper, et al... Just totally slayed me! I was listening to this yesterday, as I was being towed out of the mud I'd got bogged down in (as an attempted shortcut) and instead of feeling angry about being duped about the state of the road, I found myself laughing heartily at the exploits of these village people!

What does Chris Dabbs bring to the story that you wouldn’t experience if you just read the book?

Oh, God, the VOICES! This was made ten times as hilarious by the voice of the narrator!

I don't think there was anything particularly "moving", unless you count people's bowels...lol!

Just that this series is hilarious, and I am looking forward to listening to more of this author. I haven't laughed so hard for a long time!

I like the fact that it is light entertainment on tap. The first book was better I thought.

If you want a good laugh I recommend this book specially audio book It made ten times as hilarious by the voice of the narrator!
Frederick has a tragic accident, it is hard not to laugh [I know I know... its not nice to laugh at someone's misfortune] but it is SO funny.
Pete Sortwell returns with More Village Idiot Reviews bringing back some of the characters from his Village Idiot Reviews.
I got this book from Audiobook Blast at no cast, in exchange for fair review.

I enjoyed this as much as the first book!Listening in on peoples lives 1 letter at a time!lol The narrator,Charles Dabbs was brilliant!

This continues from The Village Idiot Reviews with some of the same characters and some new ones.

What a unique way of telling a story! The entire story is told via short anecdotes in the form of product reviews written by various characters who live in a small village. These reviews were humorous and not always using the product in the way it was intended. I didn't like any of the characters but I found it interesting to see how all the products fit together.

I listened to the audiobook edition which I received free in exchange for an honest review. Chris Dabbs did a fantastic job of narrating, speaking clearly and at a good pace. He used different voices for the different characters.

So this is the best book yet. I laughed out loud so many times. My favorite review in this book was about "the Devil" chicken. The man padded his body up good with pillows and couch cushions to go see the chicken who attacked him the last time her saw it! During the last attack, the police had to taser the chicken. HAHAHA

This book is the 2nd volume of Village Idiot Reviews. It is a consolidation of silly reviews left by others who bought and reviewed products. It is what they used the products for that is so funny. This book will have you in stitches. The author has a way of finding just the right reviews and wording things in a way that we can read between the lines - it's not what the products were meant to be used for.

The author , Pete Sortwell did a fantastic hob on this book. He has a way of finding the funniest and / or silliest things and situations and using them in his books. This authors books reminds me of TV shows like Top 20 dumbest Criminals and Top 20 funniest videos and so on. The narrator, Chris Dabbs did an awesome job delivering us flawless multiple voices , accents and emotions! Great job to you both! Pete you are a hilarious comedian!