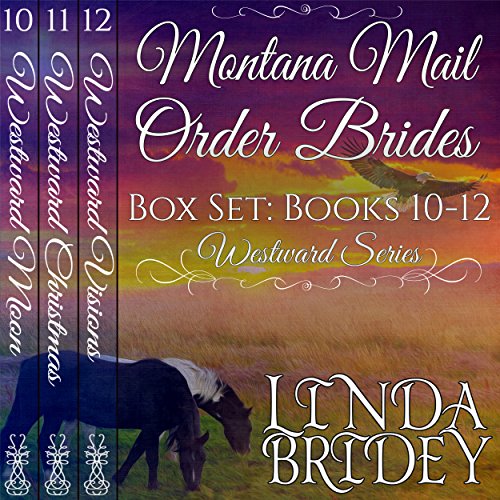 Books 10-12 in the series that critics describe as "a wonderful blend of hope, humor, passion, romance, suspense, forgiveness and the stories make you feel like you are actually there!"

I very much enjoy J. Scott Bennett's narration of this series. The other narrator on the box set, Tracy Tenney, really messy up the flow of the series.

I was given this free review copy audiobook at my request and have voluntarily left this review.
I have totally enjoyed this continuing saga of the Samuel's family! I love how with each book the author picks a new family member or close friend, and focuses on them and how they fit into the family dynamics and expands on their life and how they impact the whole community. I frequently find myself snickering over some incident that taken place. Well written!!!

Book 10 is about the troubles and obstacles that jack and sparrow’s love for each other must go through.

Book 12 reckless and whispering brook. And their blending of the two tribes

All were very good books and enjoyable to listen, I’m not sure which one I enjoyed more.

Where did the narrator go?????

I have listened to Scott Bennett superbly tell the story of a fun family and small town for ten books... and then suddenly Tracy Tenney takes over with super annoying pronunciations (short a sound for Sasha) ugh.

The story is great, character development was phenomenal.

I love this series! The narration was great and kept me entertained. The author did an excellent job with the character builds and plot. I love that you get to read everyone's individual stories. I look forward to reading the other books in this series. I was given this free review copy audiobook at my request and have voluntarily left this review.

Narration brought this to life by Bennett and Tenney of the hardship and the culture of the Lakota Indians, and where fathers, decided.your fate.nnA letter she dared to write, and trusting someday she would see who she did love again.Fascinating and well written of times in the 1800’s.

could to revist after reading the book. great story line. suggeat reading all series to enjoy.

Starting over with new dreams .

this series is about strong women willing to go after what they want and do what they believe is right to have a happy life .
Even if that means saying goodbye to the ones's you love , your dreams , and starting over regardless the price .
Sweet romance , western drama . and the bitter turns to sweet . Sacrifice for love .
This box set will pull at your heart strings and you might even shed a tear .
A great box set to add to the other collections in the series .
The narrators did an outstanding job .
Very creative with their voices .
Five stars ....

These books make you want to live in a town like this with family like these people. It is so good hearing each person story. Loved it.
I was given this book for my honest review.

Loved all but the second one truly a delighted fun

I have started the next audio box-set in this series, it is filled with danger, loss, pain and sorrow along with smiles, laughs and love. This set is just as great as the books before, it is so nice to see old family and learn stories of old and new characters. The narration was done by two different narrators the first and last book is done by the same narration the review for him will be at the bottom for both books.

Westward Moon
Takes us back a few years when the Indian split over beliefs and wants. Jack and Sparrow fell deeply in love only to lose each other when her father started his own tribe and moved far away. Many years later Sparrow is forced to marry a man she doesn’t love only to find out he is mean and abusive. By their law the Indian woman can divorce their husbands but her husband and her father won’t agree which leaves only one choice for Sparrow that is to run hard and fast back to the man she has always loved. What follow are the trials of that love with many stepping stones along the way leaving blood and death in its way.

The story is very heartbreaking with some very touching scenes. I thought the author did a wonderful job bring the story to life pulling in the reader and making them a part of the story. I am very much looking forward to listening to the rest of the box set to see where this series goes.

Westward Christmas
This is not one of my favorite books in this series, it was a good addition to the series and gives closure to the romance of Ben’s and Sasha’s. As I am sure back then there was sex before marriage, more so if the woman had already been married. I thought this story showed more of how that issue was handled back then. The author never really explained to me about Ben’s tempter, I was a little confused at why and how it built, the author does say it was more of a drinking thing but doesn’t give much background on it. I thought it added a lot to the series but not as a standalone book.

The narrator I didn’t really care for her normal accent or normal voice carried throughout on many of the characters and you really could not see who was talking. It sounded more like just reading and not being in character voice. She does give true emotion, there are no repeating of words, I found no background sounds or volume changes. Really she did a good job all but for the character voices. For me she took away from the story.


Westward Visions
I really loved the characters in this story it show how hard it was for not only the whites but the Indians which have mixed blood. They really have a hard time in both worlds, they just do not fit, neither side wants a spouse with mixed blood, they are looked down on I think more so for the woman since no man really wants a mixed woman. I thought the author did a wonderful job showing how hard life can be for them as well as the life they lead. The story is about trust, honor and believing in the Indian way. I loved the humor, and how the author shows how easy it is to distrust and what the cause of that is. So far this is my favorite of the series. I love Reckless and have done so throughout this series, he has had love interest before and lost love. For him to find a woman he can love that goes with his beliefs and willing to live the way he does but also be able to live in the Whiteman’s world is just amazing. The author really pulled me in and made it very easy to picture the scenes.
Reckless finally finds a woman who he can love, there are trying times with her family, as well as getting to know each other. What follows is a true romantic romance with turmoil and fear along with love and passion. When the tribe looses their home Reckless works on finding a new one, there are many nonbelievers, that causes hardship not only in his marriage but with his tribe. It is a passionate story, with love, power, lose and trust issues. There was nothing I didn’t like about this story from the characters to the plot which is full of emotion and humor.

The narrator does a wonderful job delivering true emotions to the story, you always know who is talking and just what that are feeling. There are no repeating of words, no background noise just a truly enjoyable listen that pulls you in. His normal voice is very pleasant as well as his character voices, his voice is easy to listen to and gave me many hours of enjoyment. He made me feel the pain and sorrow each character is going through as well as the excitement and danger that comes with this story. With his narration he made me understand why some people act the way they do and that not everything is as it seems. For me he bought this story to life making it easy to picture each scene as it was happening. His performance was top of the line pulling me in giving me a listen I couldn’t put down. If you haven’t listened to any of his audios you don’t know what you are missing.