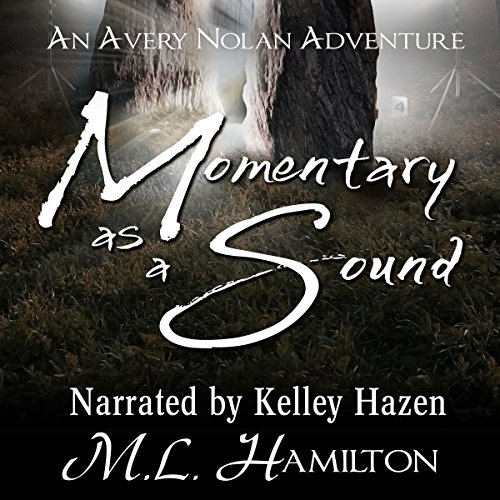 Momentary as a Sound

Avery Nolan worried for her friend, Agent Graham Braddock, when he chose to stay behind in the Frostfell, but she never expected to see him show up at her door, asking for her help.

As she feared, scientists have found a way into the Greensward. Avery and Duncan agree to accompany Braddock back to the land they swore never to visit again so they can stop a war that will tear apart both worlds.

However, Avery’s father, Alberon, discovers his daughter’s involvement and has plans of his own. Alberon isn’t worried about preventing genocide as much as he’s interested in getting to know the daughter he’d lost so long ago.

What listeners say about Momentary as a Sound

First off, this is the forth book in the series. The previous books should be read/listened to first to maximise the enjoyment of the story. The plot continues with each subsequent book.

If you have read the other books in the series, you probably don't need this review. This book is just as adventurous and funny as the previous books, with the same lovable but quirky characters. In fact, this may be the forth book but it just CANNOT be the last book. I am not ready to say bye to Avery, the Aunts, Duncan, Bae and Basil.

This book gives the reader more encounters with the "aliens" from the other dimension and the various government agents, as well as the odd moments when things seem perfectly normal but really they aren't. The entire world is in jeopardy this time as Avery and Duncan have to make some difficult decisions. But for each challenge they face, the Aunts are there to contribute their craziness and Bae his sweet innocence.

I thoroughly enjoyed this series. It was so easy to commit to the characters. The plot is a bit strange and is all the more special for its madness!

Avery Nolan continues to face adversity head-on. First, she discovers no one told her about the Spring Pageant which is less than three weeks away or that she’s in charge of it or that her students are the headliners! In true Avery fashion, she manages to pull it off with resounding success. Then her father makes an appearance as does Braddock as does Lysander and then she discovers a deep dark secret about Duncan and her mother!

Then you have scientists meddling and her father visiting, and Avery’s mind and emotions are spinning. This is a pivotal story for Avery as she discovers many emotional secrets that could rip her world apart. I enjoy how ML Hamilton has taken Avery and put her into stressful situations and how she has managed to beat herself up as well as solve whatever adversity she is facing. While it is a moment of tremendous growth for Avery, I am sad this is the last.

This book was more emotional turmoil and upheaval for Avery personally but one that shows growth and understanding. Alberon’s presence is perfectly introduced and loved the ending!!!! What more could a potential husband hope for?????

As always, Kelley Hazen, has performed the book skillfully and with passion. The emotional turmoil was perfectly performed by Hazen – I couldn’t help but become teary-eyed (and I hate to cry!!). Hazen has allowed us to see the inner Avery that the words don’t quite convey all the time – as the narrator, Hazen brought Avery to life.

I have thoroughly enjoyed every single Avery Nolan Adventure published. It is sad that Avery’s story is over.

I did not experience any issues with the quality or production of this audiobook.

Audiobook was provided for review by the author/narrator/publisher.
Please find this complete review and many others at my review blog.
[If this review helped, please press YES. Thanks!]

An action-packed ending to the series:)

The final adventure in the Avery Nolan series brings us many surprises on the way to quite a satisfacory ending to the whole story.
Two strongest parts of the book for me? The spring pageant and Avery's father:) I really love the way the pageant kind of becomes a mountain Avery has to climb - and the way the preparations and rehearsals are described is hilarious, it just kept me smiling throughout that whole part. And then there's Avery's father, Alberon, the Dragon everyone fears... And yes, he is strong, powerful, fearsome, but he also has that childish curiosity of the world he's just getting to know and a tender side nobody but Avery is probably allowed to see...
The plotline, as with the other three parts, is quite fast-paced, logical and intriguing, and keeps you glued to the pages (player, in my case:)). There are a lot of action-packed moments, but there are also moments of emotional turmoil which will move your heart. In general, that's a great ending to Avery's story:)

The narration by Ms Hazen is perfect, probably the best of the four parts. Her interpretation of little Susan deserves an Oscar:), and she does equally well all the other voices.

I have really enjoyed this series by ML Hamilton. Avery Nolan is an endearing character and I love her relationship with Bae and Basil in this book. The imagery is great and so many questions were answered. This book is a standalone listen. Kelley Hazen does this book's narration justice. I love the distinguishable voices she gives the various characters and how she adds the right emotions to her performance. I will definitely listen to more books by this author and narrator.

I was voluntarily provided this free review copy audiobook by the narrator and found it very enjoyable. This is the fourth book in the series. Just when Avery thinks the worst thing she'll need to deal with is spring pageant, Braddock shows up at her door. After a trip back to the Greensward, Avery finds herself with an unexpected visitor, her father. This book ends the story well, answering all the questions and leaving the door open for more in the future. Between the story and the narration, you'll be won over.

Momentary as a Sound (Avery Nolan #4) was another great read by M.L. Hamilton. Graham chose to stay in the Frostfell in order for Avery, Duncan and Bay to be able to go back home. She is surprised when Graham shows back up to get duncan and Avery’s help. I enjoyed this great conclusion to their story and can’t wait to read more by M.L. Hamilton.